E-Mini Closing at High of Decade After Opening Near Low

There are only seven trading days left in the decade for the E-mini S&P 500, here are what the technicals look like according to Al Brooks.

The bulls want the month, the year, and the decade to close on the high. The E-mini S&P 500 will probably be sideways to up through yearend.

The monthly S&P 500 E-mini futures is forming its fourth consecutive bull bar in December. It is in a strong bull trend (see chart). 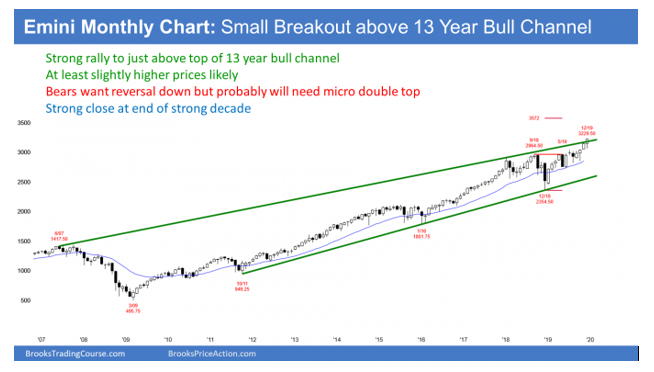 The year opened on its low and it is now near its high. The bulls want the year to close near its high. That would give traders confidence going into next month. It would increase the chance of higher prices over the next few months.

After four bull bars, the first reversal down will probably be minor. That means the best the bears can probably get over next few months is a one- to two-bar (month) pullback.

End of a very strong decade

I am not showing a yearly chart (where each bar is one year). However, the decade had several big bars followed by smaller bars. That means that the 10-year rally is in a parabolic wedge buy climax.

A climax eventually attracts profit-takers. Once it does, the chart typically enters a trading range, often for 10 or more bars (years, since I am talking about a yearly chart). That is why I have been saying that the E-mini will probably enter a trading range within a few years that could last for a decade. This is what happened in the 1970’s and after 2000.

While there is no top yet, the five to 10-year trading range will probably begin within three years. As hard as it might be to believe after an 11-year bull trend, traders should expect at least one 40% to 60% correction in the next decade.

The E-mini chart gapped up this week and rallied. It has been in a particularly strong bull trend for three months and there is no top (see chart). 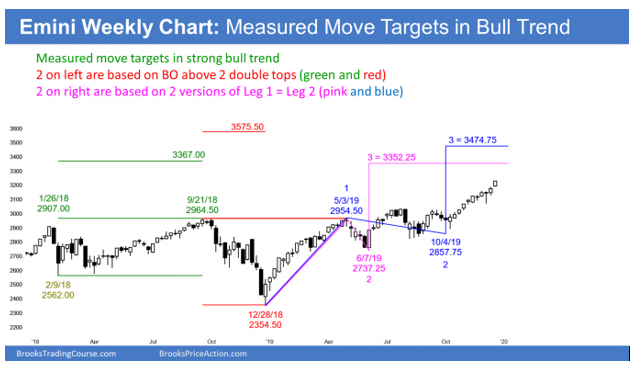 Every strong trend eventually attracts profit-takers. When the bull channel is tight, like this one, the initial profit-taking is usually brief. There might be a one- to three-week pullback at any time. The bears will probably need at least a micro double top before they can get a bigger pullback.

There was a big doji bar two weeks ago. That is often the first sign that the bulls are starting to take profits. When the bull trend resumes, as it did last week, the resumption often stalls within a few weeks from additional profit-taking. But the downside risk is small for at least a few weeks.

There are several ways to calculate measured move targets. No one knows in advance how many institutions will take profits at any of the targets. Traders will evaluate the strength of any rally to a target and then watch how the markets acts when it is near the target. Will it stall and enter a trading range? Will it reverse strongly? Will it break strongly above and quickly race up to the next target?

The simplest measured move projection is based on the height of the trading range. However, there are usually several possible highs and lows that one can use. Also, there are frequently smaller ranges within a trading range, and they also can lead to reliable targets. Sometimes there are obvious points that everyone will use. That is not the case here.

There was a double top in January and September 2018. After a failed breakout below in December 2018, the E-mini broke above. A measured up from the February 2018 neckline to the double top is 3367.00.

But the E-mini went sideways for many months and the bull trend did not clearly resume up until October 2019. I prefer using that low as the start of the second leg up. That measured move target is 3474.75.

These four targets are between about 3350 and 3575. It is reasonable to assume that the E-mini will be about 10% above this December’s close at some point in 2019. If so, it could reach all of the targets. Additional targets will become obvious as pullbacks come over the next many months.

Traders should try to find as many reasonable targets (also called magnets or resistance) as they can because targets often lead to profit-taking. Because they are magnets, the bulls will buy pullbacks, expecting the E-mini to get drawn to that resistance. Once at a magnet, there is often a reasonable short trade.

The daily E-mini chart gapped up on Monday, but then went sideways for three days. The bulls got a breakout on Thursday. There are now 3 legs up in the tight bull channel from the Dec. 3 low (see chart). 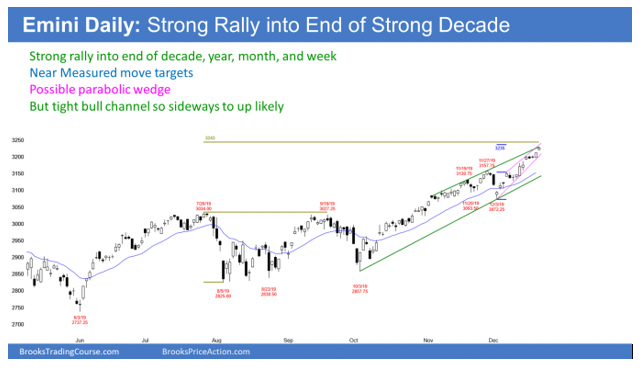 The rally is therefore a parabolic wedge buy climax. Will the bulls take profits and will the bears get a reversal down from here?

When the channel is tight like this, the first reversal down is typically minor. Furthermore, the bulls want the E-mini to close near the high of the month, the year, and the decade as a sign of strength. They have been in control on all of those time frames and are unlikely to give up with so little time left. That reduces the downside risk through yearend.

If the rally gets there, there will probably be some profit-taking. If it goes above, traders might instead be using the July 26 high for the measured move projection. The target from there is 3243. There are other targets on the weekly chart (see above).

Last week’s tape action began the fourth quarter and the month with a strong bullish bias. We ...