As my colleague Joe Perry noted earlier this morning and late last week, the spread of Coronavirus remains the single biggest driver for day-to-day movements across global markets.

While the spread of the virus in China is showing signs of stabilizing, at least to the extent official numbers can be believed, traders have been alarmed by the spread of the virus in other countries. The absolute number of cases outside of mainland China remain low, but the exponential growth in the number of international cases of COVID-19 (the technical name of the Coronavirus) is starting to look eerily similar to the timeline we saw on mainland China almost one month ago:

Compounded with the already dramatic interruptions to global supply chains in China, traders fear that a rapid spread of the disease to other major economies could be enough to temporarily tip global economic growth into contraction in the first half of the year. Japan, Italy/the Eurozone, and South Korea, where cases grew from 30 to 750 in the last week alone, are the current hotspots to watch.
Of course, the spread of the virus is impacting every major market, but oil has seen one of the strongest reactions. Crude benchmarks in both the United States and UK are trading down by more than 4% so far today. Focusing on Brent Crude, prices fell roughly 25% peak-to-trough in a month from early January to early February, and after staging a fierce recovery rally over the last two weeks, Brent is starting to look like its ready to begin another leg lower.

Technically speaking, Brent has only been able to recover to the shallow 38.2% Fibonacci retracement level of the previous drop, signaling that sellers remain in control. This level coincides with the 50-day exponential moving average and key psychological level at $60, lending it even more significance.

Over the last three days of last week, oil prices carved out a “evening star” candlestick pattern. For the uninitiated, an evening star formation is relatively rare candlestick formation created by a long bullish candle, followed a small-bodied reversal candle near the top of the first candle and completed by a long-bodied bearish candle. It represents a transition from short-term bullish to bearish momentum and often marks a near-term top in the market. 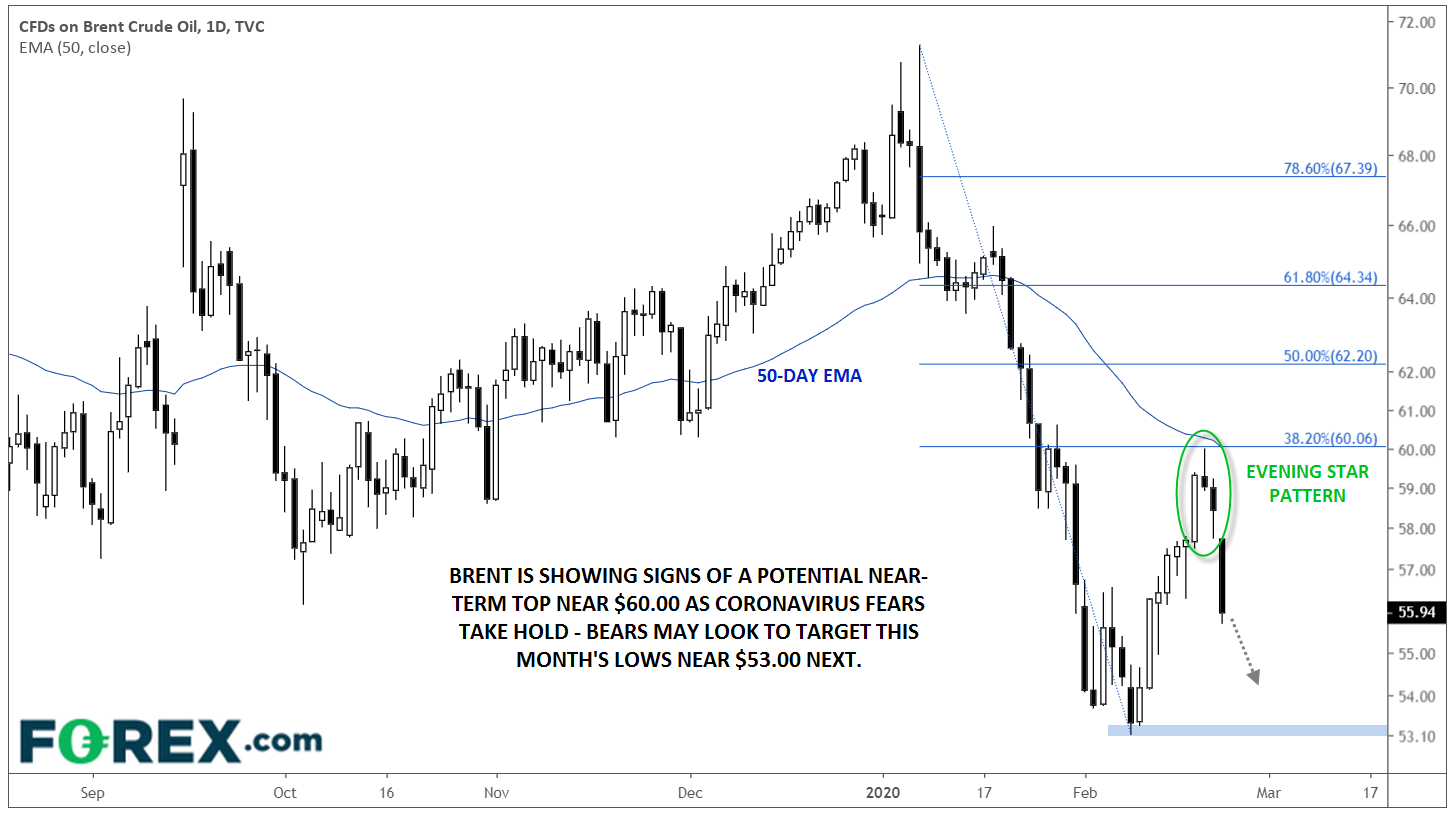 Moving forward, continued worrisome headlines around the spread of Coronavirus could take Brent crude oil down to retest the month’s lows near $53, which also represents the lowest price that oil has traded at since late 2018. If that level gives way, a continuation toward the 2.5-year lows near $50 may come next. At this point, the market’s near-term bearish bias will remain intact as long as prices remain below the key $60 level.