Market Is Stable With Biden as Clear Frontrunner

Al Brooks looks at the markets with a view on the presidential election.

Most people believe Biden is going to win the Presidential Election in November. That is already factored into the current price. Therefore, the market does not fear a Biden presidency. If it did, it would already be way down.

It is a mistake to believe that the stock market does worse when Democrats are president. In fact, the data shows the opposite (see chart below). The average gain under democrat presidents is greater than under Republican presidents. This chart shows the S&P 500 cash index under the five most recent presidents. 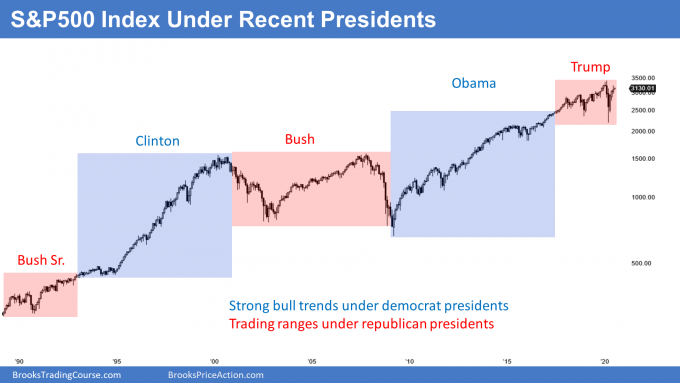 The lesson is that the market and the economy is too big and powerful for a president to have much influence. Yes, taxes tend to be higher when a Democrat is president (while deficits go up with Republicans), but there are countless other ways that a president can influence the market, and there are many other variables as well.

When you factor everything in, there is probably no significant difference. This is true even though the data shows that the market does better under Democrats. The sample size—given as the myriad of other variable — is too small to draw a conclusion other than it does not clearly matter.

Incidentally, this presupposes that President Trump will be the Republican candidate. I have been telling my friends for several weeks that I am not convinced he will continue to run. He hates to lose, and the numbers right now look bad.

Many traders are hesitant to buy up here until there is a vaccine. They know that it is possible that there will not be a vaccine, or at least not until late in 2021.

Everyone expects one early in 2021 and they will be disappointed if it is not ready. Their fear is that it will never be ready. The market is at a price consistent with a vaccine coming out in about six months.

f there is not going to be a vaccine, that would be horrible for the economy and therefore the stock market would reprice to a much lower level.

Traders knows that an approved vaccine is worthy of a special rally. That special rally might be a new all-time high. I believe there is an unspoken belief that the E-mini will not make a new high until after there is a vaccine.

If enough traders come to believe that, the market will sense a lack of buying at the current price. It would then have to fall to find buyers. It could reach my target zone below 2700 within a few months. Then, at the end of the year, if a vaccine got approved, the E-mini could rally to a new high.

IBM: The Right Timing for its New CEO
2 hours ago