Bonds: They Won't Ring the Bell at the Top

Bonds are still flirting with a new high, it may come, but the end of the long bull run is near, reports Al Brooks.

The U.S. 30 Year Bond futures are correcting down from a Spike and Channel Bull Trend on the daily chart. The selloff should test the June 16 low and then the bond futures will probably go sideways for a couple weeks.

The 30-year Treasury bond futures monthly chart in August totally reversed the July rally (see chart below). June was a buy signal bar. At the time, I said that it was a weak buy setup. This is because it was a doji bar and it was only three months after a reversal down from the biggest buy climax in history. I wrote many times that the most likely outcome was for the bond market to go sideways for the remainder of the year. This is still true. 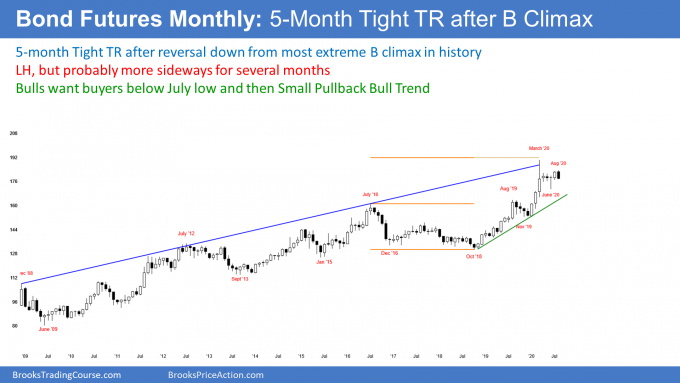 The bulls were hoping that July was going to be the start of a rally to a new high. I said that most traders would only believe that if August was a strong follow-through month. The wanted to see a second big bull bar closing on its high. Instead, August so far is a big bear bar trading at its low and totally reversed July. There are still two weeks left and the month could be back to neutral or even bullish by the end of the month, but that is unlikely.

Is the monthly chart now bearish? No. When a chart is sideways, it often has one or two strong bars up or down. Unless there are consecutive strong trend bars in either direction, the chart is more likely to go sideways.

How big will the pullback from the March buy climax be?

My default estimate for a pullback after a buy climax is that it has at least two legs sideways to down and lasts about 10 bars. If the trend tries to resume before then, most bulls are usually still in profit taking mode. They like to see the bears make two or three failed attempts at reversing the trend down before they will be eager to buy again.

So far, June has been the only leg down. The bulls are not certain that the bears have made their best effort yet. They want to see the bears try a couple of times and fail. There would then be either a double bottom bull flag or a wedge bull flag. By the time the pattern becomes clear, the exhausted bulls will be rested and more willing to buy again. The monthly chart has probably not corrected long enough for traders to expect the bull trend to resume.

Will the bull trend resume?

Does the bull trend have to resume? Not at all. This bull trend has lasted several decades. Most trends in the bond market last 20 to 30 years. Consequently, traders should be open to the prospect of a reversal down for a decade or more.

The bears have not done enough to make traders believe a bear trend has begun on the monthly chart, but the bulls have a problem. They can maybe get one more high but probably not much more. A new high means interest rates will fall further. People will wonder if President Trump will get his way and get negative rates.

But I have said many times that Americans will not accept negative interest rates. Too many retirees depend on interest bearing accounts. And there are too many retirees for politicians to take that income away.

The daily bond futures rallied sharply to the June 11 high from a sell climax that ended with the June 5 low. That bull reversal was a spike up. After pulling back for three days, the rally converted to a bull channel (see chart below). 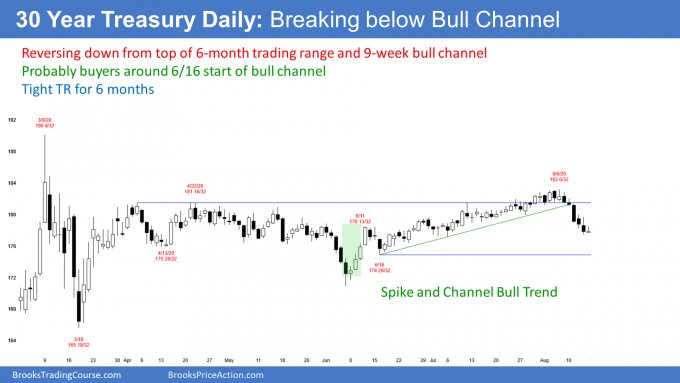 The Spike and Channel Bull Trend ended with a wedge buy climax on Aug. 6. The bond futures sold off sharply this week.

Support is at the start of the bull channel

The target is the start of the bull channel. That is the June 16 low of 174 29/32. Once the selloff reaches around that support, traders expect a bounce and then a trading range. They then watch for the next pattern to develop from within that trading range.

Will this selloff follow the textbook path that I just outlined? Nothing ever happens as expected. However, the overall concept will probably unfold. Traders expect a couple legs down to support and then confusion, which means a trading range for a couple weeks.

Can the selloff continue down to the June 5 sell climax low or even break strongly below it? Anything is possible, but a trading range will probably begin within a week. This is consistent with the monthly chart where the five-month trading range could last all year.