2020 will go down as one of the strangest years in investing history. We've seen a bit of everything, observes Jay Soloff of Investors Alley.

There's been a full-on crash and recovery (in stocks). We have a company currently worth over $2 trillion. There have even been stocks with no revenues that have been worth over $20 billion (according to the market). And of course, we've had crazy amounts of stock buying in bankrupt companies.

We've also seen a fair number of big-name IPOs, especially in the tech space. Snowflake (SNOW) and Palantir (PLTR) are two of the bigger ones to date. Related to that, mergers and acquisitions are once again on the rise. Both tech and financial companies have been active in the past year in this regard.

One area where we're starting to see a lot of consolidation is in the semiconductor space. Intel (INTC), once the dominant market leader, has been steadily losing ground. Competitors, sensing the opportunity, are gobbling up smaller companies in an effort to compete.

Now, it seems like Advanced Micro Devices (AMD) wants a shot at the crown. News broke last week that AMD is interested in buying Xilinx (XLNX) in a potential $30 billion deal. There does not appear to be a definitive agreement in place as of this writing. In fact, it’s possible XLNX isn’t interested in being acquired at all. 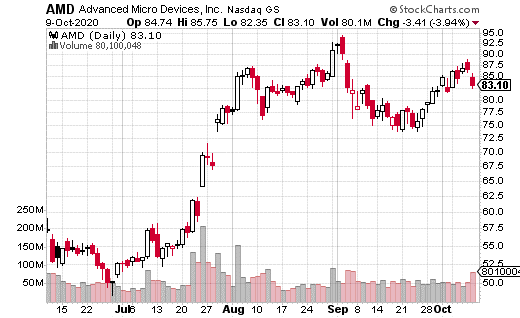 XLNX, which focuses on programmable chips mostly used in telecom, isn’t necessarily the best fit for AMD, a central processor and graphics card producer. Nevertheless, AMD has had a great year so far and may be looking to expand its empire.

With weakness in INTC, AMD may particularly be inclined to diversify its offerings. Let's also not forget that money is cheap right now for businesses (ultra-low rates), which helps drive acquisitions. Still, it doesn't mean shareholders in either company will definitely want to go through with the deal.

What this means is there could be a lot of movement in the stock prices of AMD and XLNX over the next several weeks. However, the action in the options market could be even more important in terms of signaling.

Focusing on XLNX, there was quite a bit of bullish action on the day the acquisition news broke. The stock price immediately went up to the $30 billion market cap level (since that's what the financial media was reporting as the alleged deal price). 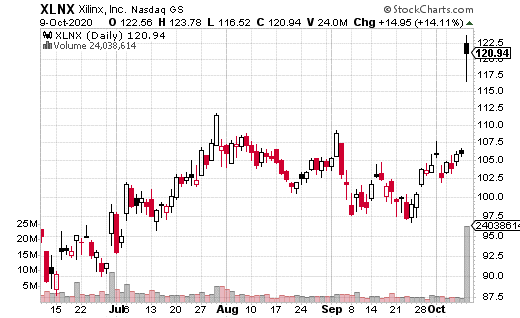 One interesting trade I came across suggests there may be more upside left in XLNX shares. A large call buyer purchased October 16th 135 calls for $0.69 with the stock price just under $120. These calls were purchased about 2,000 times. The stock would need to jump $15 in a week for the options to be in the money.

What's more likely, the call buyer is looking for a jump in XLNX early this week and is planning on closing the calls for a quick gain. It could purely be a bet that XLNX management comes out and says they are looking for a better price. Regardless, it will be intriguing to see how the stock and options react this week and as the news unfolds.

In the latest edition of Market Review, Larry Gaines of Power Cycle Trading discusses how to trade e...

The pullback in stocks over this past week closed the third and final gap of the Oct 10-12 buying sp...

Covered-call writing is a low-risk, cash-generating strategy. We can lower the risk to an even great...