I like to think of markets and securities in terms of three separate but inter-related dynamics: fundamentals, sentiment, and technicals, explains Jesse Felder of The Felder Report.

Fundamentals include things like earnings, net asset value, how those things are trending and valuation relative to them. Sentiment is simply how investors are feeling toward something and technicals are really just a way to analyze the price trend. Typically, a security or a market becomes expensive as a result of good fundamentals leading to positive sentiment and a strong uptrend.

The valuation eventually becomes overextended, sentiment becomes too bullish and momentum begins to wane. It is at this point the trend reverses. Sentiment will start to turn as the trend turns downward. Momentum will peak roughly midway through the trend. Valuation eventually becomes reasonable or even cheap and sentiment turns sour as a result of a prolonged downtrend. Eventually downside momentum wanes and the trend reverses again, usually just as sentiment bottoms out.

Each of these individual signals is valuable but not nearly as valuable as all three taken together.

“The chart shows the market value of all publicly traded securities as a percentage of the country’s business—that is, as a percentage of GNP. The ratio has certain limitations in telling you what you need to know. Still, it is probably the best single measure of where valuations stand at any given moment.” –Warren Buffett, December 10, 2001"

The single best measure of valuations, according to Warren Buffett, currently sits just off its highest reading in history. In other words, the stock market has never been as expensive as it is today, largely the product of soaring valuations amid deteriorating fundamentals. Not only does this mean that forward returns will likely be exceptionally poor, it means that downside risk has also never been greater than it is today. 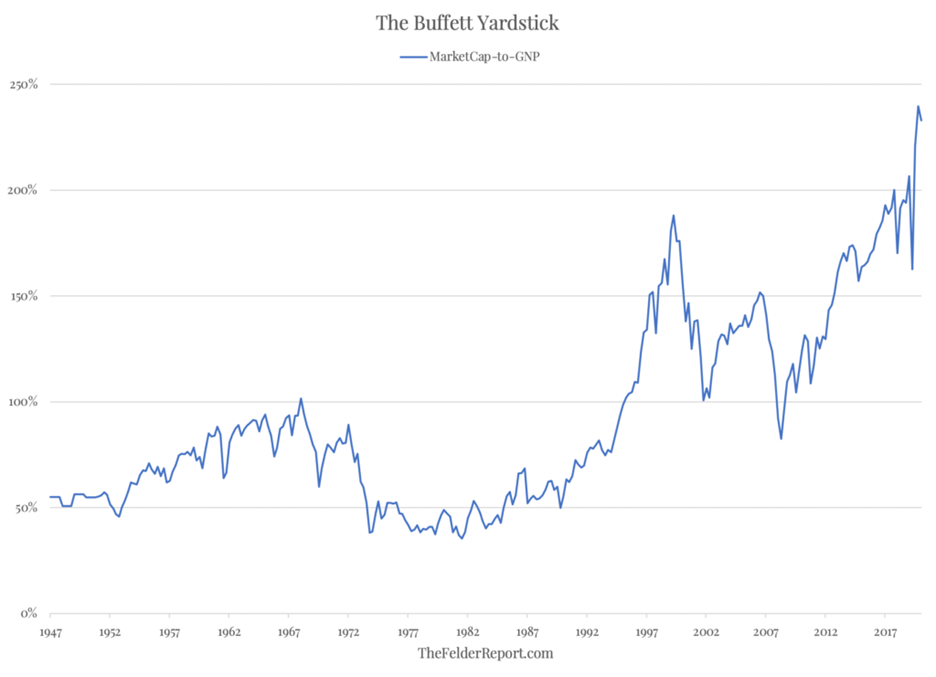 “Even the most circumspect friend of the market would concede that the volume of brokers’ loans—of loans collateraled by the securities purchased on margin—is a good index of the volume of speculation.” -John Kenneth Galbraith, The Great Crash 1929"

If the level of margin debt is indicative of the “volume of speculation” then we might infer that, just as we are witnessing unprecedented valuations, those extreme prices have been driven by extreme greed, the likes of which we haven’t seen in generations, if ever before.

“For me, technical analysis is like a thermometer. Fundamentalists who say they are not going to pay any attention to the charts are like a doctor who says he’s not going to take a patient’s temperature. But, of course, that would be sheer folly. If you are a responsible participant in the market, you always want to know where the market is—whether it is hot and excitable, or cold and stagnant. You want to know everything you can about the market to give you an edge.” -Bruce Kovner, Market Wizards"

In analyzing the strength of the trend, we can use a very simply metric like RSI. In the case of 18-month RSI, oversold readings have proven to be good long-term entry points; Overbought readings, however, have merely indicated a strong uptrend that may last several more years. By this measure, the strength of the current uptrend peaked nearly three years ago and has only been weakening since, putting in a clear pattern of lower highs.

Together, these three indicators paint a picture of an extremely overvalued stock market, driven by a speculative euphoria even while the price trend is running out of steam. It is the textbook definition of “late cycle” in the stock market and suggests investors ought to exercise a great deal of caution towards equities as an asset class.