The Window for Bears Is Closing

It’s vitally important to trade what you see in front of you while at the same time taking a world view from 35,000 feet to see what might be coming next, explains Jeff Greenblatt of Lucas Wave International.

Consequently, I’ve been telling you for nearly two months the NASDAQ-100 (NDX) had to test that gap down on February 22. Finally, we are right there, and we are there at an interesting juncture in the progression of the market. We are now on the back end of the 261-day window to the bottom back in March 2020. Nothing yet has been decided unless you consider the fact bears have not been able to seriously feed on any of the other decision points over the past few weeks. If we don’t get a turn on Thursday or the next day, it will then look like we are dealing with the biggest bubble in the history of the market. 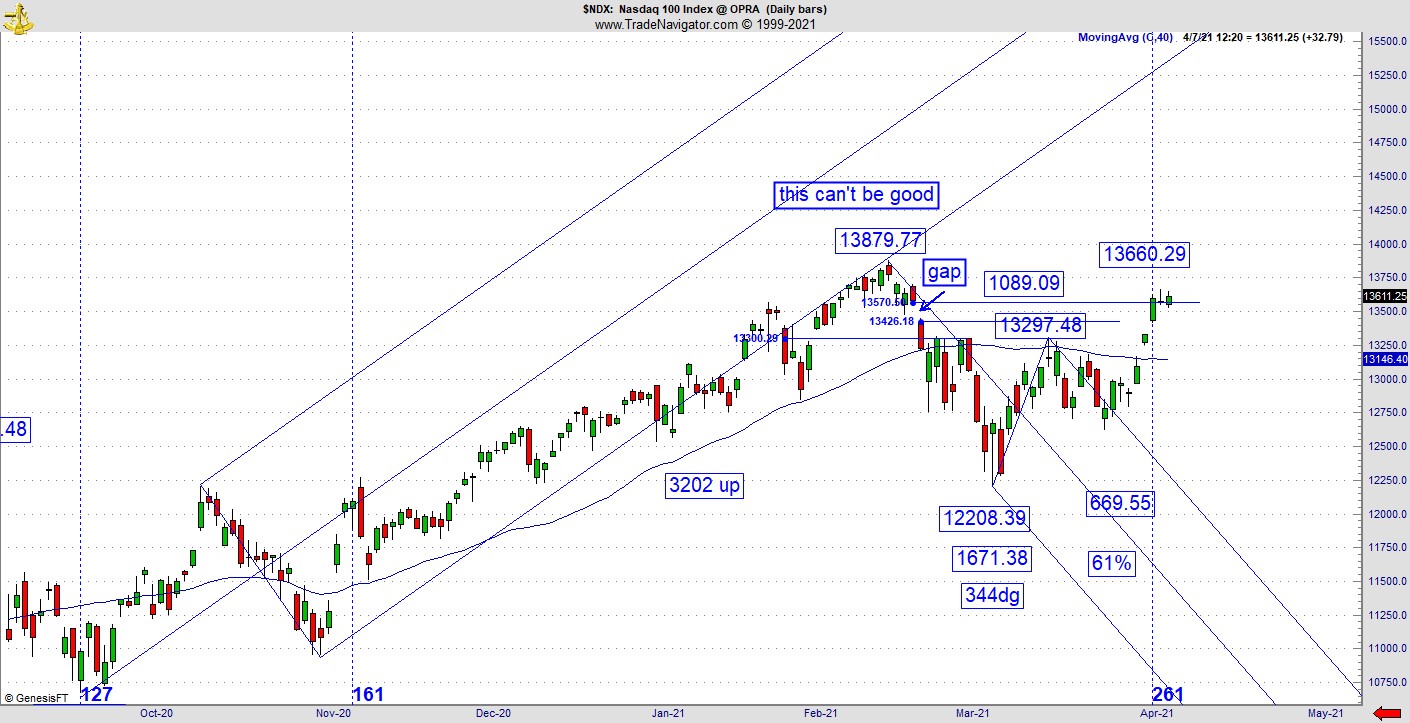 Biggest in stock market history? That’s saying a lot, but I’ve never seen a market continue to make highs over an extended period of time with worse economic news. Let’s not get started on the political state of the country. But they don’t call it a bubble. The new talking point for the media is the “reopen trade.” Oh yeah, they are reopening but I’m curious to see how far they will go with vaccine passports. It doesn’t seem American to violate a person’s right to their own body, does it? After all, that analogy worked fine for the past 50 years when it came to the right to choose issue. I’m not going to get into the politics of the vaccines here, but I just don’t know how regulating society into a two-tier system could be good for business. But in an era of endless government stimulus, the real question is how will the economy deal with all the inflation by virtue of the printing press before it absolutely collapses?

The next really interesting window coming up on the horizon is 161 months off the 2008 bottom for the US dollar, which comes August through October. Can we stay elevated through then? Nobody has the answer to that, but CNN posted a story on Monday about an unusual Russian troop buildup in their own Arctic area. Intelligence sources that I listen to (Israeli News Live) has been talking about the potential of a hot war with the Russians in the not-too-distant future. If CNN and Israeli News Live are on the same page, where there is smoke, there could be fire.

In the interim, the US dollar cooled off in recent days and if it is going to hit the upper resistance levels discussed last week, it needs to turn back up very soon.  The Ten Year is also holding the latest lows but hardly looks like it’s ready to stage a big rally. Oil is well off its high, and thus far, we haven’t seen a major acceleration in prices despite what happened in the Suez Canal. At the end of the discussion, the NDX test of its gap is still one of the best points to take the temperature of the market. If we don’t get the turn soon, bears are going to get locked out again and may not get a good feeding session until after the summer.

For my trading segment I want to show you how to prepare for the insanity of the morning open. If you trade the open on any of the E-mini or E-micro charts, you know crazy it could be. Most mornings it seems like its pure noise with random movements nobody can understand. It certainly feels that way. On some days, the action sets up within five minutes of the open either way. But sometimes you have to look at how the entire premarket sets up because the open is just part of the follow through. 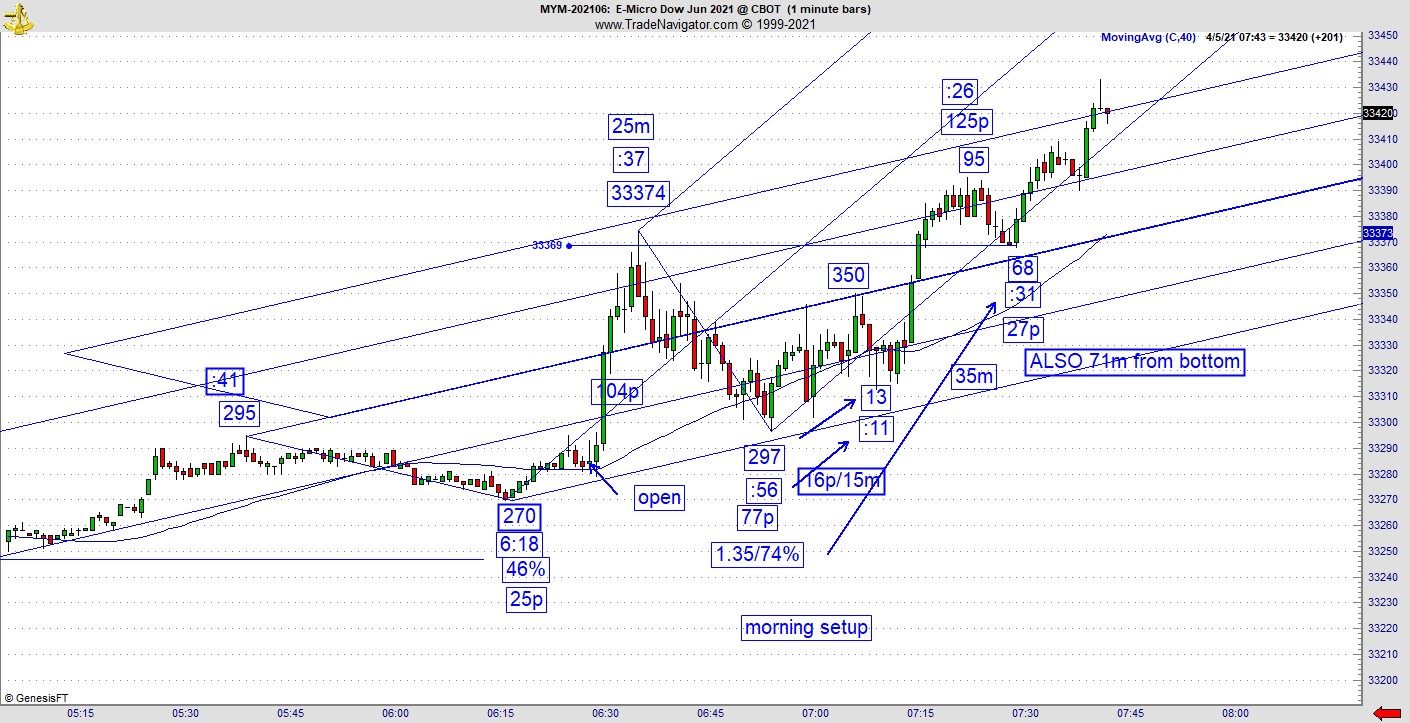 On this one-minute MYM chart there is a lot going on. You can see where I put the open. Prior to the open there is a 25-point pullback, which might not seem overly important until we see that big move up to 33374 is 25 minutes so there’s your price and time square out right at the top of the parallel channel line. From there the secondary low still in the first hour is a 74% retracement of the move up to 33374. From there we get a secondary low, which manifests at 16 points (297-313) in 15 minutes.

Later on, there is a polarity flip at the 33374 high, which used to resistance but turned into support as the reversal is 35 minutes from the secondary low at the 1.35/74% slash line (retracement and inverse). It’s also 71 minutes from the 270 low. I know the one- and five-minute Dow futures is extremely fast, challenging and could be very intimidating. Hopefully looking at it with price and time square outs slows the action down enough to understand. You can’t trade what you don’t understand so you have a fighting chance. These types of symmetries materialize every single day.

Going forward Thursday appears to be an important day as far as the 261 window is concerned. Concerning the Russia business, anything could happen so let’s pray it doesn’t.