NYAD and SPX Confirm New up Leg for Rally.

Market breadth (NYAD) and at least one major index, S&P 500 (SPX), made new highs to close last week as investors breathed a sigh of relief when the payroll numbers were weaker than expected, states Joe Duarte of In the Money Options.

Prior to Friday, the stock market was trying to figure out whether central banks were just talking about tapering QE or whether they were actually going to do it. But Friday’s weak numbers suggest that in the short term, central banks will more likely than not stick to current levels of QE. Still, the picture remains somewhat unclear given the potential for the weak number to increase the odds of fiscal stimulus and what that may do to inflation, which could force central banks to increase interest rates.

So, the big concern is still whether any tapering is coming and whether it will emerge sooner rather than later. Of course, when US Treasury Secretary and former Fed chief Janet Yellen suggests that interest rates “may” have to rise, along with Dallas Fed president Kaplan regularly discussing tapering to keep the economy from overheating, it makes the algos nervous and raised volatility. So now, we’ll have to see what the next round of Fed speakers says and what the central bank actually does.

So, even though Friday’s rally suggests that the bulls are back in charge, the bottom line is that for the stock market at the moment earnings, geopolitics, and any other external issues are not primary. In other words, only what the Fed does is important.

In addition, what it all boils down to from a trading standpoint are the following points:

Prior to Friday’s employment report, the 415 and 420 strike prices on SPY were the key points of contention for day traders and algos. But after the jobs number, the call buyers came in and finally took out the 420 area, which now becomes support as the 420-425 strike prices become the line in the sand.

The three options expirations (M, W, F) for the SPDR S&P 500 ETF (SPY) last week were mixed as put buyers were in charge for much of the week at the 415-418 strike prices. But once this resistance area gave on Friday it caused the dealers who had been selling puts and stocks to reverse course and buy stocks and stocks index futures to hedge their call sales. The net effect was that the market moved higher.

Remember, when call buyers force dealers to hedge their call option sales via stock and stock index futures purchases stocks tend to rise, as we saw on Friday. In contrast, earlier in the week, put buyers forced dealers to sell puts and then hedge their bets by selling stocks and selling index futures to hedge. The bottom line is that the options market, specifically weekly expirations on SPY continue to exert a credible influence on the overall stock market.

Winnebago Looks Set to Restart its Engine and Another Leg Up

Shares of RV giant Winnebago (WGO) look poised to break out of their recent consolidation pattern.

I spent last week on the road and while traveling through the desert southwest on the way to Santa Fe, I noticed several interesting details, which confirmed what I’ve noted over the last two years when discussing the MEL complex adaptive system composed of the Markets, the Economy, and People’s life decisions. And the one which seems to be accelerating is that of the population migration from high-tax states to low-tax states. 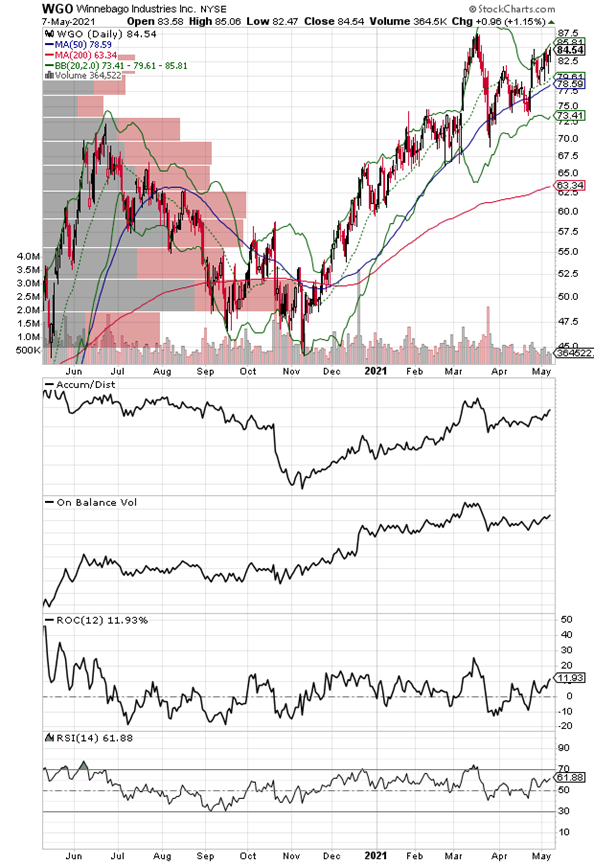 And while it’s easy to look at license plates on the road and assume that people are moving, recent census data confirms my observations of the last few years. Yet, it’s equally interesting to note that the number of trailers and RV’s is also rising fairly dramatically suggesting a potential secular change in recreation patterns. And although Winnebago’s most recent results, reported in March 2021, were quite impressive—34% sales growth, healthy gross margin growth, and an over 200% increase in net income—the market wasn’t impressed as they chose to focus on supply-chain issues for the company, which are particularly hard on their more expensive Class A motor homes and the shares went into a steep decline before entering a consolidation pattern.

Still, the headline reading bots seem to have missed the part about WGO’s assembly lines working overtime to meet demand despite the supply issues, and the fact that the order backlog is still robust and growing as was noted on the most recent earnings call: “We are not seeing any significant decline in retail momentum and outdoor product demand as we turn into the spring 2021 selling season.”

So, it looks as if the market got it wrong and that this correction is an opportunity to own the shares. Indeed, that bearish chart pattern is now reaching a bullish point as Accumulation Distribution (ADI) and On-Balance Volume (OBV) have recently turned up. Moreover, its Volume by Price (VBP) activity shows little resistance overhead above the nearby $87 area. Even better, recent news confirms the company’s bullish guidance as RV orders are once again rising dramatically, which I can confirm based on visual analysis from my recent travels.

In addition, with earnings not due until late June, the stock has plenty of time to factor in the potentially good news, as it looks to be doing at the moment. Thus, the bottom line is that barring an extraordinary external market event, the trends in MEL are starting to gather steam and it looks as if WGO is in an excellent position to profit from this interesting dynamic.

I have a position in WGO as of this writing.

The New York Stock Exchange Advance Decline line (NYAD) made a new high, which was confirmed by the S&P 500. This suggests that the uptrend, for now, remains intact. 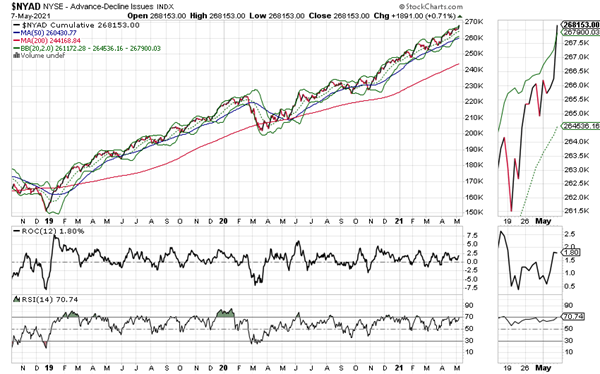 Indeed, the take-home message is that as long as NYAD continues to make new highs, remains above its 50- and 200-day moving averages and its corresponding RSI reading remains above 50, the trend remains up. This combined set of observations has been extremely reliable since 2016 and shows no signs of becoming unreliable as of this writing. 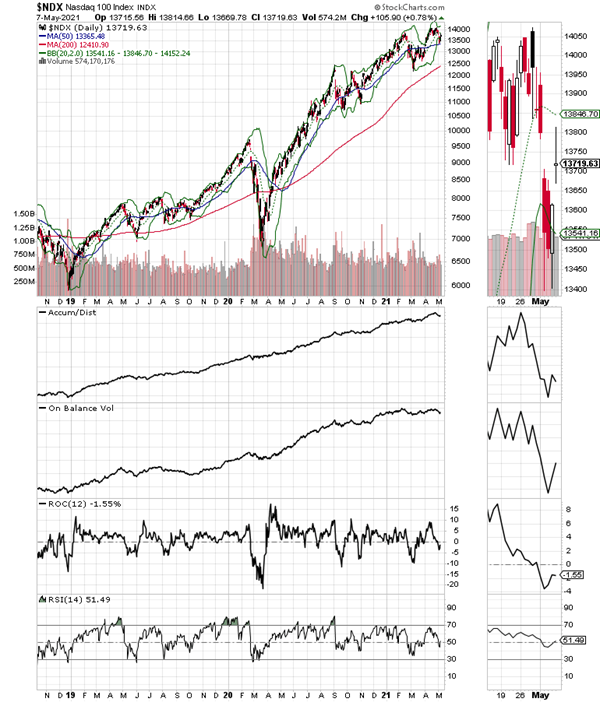 The Nasdaq 100 Index (NDX), is trying to find a tradeable bottom after several weeks of being the weakest area of the market. Still even though it bounced it was not able to close above its 20-day moving average. 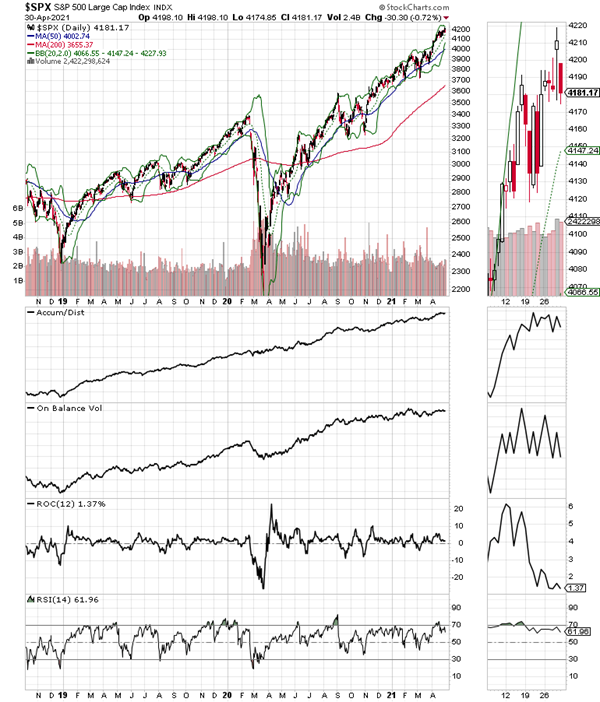 The S&P 500 finally delivered a new high and a breakout above 4220 with support remaining at 4000 to 4150. The index remains above its 20-, 50-, and 200-day moving averages and the new high not only confirmed the new high on NYAD but came on bullish action on Accumulation Distribution (ADI) and On-Balance Volume (OBV).