Stocks Set Up for a Rally

This could be one of those times when being a contrarian could pay off in a big way, explains Joe Duarte of In the Money Options.

Indeed, just as the wall of worries is being raised to new levels by fears of higher taxes and of the Fed cutting off QE, the stock market seems poised for a new up leg as the less than expected new jobs created number in the May employment report is eased fears of the Fed raising rates any time soon and Congress and the White House negotiate on taxes. Moreover, even as the rebound in jobs remains somewhat elusive, there are plenty of other economic concerns out there, especially the ongoing inflationary threat and the very real supply chain problems, which are starting to make it to the Fed’s consciousness as per the most recent Beige Book.

In fact, it’s well within the realm of possibilities that regardless of, or perhaps because of all the talk of some sort of “tapering,” the US central bank is nowhere near the point where they will reduce their QE push, anytime soon. This is likely due to fears of a stock market crash, which would spread to the economy given the tight connection between the markets, the economy, and people’s life decisions—the MEL complex.  As I’ve said many times, the stock market has become the central cog in the lives of many who either trade for a living, full or part time, or make financial decisions based on the state of their 401(k) plans.

Thus, unless something drastic happens, we may be getting to that point in the recent correction where short sellers who have been betting on the Fed reducing its QE, may find once again find themselves in a world of trouble as new money decides to move back into stocks as the options market is suggesting (see directly below).

In other words, once again as the wall of worry builds, it may pay off to be a contrarian. That is, of course, unless the Fed changes its mind and cuts or reduces QE, or if tax talks break down. If that happens, I expect that the COVID bear market of 2020 will seem like a fond memory in comparison to what could develop if the central bank cuts its cash infusions into the bond market.

Call buyers made some progress on the week ending on 6/4/21 suggesting that we may be starting to build the foundation of the next rally in stocks.

Regular readers must think I’m obsessed over the 420 strike price on options for the SPDR S&P 500 ETF (SPY) since I’ve been writing about it week after week. But as uncanny as it may seem that’s where the big decision point for options traders, and thus for the stock market has been. Specifically, 420 has been the strike price on the weekly SPY expirations (M,W,F) where the algos have increased their put buying regularly as a hedge with the net effect being that SPY is unable to move above that area. Of course, this is only part of the process involved because in order to hedge their bets against the rest of the market, the algos must sell stock and stock index futures at 420 or wherever the key decision point is in the market in order to cut their potential losses if the market is right and prices do rise. And it’s that hedge based selling by algos that causes the stall at this key chart point.

However, two weeks ago, even as the put volume was greater than the call volume at 420, the call volume at 421 and 422 rose and the net effect was that 420 started to become support. This faltered some in the early going of the first week of June, but by Friday, the call buyers started to gain ground. move is in the works. This suggests that we may be starting to build on the next rally.

As usual, however, there is always the possibility that the current set up breaks down. So, if SPY fails to stay above 420 we could see a retest of the recent lows or worse.

The consensus view is that the post COVID-19 pandemic semiconductor shortage will be in place at least until 2023. And while that may be so, on the supply side, the odds of a continuation of the increase in demand for semiconductors seems to be ignored as a potential factor in bringing money into the sector. Case in point. The shares of leading global chipmaker Taiwan Semiconductor (TSM) bottomed out a few weeks ago and are now hovering near the critical $120 area. 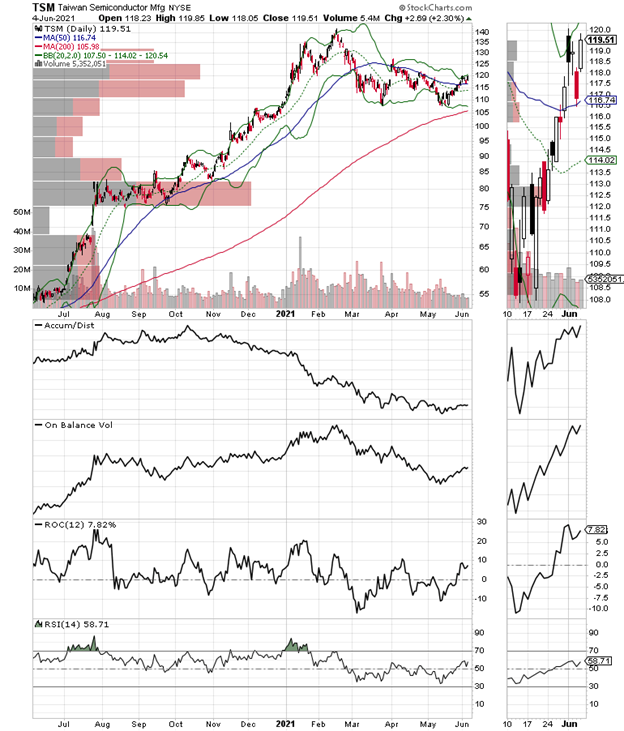 This suggests that while the news is cautionary, money is singing a different tune and moving into distressed chip stocks. More specifically, it would seem that the reason is pricing power. For one thing we have the 5-G dynamic unfolding, which is causing a slow and seemingly unnoticeable, but very steady buildout of infrastructure around the world. Next, PC demands continues to rise, perhaps more slowly than in 2020. But perhaps the biggest and least appreciated reason for ongoing chip demand is electric vehicles.

A quick trip through TSM’s earnings details shows that while smartphone chips account for 40% of their business, the growth was in PC chips, specifically high-performance computers (HPC—now 35% of business), automotive, and connectivity chips. Of the growth areas, automotive is the most interesting as it grew 32% year over year but only accounts for 4% of its business. What that means is that it’s likely that we are at the very early stages of the automotive chip sector cycle and that this is likely to be the next boom sector for the chip industry as cell phone growth slows. Moreover, citing customers inventory building to counter the chip shortage, TSM expects to grow at 20% versus 12% growth for the entire chip industry while citing generally upbeat guidance.

Technically, the stock looks poised to move higher, although there could be some fits and starts. Accumulation Distribution (ADI) suggests that there are still large short positions in place. Meanwhile On-Balance Volume (OBV) is moving steady higher, suggesting that buyers are getting into the stock after the recent selling spree over the ongoing chip shortage. This is a bullish combination, though, as short covering will likely move prices higher as more real buyers move in. Moreover, ADI has bottomed, which means that the shorts are starting to rethink their positions.

The key is what happens at $120-$125. A solid breakout above this congestion area could add 10-15% to the stock in a short period of time as the shorts panic.

I own shares in TSM as of this writing.

The New York Stock Exchange Advance Decline line (NYAD) continues to make new highs, which means the uptrend in stocks remains intact. However, we may see some backing and filling in the short term as NYAD has reached an overbought level as measured by RSI. 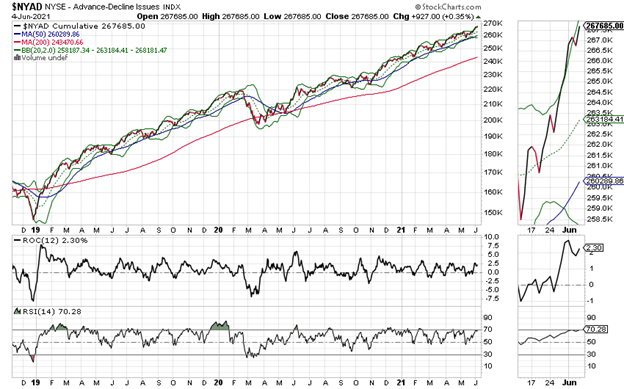 Remember, that as long as NYAD continues to make new highs, remains above its 50- and 200-day moving averages and its corresponding RSI reading remains above 50, the trend remains up. This combined set of observations has been extremely reliable since 2016 and shows no signs of becoming unreliable as of this writing.

The Nasdaq 100 index (NDX) survived tests of both its 20- and its 50-day moving averages and continues to look primed for a short squeeze. NDX has resistance near 14,000. However, the level of pessimism on tech stocks remains high, which means that any short squeeze could lead to new money moving in and another short squeeze. 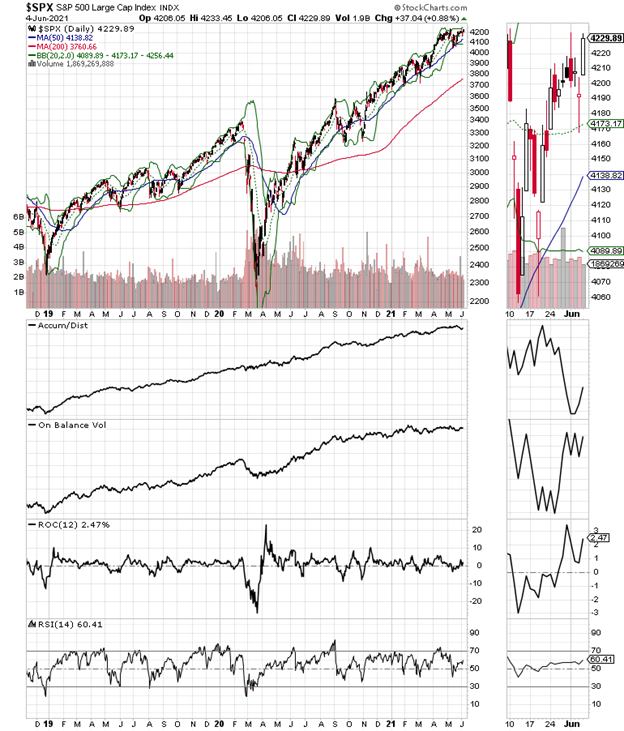 The apparent in the S&P 500 (SPX), ended the week just three points below the 4232 level, its prior closing high. Moreover, SPX is nowhere near overbought, which means it has plenty of potential firepower to blast through the resistance level and move decidedly higher.