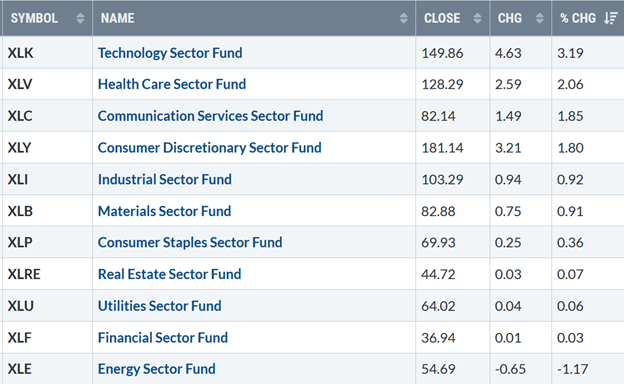 10-Year Treasury yields fell to 1.43%, its lowest level since early March, helping fuel the technology sector. A further decline will likely attract more buying into growth stocks and more profit-taking in value stocks, especially financials. On the other hand, rising rates would slow the gains of growth stocks.

Yields could fall to 1.27%, its lower channel objective (Figure 1 in green) over the next several weeks to months if yields stay below 1.57%.

Weekly market breadth was not as strong as it has been in recent weeks. The New York Stock Exchange Index (NYSE) had 1757 advances and 1734 declines. Nasdaq had negative breadth, 1969 advances, and 2657 declines.

If new lows begin to expand and have a succession of days over 95 (the 5/11 high), this will imply more risk and a shift in trend. On the other hand, if they remain low, the odds favor the resumption of the rally.

“Successful people are simply those with successful habits.” ~Brian Tracy 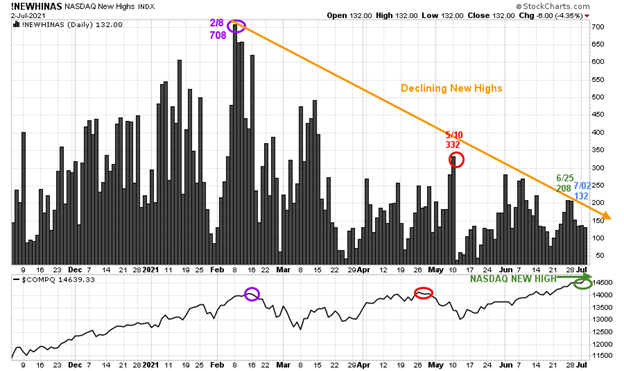 Despite the new high in the Nasdaq, stocks making new highs were only 132, decreasing and closing below the peak reading of 708 set on 2/8. Watch if new highs begins to increase or continue lower. If they can expand to over 332, this will be a clue Nasdaq can sustain further gains in the near term. On the other hand, if they falter, that would imply the Nasdaq rally is likely to stall. 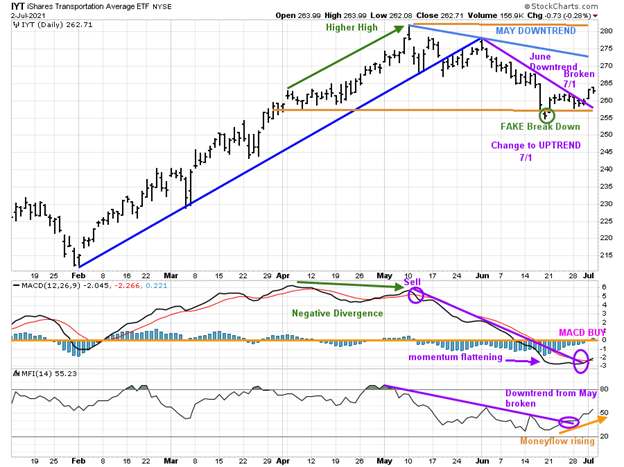 The top chart is the Transportation Average (IYT), which peaked in May. The short-term trend changed to up now that the June downtrend was broken (purple line). However, there is more work to do. IYT has not confirmed the Dow new high, and the downtrend from May remains in effect.

It would be a bullish sign if IYT could begin to outperform the S&P 500 and close above 265.00 and then gain strength to over 275.00, breaking the May downtrend.

On the other hand, a close below 255.46 would be bearish and imply weakness that could accelerate and ultimately lead the broad market lower.

MACD (middle chart) is now on a buy after downside momentum slowed and MACD turned up. If IYT could break the MACD May downtrend, it would be bullish for the near term.

The lower chart is Money Flow (MF). Its positive Money Flow is rising and already broke the May downtrend (purple line), implying investors are shifting assets to Transports despite the weakness in the sector.

As measured by the CBOE Volatility Index (VIX), fear continued to fade among investors and changed to complacency. VIX fell last week to 15.07, its lowest level since 2/20/20 and below its long-term average under 20.00. A close above the 6/18 close of 20.70 would imply an increase in day-to-day fluctuations and a warning a correction could begin.

EEM broke above resistance, on 6/1 a false breakout (pink circle), breaking the uptrend from May (green line). EEM since June had no follow-through in either direction even after breaking the June downtrend. However, EEM closed above 54.50, old resistance, and remains above its rising 50-Day MA at 54.34.

It was disappointing EEM was down -1.3%, closing at 54.78 as EEM appeared ready to rise towards the upper objective of 58.50. Still, now it’s in jeopardy of falling below support as MACD shows signs of momentum weakening.

Support is at 54.20, followed by 52.50. Resistance is 56.00. Further weakness in EEM is likely to carry over into other global markets and no longer be a catalyst to fuel the US market. The lower chart is MACD, a measure of momentum. MACD remains on a sell. MACD missed getting oversold, below 0 to be in a position to generate a new buy. More time is needed to see if MACD turns up or if the momentum continues to weaken.

IWM closed at 229.19, down -1.3%, stalling after showing strength the previous week. It’s not a good sign IWM failed to make a high and closed below old resistance at 230.00. However, there is some hope if IWM can remain above its short-term downtrend from April (purple line). 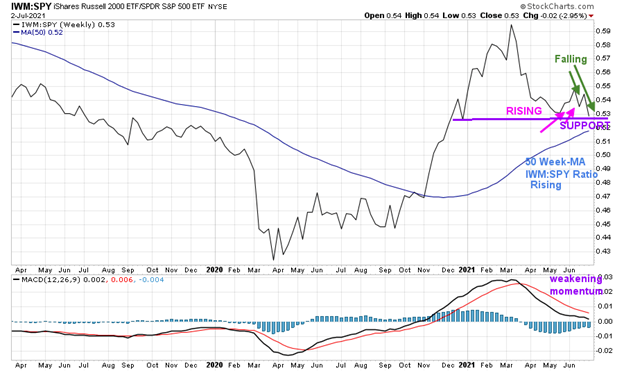 The weekly IWM /SPY ratio is flipping back and forth, now falling but remains above the 50-week moving average (MA), which continues to rise. However, it’s not a positive sign MACD has turned down. 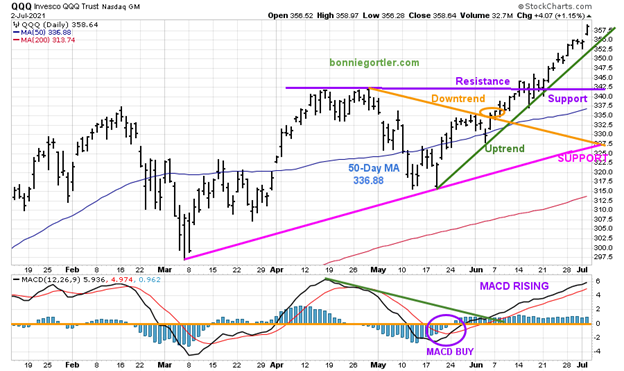 The top part of the chart shows the daily Invesco QQQ, an exchange-traded fund based on the Nasdaq 100 Index with its 50-day moving average and 200-day moving average. QQQ broke its May downtrend (orange circle) on 6/4 and is still in an uptrend.

QQQ gained 2.6% for the week leading the overall market higher. The upside objective remains 370.00. A close below 350.00 would break the uptrend and reduce the odds of reaching 370.00.
Support is at 342.50, followed by 335.00. A close below support at 327.50 would break the uptrend from March and increase the odds the decline will accelerate and test the March lows.

The bottom chart is MACD (12, 26, 9), a measure of momentum. MACD remains on a buy. Be alert if MACD starts to turn down and then generates a sell, implying that the easy money is over and risk increases. 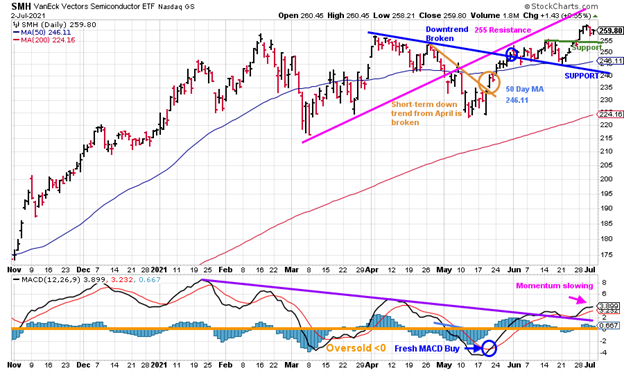 The lower chart is MACD, a measure of momentum. MACD is on a buy holding above the downtrend from January (purple line), turning up last week. MACD made a higher high, confirming the high in SMH. Bulls remain in control. However, watch if MACD momentum continues to slow or gains momentum. 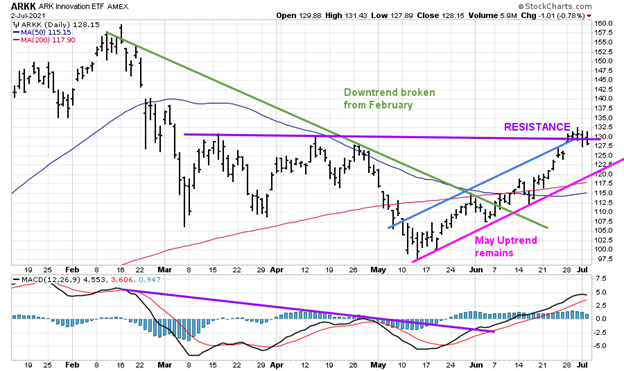 I like to watch the movement of ARKK Innovation (ARKK) to see the risk appetite of traders. ARKK was in a downtrend but shifted in May to an uptrend. ARKK bottomed in May and continues to have a bullish pattern of higher lows and higher highs for now. However, after closing above resistance at 130.00 for two days, ARKK turned down and closed below.

Support is at 120.00. Resistance is at 132.50. Further strength in ARKK will be a clue of traders' risk appetite of growth stocks in the short term.

The trend remains up. However, Russell 2000 (IWM) was down for the week, not participating in the rally, which is somewhat disturbing. Major averages made record highs, but market breadth weakened and bears watching. Earnings season is starting, which is likely to increase volatility in the coming months. I am continuing to give the benefit of the doubt to the bulls for now. However, I’m more concerned this week than last despite the clear uptrend. Momentum patterns are weakening as the market goes to new highs. Few and fewer stocks are participating in the rally. Have an exit plan ready if there is a change in trend, and volatility increases quickly. The key closing numbers to watch for a major trend change are below 207.21 for IWM and below 327.50 for QQQ.