Trading the long side in stocks could prove to be painful in the short to intermediate term as several crucial indicators turned sour simultaneously just as the Fed seems to have leaked that it will start tapering in November, says Joe Duarte of In the Money Options.

Risk is certainly rising in this market, given the macro background where record stock valuations and the general state of the world due to COVID and everything else may have reached a point where even the algos can’t ignore them anymore.  Even more interesting, Implied Volatility (IV) for SPY options is rising rapidly just as the market’s breadth is imploding, suggesting that traders are getting antsy and that a big move is approaching.

Moreover, with the EU cutting back on bond purchases (while assuring everyone that it’s not a taper) even the hint of a similar move from the Fed will put the MELA system (Markets, Economy, Life Decisions, Algos) at risk of decline. In addition, with the stock market being the central cog in the accumulation of wealth for MELA, a stock market crash would likely cascade into a recession and what could be a rapid and immediate reversal of what investors have gotten used to over the last decade.

Of course, no one has ever said the Fed is all that bright, which means that they just might start tapering anyway, which is probably why the options market is suddenly very fidgety.

And how bad could things get? Well according to a recent model a 0.25% increase in the Discount Rate could turn into a 12% or so correction in stocks. With the algos in charge that should take a couple of hours to accomplish.

Of course, it may all be a coincidence, but it’s interesting to see what’s happening in the markets as the biggest proponent of tapering, Dallas Fed Chair Kaplan is suddenly liquidating his stock portfolio, to “avoid perception of conflict of interest” just as the market breaks down. Interestingly, Mr. Kaplan’s holdings include Tesla (TSLA), Google (GOOG), and Apple (AAPL). All of which are heavily weighted stocks in SPX and NDX, two indexes (see below) which got crushed at the end of the day on Friday as the news about his trading decision and the Fed’s alleged plans for tapering in November began to circulate a bit more robustly. 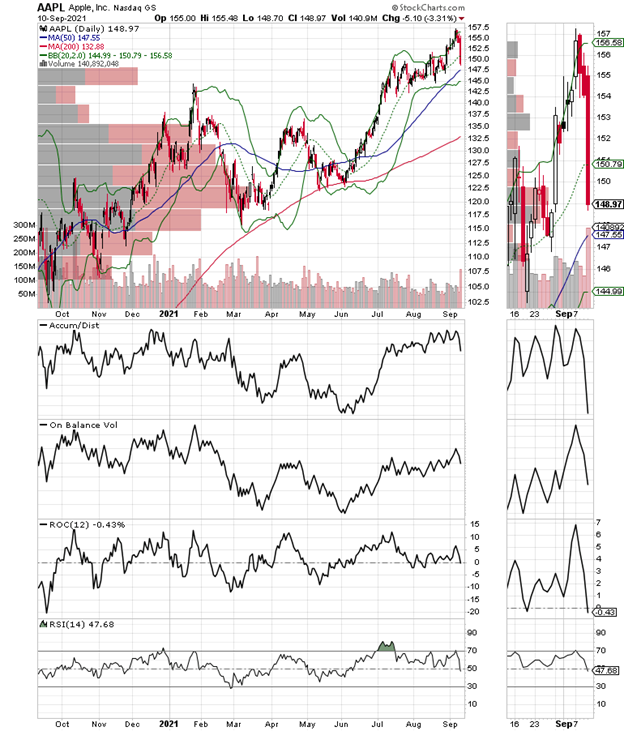 Moreover, note the similarities between the SPX and NDX charts below.

I recently recommended purchasing shares of semiconductor maker Cirrus Logic (CRUS) and the shares have broken out after a long term basing process.

Cirrus is one of those companies that few have heard of but whose products are in two things we all use on a regular basis: smart phones and laptops. And it’s where the two meet that the company is finding what could be a long term sweet spot. Specifically, think of audio, touchpads and energy savings; three areas of technology that are crucial to both ease of use and cost management.

Now, I don’t want to roll into the weeds of high grade chip technology. But who doesn’t want a phone with better energy efficiency, so the battery lasts longer? And who doesn’t want better sound for apps, games, and calls? Moreover, who doesn’t wish that their touchpad is more responsive and less clunky?

Well, those are the three issues where Cirrus has been putting its money and its technology. And it’s paying off. Indeed, the company delivered a 14% year over year revenue increase in its most recent quarter and gave positive guidance.  In addition, management specifically highlighted growth in Android phones and PC laptops, where it expects robust growth via the use of haptic based touchpads, which have been standard in Apple laptops for many years but not on PC laptops.  In other words, as PCs switch from current touchpad technology to haptic technology, Cirrus will be a significant component shipper to HP, Lenovo, Acer and the rest of the PC manufacturers.

And the market is starting to recognize that as the CRUS earnings date approaches, likely in late October or early November.  Indeed, as the stock is flirting with a breakout, Accumulation Distribution (ADI) and On Balance Volume (On Balance Volume) are both documenting steady money inflows into the stock.

A move above the $85 to $90 area could well take the price of this stock significantly higher over the next few months; of course, barring an all-out market meltdown.

I own shares in CRUS as of this writing. 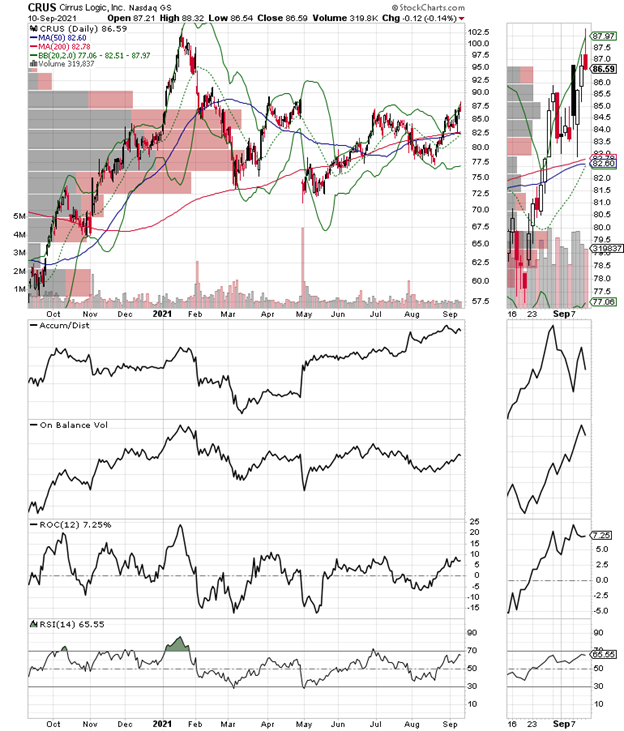 Options traders are trying to have it both ways by remaining cautious and wary of the market while still betting on higher prices. However, this situation is not likely to last as Implied Volatility (IV) is starting to rise which means that some type of meaningful move is setting up.

And if support levels, such as the 50-day moving average for SPX fail to hold, we could see some aggressive selling.

Market Breadth: Worsening by the Minute

The New York Stock Exchange Advance Decline line (NYAD), the most accurate indicator of the stock market’s trend since 2016, made a barely there new high on 9/2/21 which quickly faded on 9/3. Moreover, after treading water for a few days after, NYAD ended the week of 9/10/21 below its 50-day moving average and the 50 points on RSI. 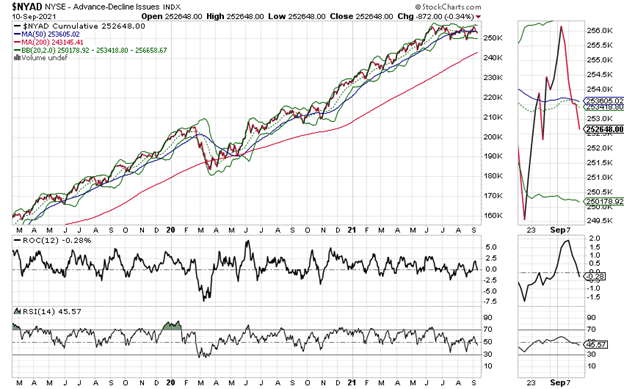 The double fall below the key 50-50 points is technically a sell signal. Of course, we’ve had several of those lately which have been reversed. But you never know when a Duarte 50-50 Sell signal will stick. All we know is that when they do stick, they can be painful. So that means that caution is warranted, especially when viewed in the context of what we’re seeing in the options market. 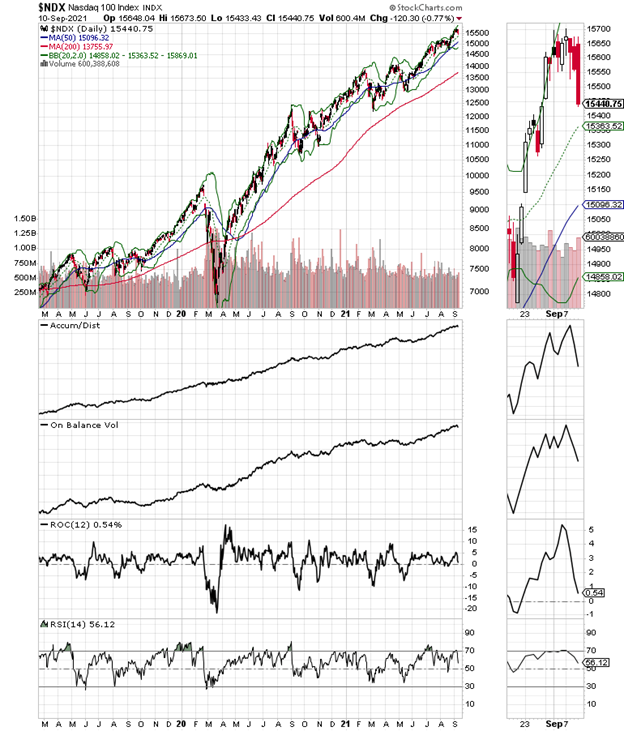 Confirming the sudden weakness in stocks the Nasdaq 100 index (NDX) cut through its 20-day moving average and fell below the 50 area on RSI while Accumulation Distribution (ADI) and On Balance Volume (OBV) both collapsed. 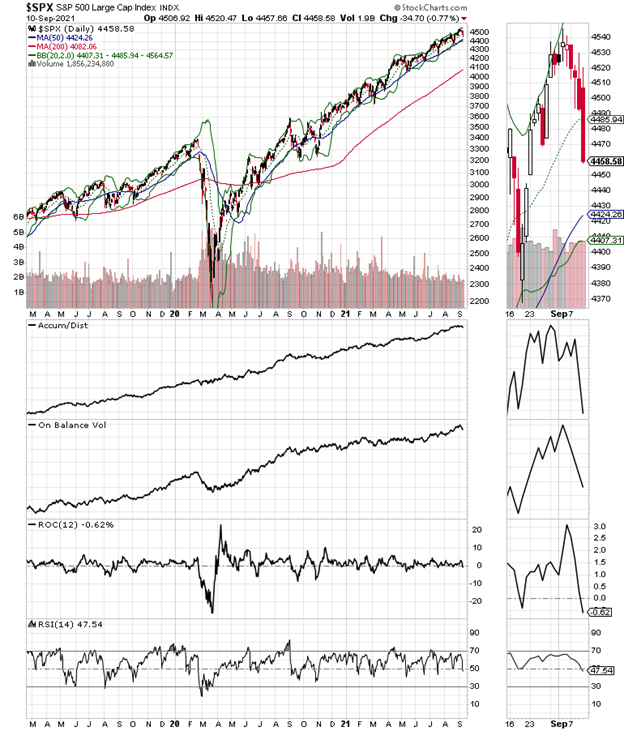 Meanwhile, the S&P 500 (SPX) was nowhere to hide as it mirrored the action in NDX suggesting that next week could be very difficult.