Stocks did not have a big reaction in the wake of the FOMC announcements that:

Other markets saw bigger movements. For example, the US Dollar bullish ETF (UUP) jumped after the dot plot release at 2:30, suggesting that currency markets perceive a hike in the Fed Funds Rate as more likely than before the release.

Another big reaction came from the Treasury Inflation-Protected Securities ETF (TIP), which lost 0.1% compared to a gain of 0.1% in the 7-10 year Treasury note ETF (IEF). The implication is that the Treasury markets are acting as if they expect the Fed to dampen inflation. I view the market’s action today as good news: The Fed still has credibility as an inflation-fighter (evidenced by the decline in TIP and the rise in IEF, but isn’t expected to have to tighten so drastically as to undermine the favorable investment climate (evidenced by stocks holding their gains).

That doesn’t mean that stocks won’t go lower in the weeks ahead, but it probably does rule out a 2018-style correction (a rapid loss of almost 20%). Despite today’s bounce, Monday’s drop of 1.7% in the S&P 500 Index (SPX) brought it further below its 50-day moving average than at any time since last October. (See chart below.) For the past 11 months the 50-day moving average was a reliable bottom-fishing area. Now that is called into question. 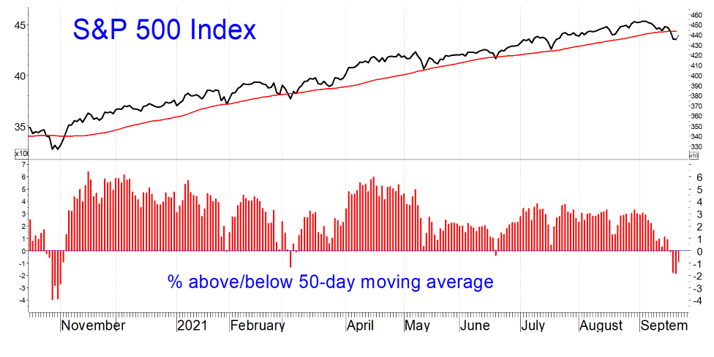 With today’s market advance on strong breadth, I place the odds of a sell signal for our equity model at a bit under 50%. However, I believe that we are now in a sideways market rather than in an uptrend. In the last issue, I recommended three covered-call positions if you wanted to add to equity exposure on a retracement:

All three of these ETFs fell below these levels this week. If you opened any of the covered-call positions I recommended in the last issue, these positions look like they could serve you well. With VIX above 19%, covered-call writing is likely to be preferable to outright long positions in ETFs.

For bond fund investors: The Fed’s adjusted stance (more likely to tighten than it previously appeared) should be good for floating rate bond funds.