The Bulls Are in Control Until Proven Otherwise

The S&P 500 had its best week since July, states Bonnie Gortler of bonniegortler.com.

Five sectors were stronger than SPDR S&P 500 ETF Trust (SPY), up 1.83% the week ending 10/15/21. Materials (XLB) and Real Estate (XLRE) were the strongest sectors, while Health Care (XLV) and Communications (XLC) were the weakest.

It continues to be an encouraging sign for the bulls that the Value Line Arithmetic Average, a mix of approximately 1700 stocks, was strong, gaining 1.80%, and the Dow Jones Transportation Average rose 3.76%. 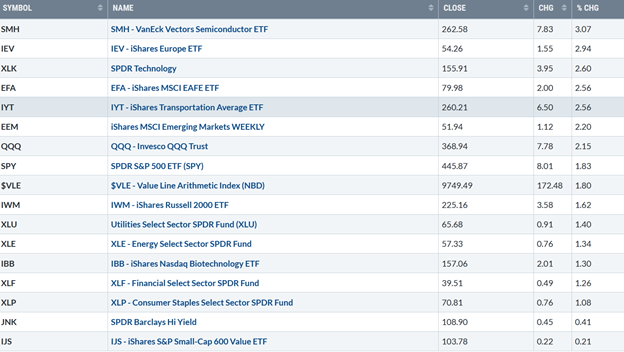 Investors rotated into Semiconductors (SMH) and Europe (IEV), which have been out of favor in recent weeks.

Watching new lows on the New York Stock Exchange is a simple technical tool that helps awareness about the immediate trend's direction. Learn more tips in my book, Journey to Wealth. The market is very strong when the new lows are below 25. When new lows are between 25 and 50, the risk is low, and prices tend to rise.

New lows closed at 30 on October 15, continuing to contract in October, remaining below the August 19 peak (green circle) of 118. It's positive that new lows fell to the 25-50 zone where the risk is low, and prices tend to rise. A significant correction is not likely until new lows rise and close above 150 (blue line). 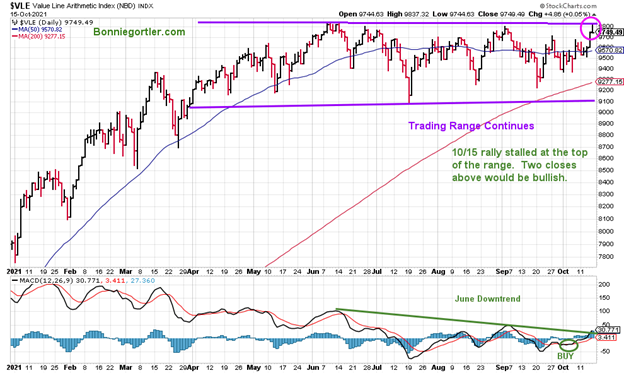 The Value Line Arithmetic Average is a broad index, a mix of approximately 1700 stocks. It remains in a trading range. The direction of the breakout or breakdown will be the clue to the next move. If MACD continues to rise through the June downtrend, then the odds of the breakout will be to the upside which bodes well for the broad market.

It's encouraging the higher low from August (orange arrow) held last week. It will be short-term bullish for the Nasdaq if the June downtrend is broken (black line).

The weekly Advance-Decline Line trend remains in a downtrend and turns up, making a higher low (chart not shown). However, expanding weekly breadth (more issues up than down), which could take several weeks, is needed to confirm an intermediate bottom (weeks-to-months) has occurred. 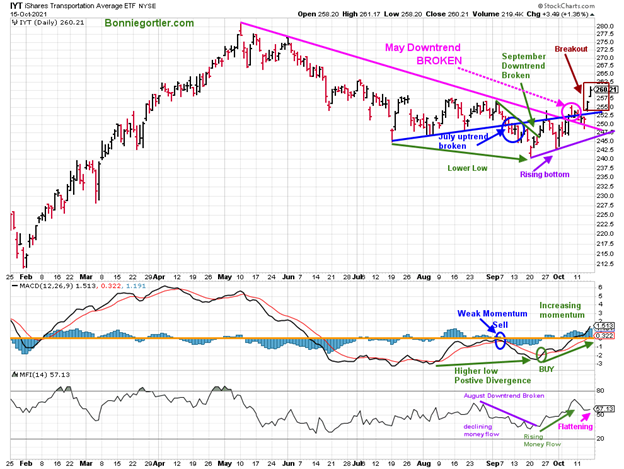 Its bullish IYT was one of the strongest sectors for the last two weeks, up 2.56% after gaining +2.11% the previous week, closing at 260.11. After breaking the short-term September downtrend (green line), the Transports (IYT) broke the May downtrend (pink line), successfully testing its September low.

MACD (middle chart) remains on a timely buy with increasing upside momentum, implying more gains ahead. Short-term resistance is 262.50, followed by 267.50 and 275.00.

Money flow (lower graph) has improved since September fueling the short-term breakout to the upside. However, money flow stopped rising on the breakout of IYT and started flattening. For IYT to get through the first resistance at 262.50, money flow needs to turn up now. 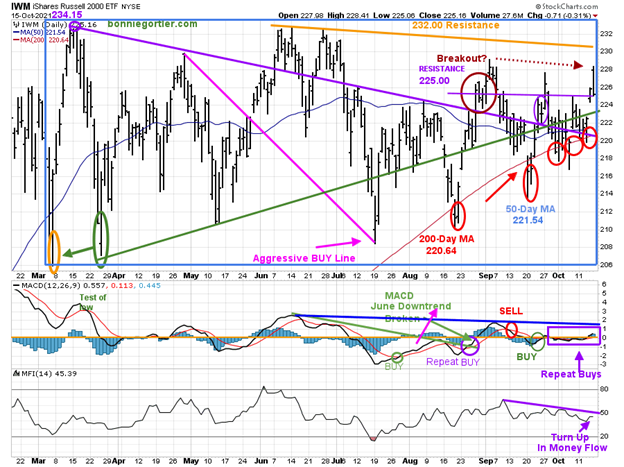 IWM made a low on March 5, then peaked at 234.15 (purple circle), followed by declines to test the March lows and the March high, in a trading range (blue rectangle).

Last week, IWM fell below the 200-day moving average (red circles) and recovered for the fifth time (red circles). The buyers stepped in on October 13, above the lower support of 218.00. IWM made an effort to breakout (brown dotted arrow), but IWM stalled under 232.00 resistance on October 15 and closed near its lows above old resistance at 225.00.

The middle chart is MACD (12, 26, 9), a measure of momentum. After breaking the June downtrend, MACD gave repeat buys in August but no meaningful rally. MACD remains on a buy but has had a succession of repeat buys. What’s different now?

I’m optimistic that MACD and money flow will break their downtrends and IWM will challenge their old new high. Daily support is at 224.00 followed by 218.00.
The weekly chart (chart not shown) key support remains at 210.00.

A weekly close below 210.00 would negate my positive outlook and give lower downside objectives. 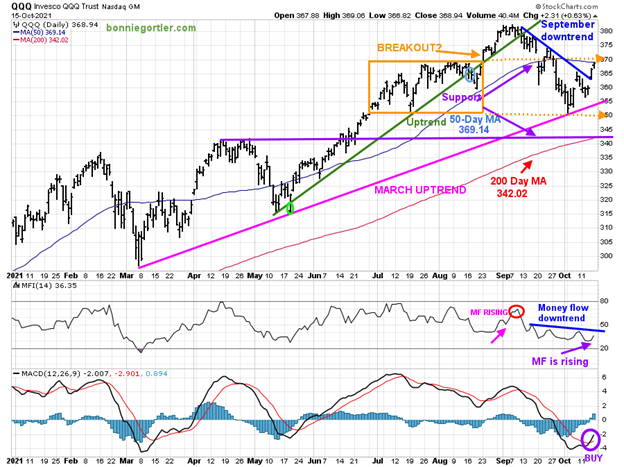 Money flow peaked in mid-September (red circle) and then trended down. Its positive money flow is now rising (purple arrow) and close to breaking the September downtrend (blue line). Money flow rising implies that investors have started rotating into growth stocks. It will help if 10-Year US Treasury Yields stop climbing in the near term and stabilize. 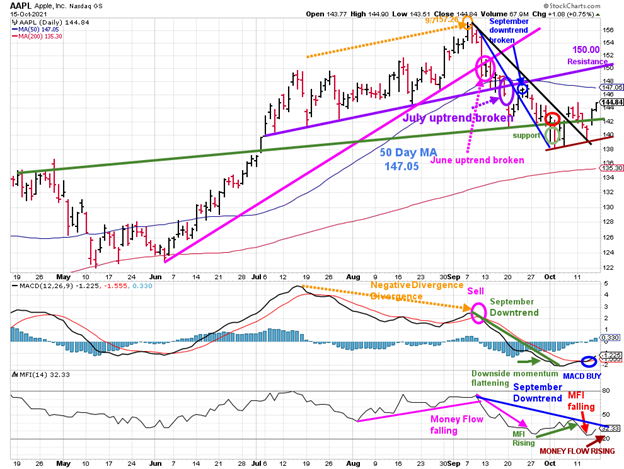 Apple (AAPL) peaked on 9/7/21 at 157.26 (orange circle). AAPL then declined to fall below its June uptrend (pink circle) and below its 50-day moving average in September, where it remains in October. AAPL broke its short-term September downtrend (blue line). However, it failed to close above the 50-day moving average or above the July uptrend (purple line) and continued lower.

AAPL continues its better tape action gaining 1.36%, closing at 144.84 near its high of the week, above support at 141.00, and above the September downtrend (black line).

MACD (middle chart) generated a new buy (blue circle) on the rising money flow lower chart. I am optimistic that the September downtrend in money flow will continue to rise ahead of earnings announced on 10/28/21. 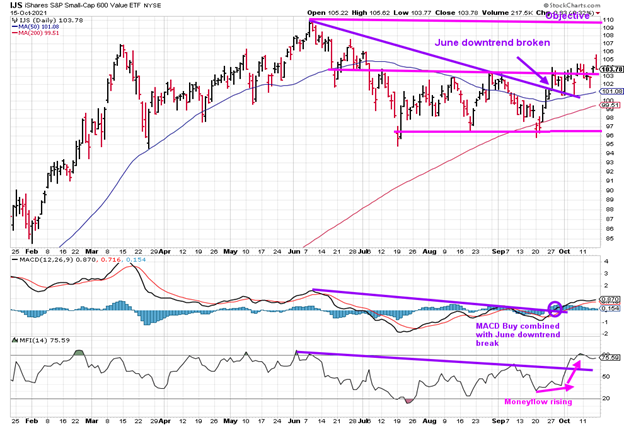 The iShares S&P Small-Cap 600 Value ETF (IJS) tracks an index of small-cap US stocks that provides exposure to the US small-cap companies that are considered undervalued by the market relative to other companies. The top sectors are Financials, Consumer Cyclicals, and Industrials.

IJS only rose +0.21%, remaining above the June downtrend and the mid-channel. MACD is on a buy, gaining momentum after breaking the June downtrend. Money flow remains strong, although it has flattened. I remain confident IJS will continue to rise toward their June highs.

Watch Semiconductors for Leadership to Ignite the Broad Market Higher 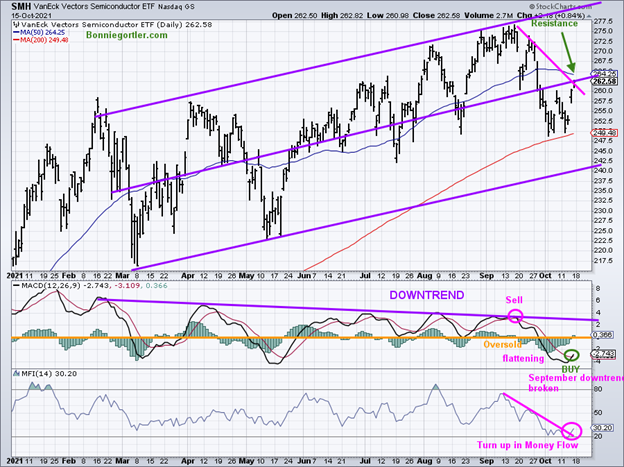 SMH is a leading indicator of the technology sector. For a sustainable rally, Semiconductors need to: 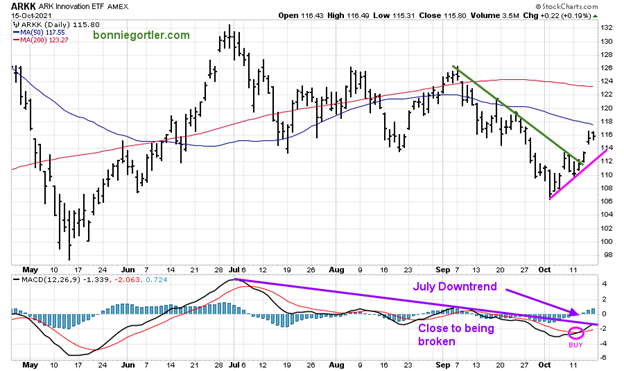 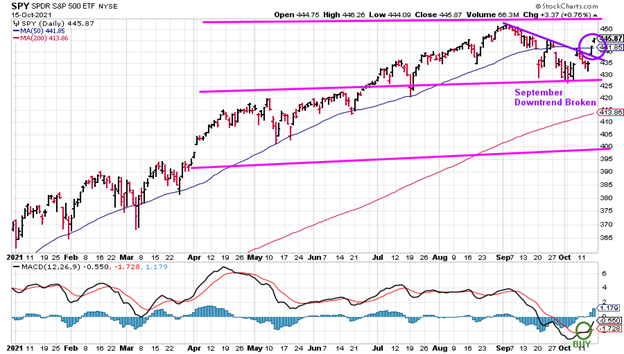 The S&P 500, with approximately 500 large companies, also has broken the September downtrend and generated a new MACD buy.

The bulls won the battle over the bears last week. The short-term trend is now up. Momentum indicators such as MACD have improved over the previous few weeks and have generated new buy signals. Many downtrends were penetrated in price last week. Watch for further confirmation with strength from AAPL, ARKK, Semiconductors Value Line Arithmetic Average, and the Russell 2000 to be the catalysts that propel the market higher as we enter November and December, a historical seasonally strong time of the year. The bulls are in control until proven otherwise.
Remember to manage your risk, and your wealth will grow.