Taper Almost Certain to Start in November. Jury Is Still Out on Stocks

I’ve been expecting a rally in stocks, so I’m not surprised at last week’s bounce. What worries me is what’s next, says Joe Duarte of In the Money Options.

Certainly, last week’s rally was a welcome change from the market over the prior few weeks. But by Friday, it had the feel of an options-related, algo-fueled operation designed to trap as many traders as possible.

Of course, the rally could well continue in the short term. But what was of concern, as I describe below, was the market’s late-Friday fade, as measured by breadth and the sudden weakness in small stocks. This had led the way for the prior few days.

Still, given the huge wall of worry that had built up, it wasn’t a total surprise when stocks rallied soon after the release of the most recent of the Fed’s FOMC minutes showing the central bank’s intention to reduce bond purchases at the rate of $15 billion per month starting in November, unless there is a significant shock to the economy.

That said, we’ll have to see what happens next.

I’m not sure about what’s going to happen over the next few weeks, especially now that the market has worked off its oversold conditions and traders could once again start worrying about the Fed.

Moreover, stock prices moved higher just as bond yields fell on the news suggesting that traders are betting that the taper is likely to be a mistake, and that the Fed will likely be forced to revive QE sooner rather than later. Now, if you ask me, that’s a lot of forward thinking. But then again, I’m just an old fashioned stock trader, not a brilliant quant with a PhD in quantum physics who programs algos. Whatever!

So even if your head is spinning from all this stuff, from a trading standpoint you have to trade the trend, which in the short term seems to have turned up. But if there is any point in using history as a guide, you should keep this notion in mind: the effect of tapering is not fully predictable yet. And, because algos are involved, today’s rally could easily turn into tomorrow’s crash in a heartbeat.

All of which means that although we trade what we see and remain long many stocks at the moment, our trading tenets still apply. And here is the list:

There are still some stocks and option strategies which may yield sizeable gains when properly managed even in negative markets.

The Growth Has Just Begun - Loving the AppLovin Vibe

I recently recommended shares of app platform AppLovin (APP) and the stock continues on a nice move up ahead of its Q3 earnings. 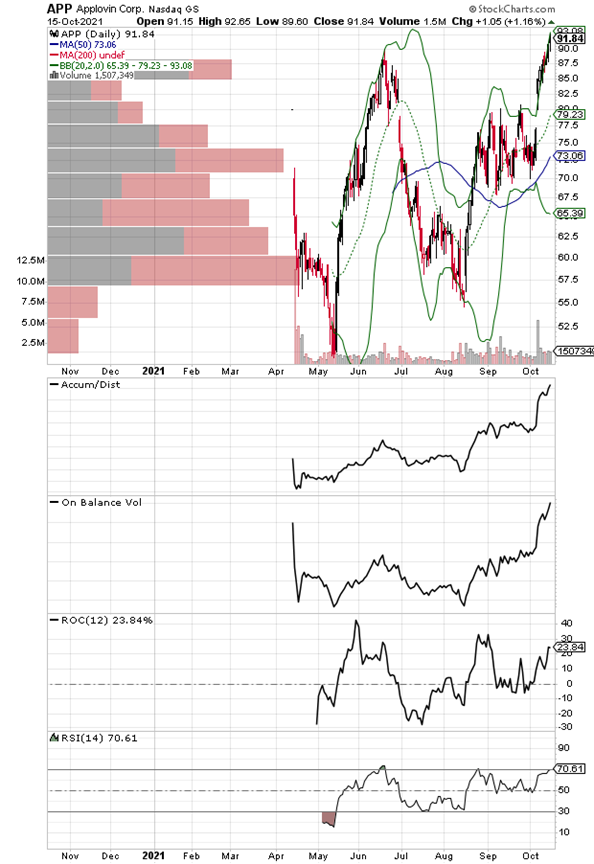 This rapidly growing company, which went public in April 2021, owns a software and app platform that bridges the gap between design and monetization for developers. As a result, it’s caught on and has delivered outrageous growth rates. First it grew based on mobile gaming apps. But of late it’s begun to expand beyond gaming to other areas, such as dieting, via its software platform which has higher margins.

But what makes it most interesting is that, based on comments from management, the growth has just begun. So, although the company may not deliver 80-100% growth rates—as it recently has—forever, management re-affirmed expectations for its 2021 guidance without hesitation. If they’re right that would mean between $2.65 billion to $2.70 billion in revenues and adjusted EBITDA between $680 million to $700 million.

Even more importantly, management sees “several opportunities for added growth over the next several quarters,” in both its software and apps businesses. Specifically, most of the growth is expected to come from leveraging the data obtained by the gaming apps, and others, and selling it to advertisers.

Technically, the stock looks set to challenge the $90 area with excellent momentum. A bit of a consolidation at $90 or so wouldn’t be a bad thing. In fact, it would likely give the stock a bit of a breather from which it could move higher, especially if earnings are above expectations.

Accumulation/Distribution indicator (ADI) and On Balance Volume (OBV) are both in great shape and the stock is where we like it, trading well above its 50-day moving average.

I own shares in APP as of this writing.

Call buyers came back on 10/7/21 as SPX crossed back above 4400 but by 10/8/21 options traders continued to straddle the fence, literally. Specifically, I’m describing a type of options trade known as a straddle, in which a call option and a put option on the same stock are bought simultaneously.

What we’ve been seeing over the last few weeks has been just that – options traders hedging against a market crash by buying puts just below key support levels and buying call options above key resistance levels. The current range seems to be between 435 and 440 on SPY.

The problem is that for every call or put option bought, the market makers are doing the opposite and hedging by buying stocks to hedge their call sales and selling stock to hedge their put sales. The net effect is a whole lot of volatility, and a market that mostly goes nowhere because every option trade is essentially neutralized.

In other words, as long as this continues it’s going to be hard for this market to break down or break out.

The stock market’s breadth continues to play cat and mouse with the resistance level that’s been in place since late May. And what that means is that the New York Stock Advance Decline line (NYAD), which has yet to make a new high in the last several weeks, teased traders on 10/15/21 by spending much of the day above its recent upper-trading range. But unfortunately, it was not to be, and NYAD once again closed without delivering the elusive new high. 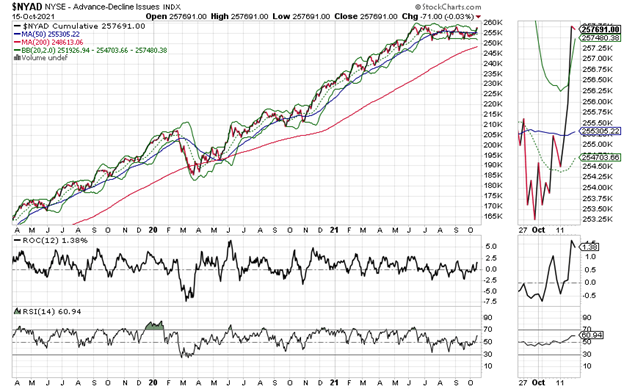 That means that NYAD has now failed to break out four times in the past four and one half months. Moreover, it sets up the potential for yet another trip toward the lower end of the trading range, which could be painful.

On the somewhat bright side, however, NYAD closed just below its 50-day moving average for the week while RSI also moved back above 50, cancelling out the recent sell signal.

Still, it was good to see the market’s breadth improve. Moreover, now we will see if it can last. 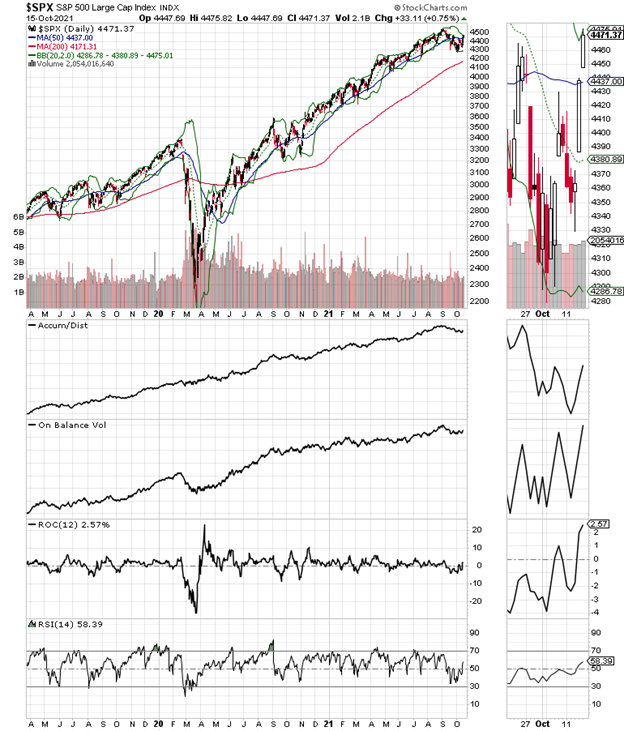 The S&P 500 (SPX) did find support around 4300 after delivering a moderately oversold level on RSI in early October. But the index remains slightly in sell signal territory, below its 50-day moving average and the 50 level on RSI. 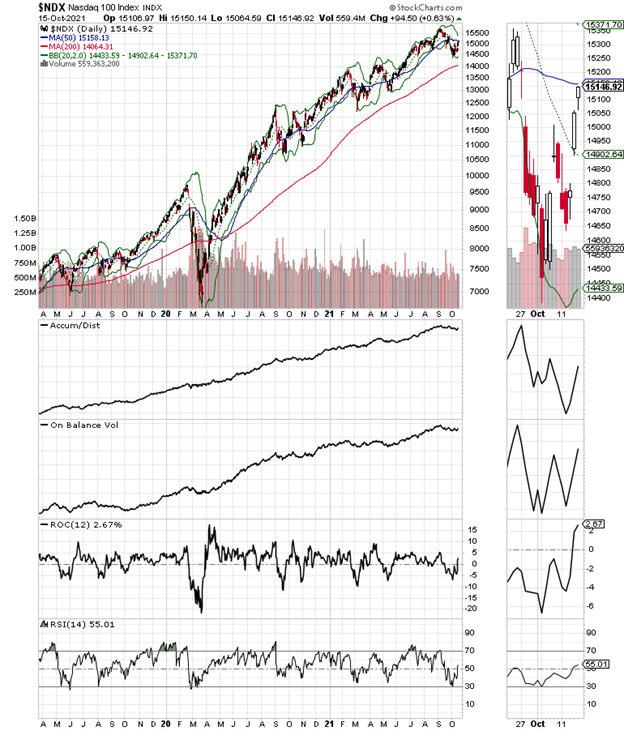 The Nasdaq 100 Index (NDX) is also struggling as it remained below its 20-day and it’s 50-day moving averages although it also reversed an oversold RSI near 30. 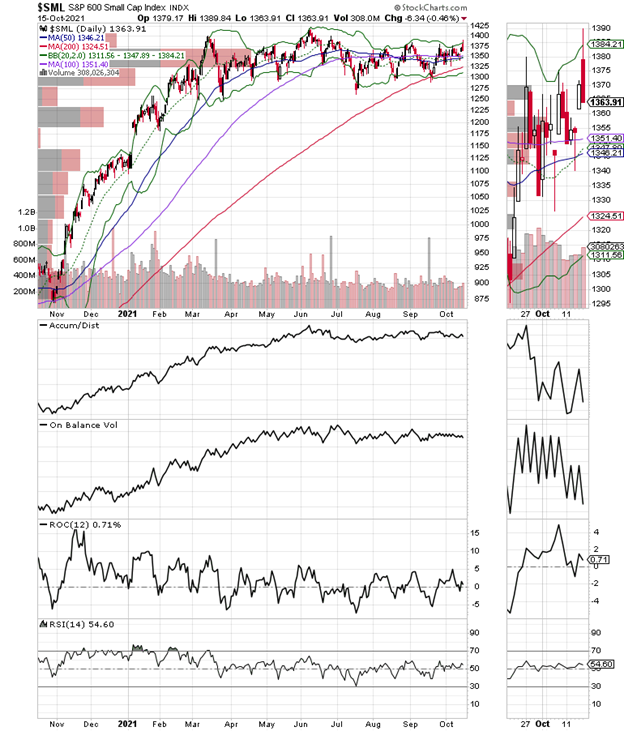 Meanwhile the S&P Small Cap 600 Index (SML) is showing some relative strength compared to the large cap indices. This suggests that the odds of successful trades are more likely in the small stocks at the moment.