Market Breadth Is Improving and the Rally Is Broadening

Four sectors were stronger than SPDR S&P 500 ETF Trust (SPY), which gained +2.02% the week ending 11/05/21. Consumer Discretionary (XLY) and Technology (XLK) were the strongest sectors, while Financials (XLF) and Health Care (XLV) were the weakest.

The Value Line Arithmetic Average, a mix of approximately 1700 stocks, rose +3.79%, penetrating the upper channel. The transportation average surged +5.89%, the fourth straight week of gains outperforming both the S&P 500 and Nasdaq.

Weekly market breadth was solid for both the NYSE and Nasdaq. The New York Stock Exchange Index (NYSE) had 2490 advances and 1021 declines. Nasdaq had 3495 advances and 1458 declines. Weekly new highs were impressive, 549 for the NYSE, and 780 for Nasdaq.

The S&P 500 (SPX) index has been up 16 of the past 18 days. Based on CNN Fear and Greed Index (a contrary indicator), market sentiment rose 10 points for the week, from 72 to 82, rising from 27 one month ago to extreme greed. Now is not the time to be complacent. Buyer beware.

New lows contracted last week, closing at 24 (purple circle), now in the lowest-risk zone where prices tend to rise. A significant correction is not likely until new lows rise and close above 150 (blue line). 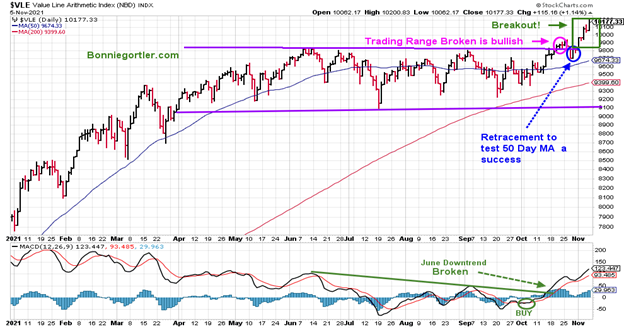 The Value Line Arithmetic Average is a broad index, a mix of approximately 1700 stocks. The Value Line Arithmetic Average had two closes above the trading range, confirming the breakout (pink circle), then there was no follow through to the upside. It turned down for three days, retracing to test the 50-day moving average, and last week reversed sharply higher, confirming the breakout.

MACD (lower chart) broke the June downtrend, then turned up, and last week closed at its highest level since June, confirming the breakout.

Nasdaq new highs hit a peak reading of 708 on 2/8 (purple circle), and then trended lower from February through July. New highs have increased since October. On 11/5, the Nasdaq had the highest number of new highs since May 10, closing at 445. It will be favorable if new highs expand over the next few weeks.

On the other hand, if new highs contract sharply, with more new lows than new highs, the rally may quickly come to an end.

The daily Nasdaq advance-decline line failed to get through the June downtrend (purple line) and turned down in September, making lower highs. The Nasdaq AD line made a higher low in October, holding above the August lows (orange arrow), and turned up. The first week of November, the AD line has risen sharply and closed at its highest level since 9/2. Further strength would be favorable.

Market breadth has improved since the low was made, and turned up breaking the February downtrend, a positive sign. Continued expanding weekly breadth (more issues up than down) is favorable.

It remains to be seen if there is enough strength to penetrate resistance. If breadth weakens and takes out the August low, expect a correction. 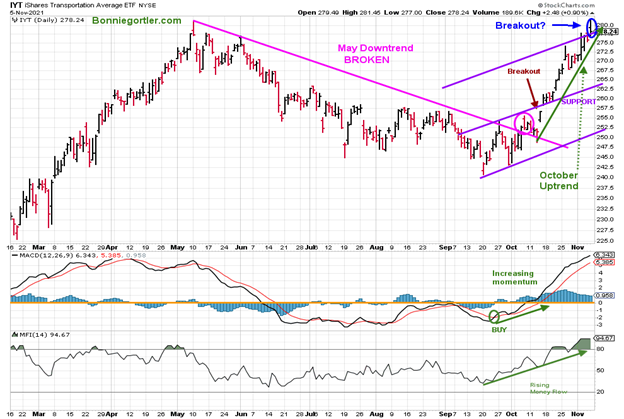 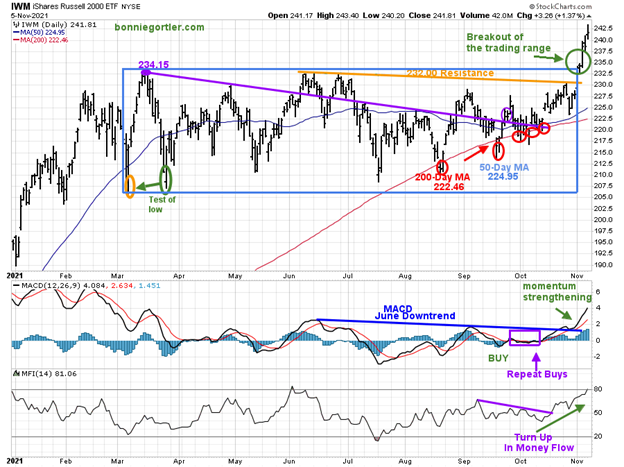 IWM made a low on 3/5, then peaked at 234.15 (purple circle), followed by declines to test the March lows and the March high. There were five penetrations of the 200-day MA (red circles) within the trading range (blue rectangle). However, none triggered major selling.

A week to remember for small caps. The bulls took control last week. MACD and Money Flow (lower chart) made new highs as IWM penetrated 232.00 resistance and then broke out of its trading range, closing at 241.81 up +6.03%.

A rising line means the IWM is stronger, and if falling, the SPY is stronger. IWM has turned up and is now leading in relative strength.

If IWM outperforms the S&P 500 (SPY) and gets through resistance this week, the odds favor IWM will outperform the S&P 500 in the near term. IWM/SPY ratio on the weekly chart has already penetrated their October high (chart not shown). In turn, I expect further strength in IWM compared to SPY in the coming weeks to months. 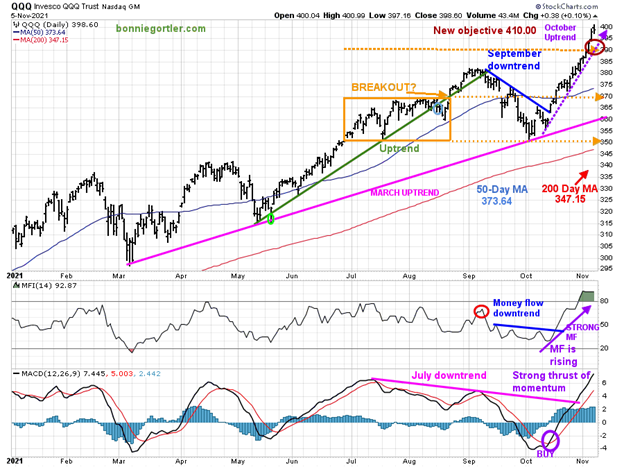 The chart shows the daily Invesco QQQ, (QQQ) an exchange-traded fund based on the Nasdaq 100 Index with its 50-day moving average and 200-day moving average. In June, QQQ was in a trading range (orange rectangle), and then broke out above 370.00 in August, which failed. A decline followed to 350.00 support in late September.

The lower chart is MACD (12, 26, 9), a measure of momentum. MACD gave a timely buy signal. Its bullish MACD is rising with a strong thrust of momentum after breaking the July downtrend. 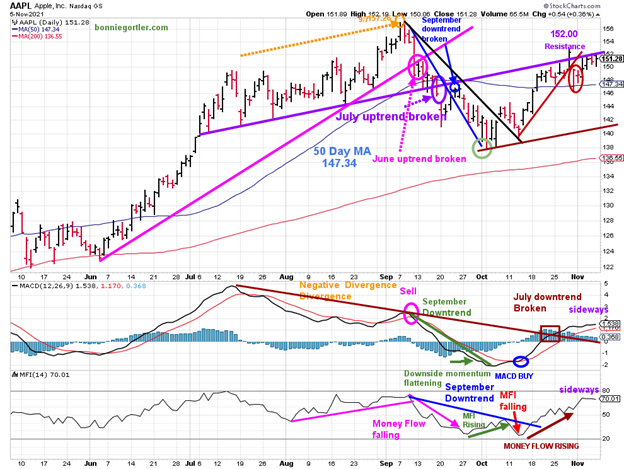 Apple (AAPL) peaked on 9/7/21 at 157.26 (orange circle). AAPL then declined to fall below its June uptrend (pink circle), and below its 50-day moving average in September (purple circle), before bottoming in October (green circle).

AAPL had a quiet week, up 1.14%, and remains above its 50-day MA. After two weeks of low volatility, no big gain or loss like other stocks I watch, and a potential short-term cycle bottom, I am looking for a big move in AAPL this week. A close above resistance at 152.00 will excite the bulls towards 157.00 and above.

MACD (middle chart) remains on a buy (blue circle). Momentum has waned after breaking the July downtrend. Money Flow (lower chart) was rising (brown arrow) and also moving sideways. A turn up in either indicator would be positive. On the other hand, a turndown would be negative. 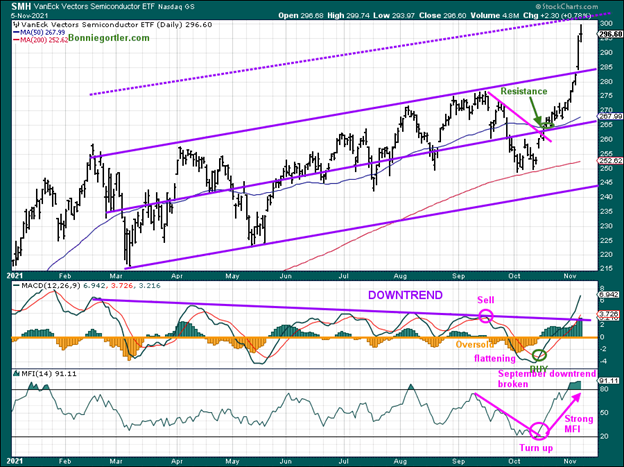 Semiconductors explode to the upside after meeting all our expectations in the last two weeks. SMH is a leading indicator of the technology sector.

This week it would be bullish if SMH continues to lead, making a new high confirmed by MACD, breaking the February downtrend (purple line). 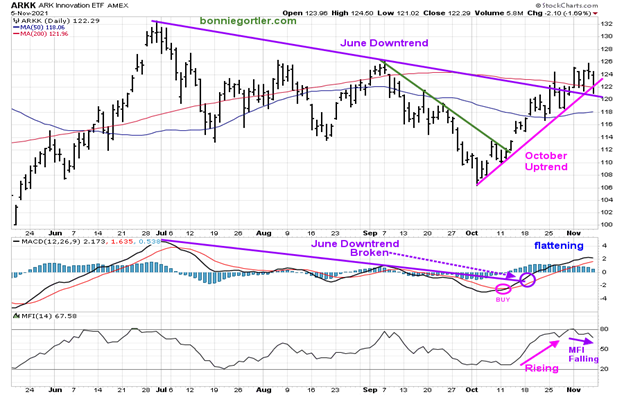 MACD is on a buy and is now flattening. Money flow (lower chart) is rising, suggesting a breakout to the upside is still possible. Unless money flow turns down and ARKK closes below 114.00, give the bulls the benefit of the doubt.

The Dow, S&P 500, and Nasdaq closed at record highs and in a solid uptrend. All three indexes rose for the fourth week in a row. Market breadth is improving, and the rally is broadening. There are no signs of investors rotating out of Technology at this time. Stocks are extended, but with Semiconductors and the Russell 2000 leading the way, the odds favor the bulls. A slowdown or consolidation may be needed in the short term to alleviate some of the optimism before more gains. Be alert; euphoria is in the air. Market sentiment has shifted in one month from pessimism to optimism. For now, enjoy the rally, but prepare your plan to protect your gains.