The broad sell-off in the major averages continues, states Bonnie Gortler of bonniegortler.com.

Nine of the eleven sectors fell, with four sectors falling less than the SPDR S&P 500 ETF Trust (SPY) down -1.21%. Utilities (XLU) and Real Estate (XLRE) were the strongest sectors, while Consumer Discretionary (XLY) and Consumer Services Sector (XLC) were the weakest for the second week in a row.

Weekly market breadth deteriorated again on both the NYSE and Nasdaq. The New York Stock Exchange Index (NYA) had 1070 advances and 2482 declines. Nasdaq had 1104 advances and 3944 declines.

Learn more in my book, Journey to Wealth. Here is an excerpt, "If the new lows are above 50, it is an alert or warning of possible market weakness or a change in market tone. Be aware, it’s a good idea to make sure you are happy and comfortable with your portfolio. It is best not to have more volatile investments than you can handle where you feel uncomfortable. If the selling continues, you could have some serious losses occurring if the market falls further. When new lows are above 150, the market is negative, higher risk, selling is taking place. Sometimes it could be severe, and sometimes on a very nasty day, you can have 'panic selling,' and big wild swings (high volatility) to the downside may occur."

Last week, new lows expanded above the 11/26 peak, its highest level in March (brown circle), and made a new peak for the year on 11/30 of 280. New lows were less to finish the week closing at 202 (pink circle), but they remain above 150 (blue line), in the high-risk zone. Until new lows contract and get below 50 for at least two days, expect high day-to-day volatility and a bumpy road ahead.

The daily Nasdaq AD-Line failed to get through the June downtrend (purple line) and turned down in September, making lower highs. The Nasdaq AD-Line made a higher low in October, holding above the August lows (orange arrow), and turned up.

The first week of November, the AD-Line rose sharply to its highest level since 9/2 (pink circle), stalled at resistance and turned down, breaking the October uptrend (blue dotted line), an advanced warning a decline was forthcoming.

The August uptrend was broken and continues to make new lows, lower than last week (brown circle), and now at its lowest level of the year (blue circle) with no bottom in sight. Technical damage has occurred in the AD-Line, and more time is needed for a favorable pattern to develop. 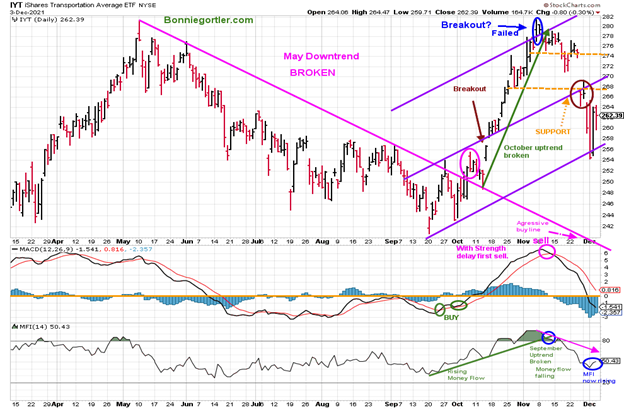 The Transports (IYT) rose in October, but came under some selling pressure in November after breaking the October uptrend and meeting its upside objective.

MACD (middle chart) remains on a sell. However, since MACD confirmed the high made in IYT, I’m expecting another rally which may be underway. MACD is now oversold, below 0. It would be positive if MACD turns up and generates a buy.

It’s a positive sign money flow (lower chart) has already turned up. Continue to watch the money flow if it weakens or starts rising again. If money flow weakens and IYT goes below the low at 256.20, IYT could fall to 238.00, an aggressive buy for those of you who may be bottom fishing. 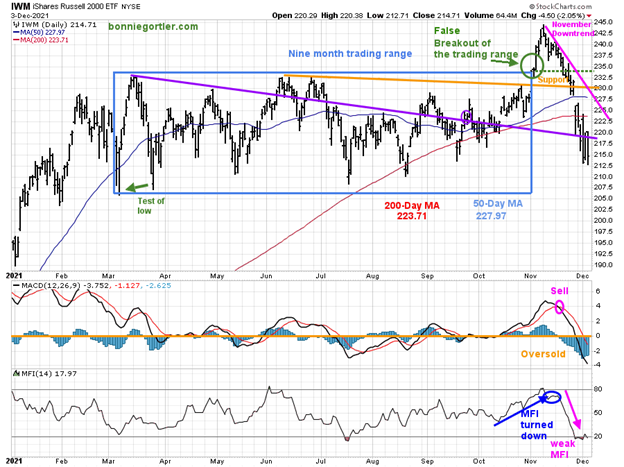 A false breakout occurred in IWM after being in a nine-month trading range. For the fourth week in a row, IWM fell -3.65% to 214.71. IWM closed near its lows for the week and below its 50-day and 200-day moving average.

MACD (middle chart) remains on a sell. MACD made a higher high, confirming the high in IWM. Therefore, most times, the first decline can be bypassed. However, I did not expect the IWM to fall 14.3% after a MACD confirmation and IWM breaking out of its trading range. MACD is now oversold, but MACD is declining, and no favorable bottom formation yet. Therefore, a safer buying opportunity is likely over the next 3-6 weeks.

Money flow (lower chart) remains weak and is falling. Watch MFI for a turn-up, a clue to know that investors are stepping into small caps.

Be patient for a bottoming formation to develop, and IWM holds above 210.00 support for a sign that IWM will stop falling and begin to consolidate. 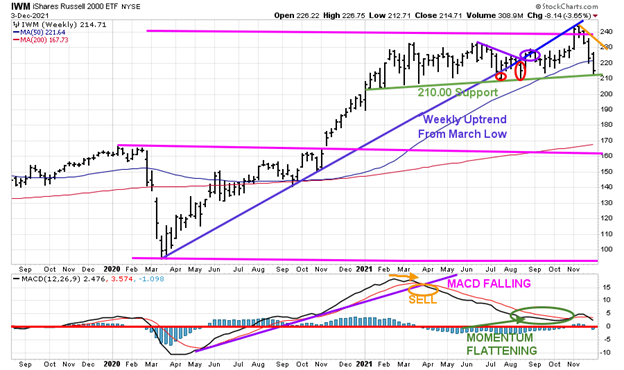 The Russell 2000 (top chart) closed below the March uptrend (blue line) in August. A consolidation began, followed by new highs that stalled at the trend line in November.

MACD (lower chart) is on a sell, falling, not yet oversold, and below 0 (red horizontal line), showing weak momentum. Be patient and wait until a safer pattern develops. 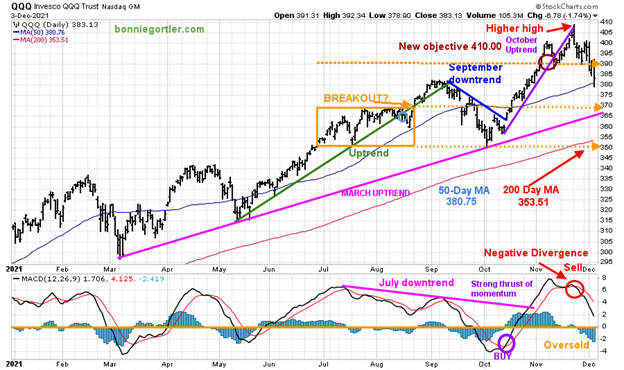 The chart shows the daily Invesco QQQ, an exchange-traded fund based on the Nasdaq 100 Index with its 50-day moving average and 200-day moving average. In June, QQQ was in a trading range (orange rectangle) and then broke out above 370.00 in August, which failed. A decline followed to 350.00 support in late September. After breaking the short-term downtrend from 10/7 (blue line), QQQ continued to climb in November, and QQQ came close to its upside target of 410.00 on 11/22 with a high of 408.71 before reversing lower.

QQQ closed at 393.13, down -2.06%, hitting its second support of 380.00 on Friday despite Apple, its largest holding, closing higher for the week. Weakness in AAPL would be short-term negative, likely putting downside pressure on QQQ.

The March uptrend (top chart) remains intact (pink line) and would be broken with a close below 365.00. A close below 365.00 would shift the trend to down, make it harder to make money, and likely fuel more selling in Nasdaq.

MACD made a new high, strong thrust of momentum after breaking the July downtrend. In the Market Update 11/19/21, I alerted you that the first MACD sell is likely not to be a serious correction. “A period of consolidation may be necessary. The second sell when and if it occurs should be followed. With the rise in QQQ, MACD moved sideways and did not give a sell. However, a potential negative divergence has formed where QQQ made a higher high and MACD a lower high. Therefore, if MACD does not make a higher high, take the next MACD sell when given”.

A MACD sell did occur, and it was a timely exit so far. However, MACD is not below 0, in an oversold condition. Money flow is falling (chart not shown), so continue to be patient and wait for a safer entry.

The short-term action in Apple (AAPL) will continue to be a clue when and if QQQ will reverse higher. The hourly chart is now in a downtrend with MACD on a sell, oversold below 0 but falling. Hourly money flow is in a downtrend but is rising, which is positive. A close above 165.00 would confirm a short-term rally is likely.

Semiconductors had a great run in October, leading the technology sector higher. However, the easy money is over. The October uptrend is broken (blue line).

MACD (middle chart) is on a sell after very strong momentum. Look for MACD to decline over the next week or two and not likely to reset, to go below 0.

There would be less risk if MACD falls below 0 and then gives a buy signal. However, I recommend caution until Money Flow turns up and breaks the downtrend with the trend turning down.

What to Watch for Short-Term Direction This Week

In the top portion of the chart (Figure:11), The NYSE AD-line made a new high on 11/8/21; but since then, it has fallen, and it’s negative. The September uptrend is no longer in effect. As a result, it’s harder to make money with market breadth negative, and stock selection is important. However, it could take a few weeks for a favorable pattern to develop. In the meantime, the lows made in July, August, and September are essential to hold (blue circles) over the next several weeks, or more severe correction is likely. 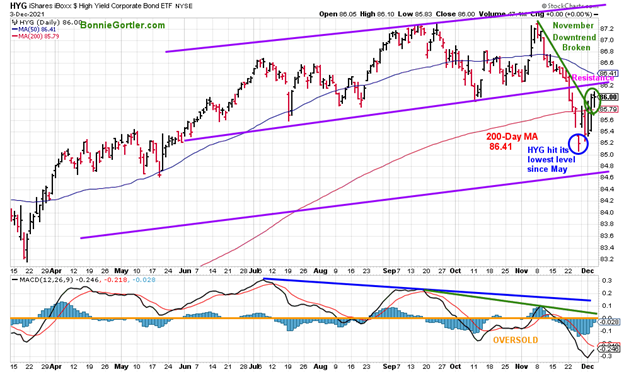 After peaking on 11/8/21, High-Yield Bonds (HYG) have been under pressure, falling to their lowest level since May (blue circle). HYG rose last week, holding above support at 85.00, breaking its November downtrend (green line), a positive sign. Resistance is at 86.60. MACD (bottom chart) is oversold and close to generating a buy.

It would be negative in the near term if HYG turns down now and makes a new low. On the other hand, it would be favorable if HYG rises and gets through resistance and closes above its 50-day and 200-day moving average. 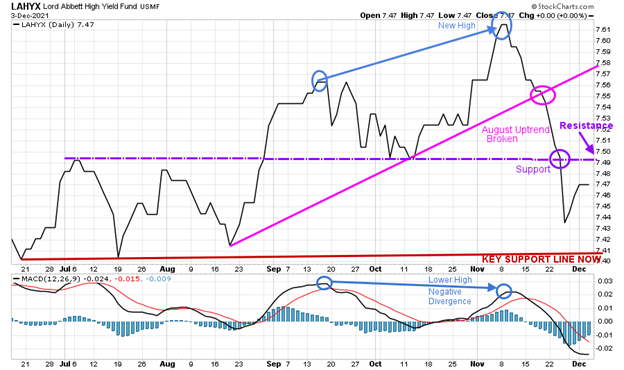 Lord Abbett High Yield (LAHYX), an open-end mutual fund, broke its August uptrend, closed below support, and closed remains below the August lows. The next key support area (red line) is the June lows. A close below 7.40 would be concerning.

Monitor the action in HYG and LAHYX. If they rise together, and get through resistance this week, it’s a clue if US equities will stabilize and attempt to rally.

Market sentiment is improving. CNN Fear and Greed Index (a contrary indicator) has reversed course, shifting from extreme greed a month ago at 82 to close at 20, extreme fear.

Daily moves in the averages are increasing; for example, the S&P 500 closed up or down at least 1% every day last week.  A sign that the major averages will be less volatile is if $VIX begins to decline and closes under 23.00. On the other hand, an increase in $VIX implies the decline will accelerate, and day-to-day volatility will increase with potential swings of 2% or more.

Tape action is negative, with market breadth deteriorating with increasing new lows on the NYSE and Nasdaq. Investors sold growth and small-cap stocks aggressively, primarily stocks down in 2021 for tax selling. Day-to-day volatility has increased. Margin calls helped accelerate the decline. Many short-term momentum and volume indicators are stretched to the downside created by the recent sell-off and are in the position where tradeable rallies occur. Fear is mounting, creating potential buying opportunities. December is historically a positive month and usually not a time to be aggressively bearish. Be alert for a near-term recovery if market breadth begins to improve, the major averages stabilize and turn up, small caps hold support at 210.00, downtrends shift into uptrends, and the bulls come out of hiding.