Bears Put Up a Roadblock

Stocks rallied enough in the morning to allow us to sell our short-term leveraged Nasdaq 100 (NDX) trade for a nice profit after three days, notes Jon Markman, editor of Strategic Advantage.

In our biweekly deep dive, we offer a close-up view of uranium miner Cameco (CCJ) and the changing role of nuclear power as a green choice in the new world order.

Stocks jumped all over the map on Monday, yet by the closing bell, each of the major averages was lower. The S&P 500 (SPX) finished at 4,119, a loss of 0.3%. While the close was well off the session low at 4,096, during the day there was no real progress toward overhead resistance at 4,175. This is an important inflection point. Bulls were turned back in late May and early July on a kickback rally to 4,175. Six days after the latter, the benchmark index tumbled all the way down to 3,867. 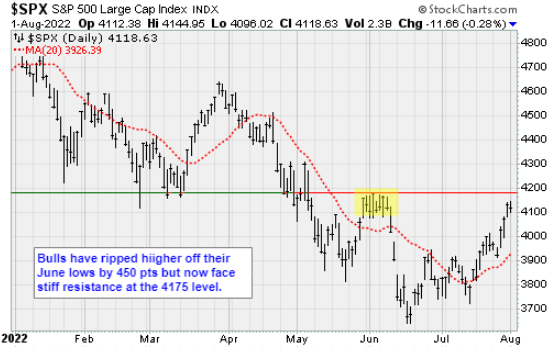 I do not believe that level is in play. Sentiment is improving and bulls have been buying the recent declines. Also, there is good support for the S&P 500 at 3,960, its 20-day moving average. On the other hand, some light backing and filling to consolidate gains would refresh bulls and help them to make a successful run at the 4,175 resistance level. I will continue to look for opportunities to recommend buying pullbacks.

Leverage: Our ProShares Ultra QQQ (QLD) position closed Monday at a $52.20 stop for a 6.6% gain. It was purchased on July 28 at $49.64. I expect to recommend a similar position on the next pullback.

Consumer staples (XLP) and Consumer Discretionary (XLY) led the gainers, while the energy sector was the steepest decliner. Breadth favored decliners four-three, and there were 136 new lows vs 90 new highs. The leaders were PepsiCo (PEP), Keurig Dr. Pepper (KDP), McKesson Corporation (MCK), and Enphase Energy (ENPH). Now we’re getting somewhere. PEP is a genuine leader that should break out here if bulls are in charge

The Institute for Supply Management's manufacturing index fell to 52.8 in July from 53 in June, compared with expectations for a steeper decline to 52 in a survey compiled by Bloomberg. "The US manufacturing sector continues expanding—though slightly less so in July—as new order rates continue to contract, supplier deliveries improve and prices soften to acceptable levels," ISM Manufacturing Committee Chairman Timothy Fiore said. "According to Business Survey Committee respondents' comments, companies continue to hire at strong rates, with few indications of layoffs, hiring freezes, or headcount reduction through attrition."

The S&P Global manufacturing PMI was revised slightly lower to 52.2 in July from the flash estimate of 52.3, putting it further below the 52.7 reading in the previous month.

Construction spending fell by 1.1% in June, following a 0.1% decline in May. That was partially offset by a 0.4% gain in multi-family buildings.

Boeing (BA) shares jumped 6.1%, the top performer on the S&P 500 and the Dow, as a strike was temporarily avoided at three of the US plane maker's defense manufacturing facilities.

Winter is coming and Russia is threatening to cut off natural gas supplies to Europe. Politicians are panicking. It is a big opportunity for investors and traders. Gazprom announced last week that it would cut gas flowing to Germany to only 20% of capacity. The Russia-owned company transports natural gas to Europe through the Nord Stream-1 pipeline. The crisis is a boon for nuclear power, and Cameco Corp. (CCJ).

Russia cutting the supply of natural gas to Europe was a likely outcome. President Vladimir Putin began threatening to choke off supply only weeks after the invasion of Ukraine in retaliation for western sanctions. It is the nightmare scenario for Europe. The International Energy Agency notes that 45% of natural gas supplies in 2021 to the continent flowed from Russia. Now Putin is playing his ace card, only months ahead of winter.

The decision could have a big impact in the United States, too.

Global inflationary pressures have finally started to wane. Commodity prices such as lumber, copper, and wheat since June have all been in steep decline. However, depleted supplies of natural gas in Europe are causing prices to spike. Those prices cause electricity costs in the United States to surge, where 38% of power plants use the commodity as feedstock.

The Biden Administration has been pressing the Europeans to offset gas shortages with increased nuclear power production. And there has been notable headway.

The European Parliament voted earlier in July to label some nuclear projects as green energy. The move paves the way forward for more nuclear power use on the continent, according to a report in the New York Times. Germany previously planned to phase out all nuclear power by 2022. Nuclear power has been derided for four decades. The number of plants globally peaked in 1996 when 17.5% of all electric power was generated in those facilities. Since then public opinion has soured and the political will to keep plants open waned badly.

A complete meltdown in 1986 at the Chornobyl nuclear reactor in Russia led to the depopulation of 68,000 people across 1,000 square miles in northern Ukraine. And 154,400 Japanese were evacuated in 2011 when a nuclear plant in Fukushima was damaged following a tsunami. Nuclear power plants all over the world began to close. Today these facilities generate only 10.3% of the world’s electricity.

Cameco Corp. is uniquely positioned to take advantage of both the current geopolitical crisis and the inevitable transition back to nuclear power. The Canadian uranium producer holds the world’s largest deposits. Executives at Saskatchewan-based company are strategically removing supply from the market in an effort to maximize the value of those assets.

Without uranium, the fissionable material used in all nuclear facilities, there is no power generation.

During a conference call in February, chief executive officer Tim Gitzel told analysts that since 2016 Cameco has removed 190 million pounds of uranium from the spot market. Gitzel notes that the Netherlands, Poland, Estonia, Slovenia, and Serbia are now studying their nuclear options. Also, the European Union has labeled nuclear power as a climate-friendly investment, giving ESG funds a green light to begin investing in the sector.

Uranium prices are currently at $49.50 per pound, down from a high in June of $64.50. Despite the weakness, prices in 2022 are still ahead by 16%. And the heavy metal has more than doubled since January 2021. Cameco is licensed to produce 53 million pounds annually. At a price of $25.77, Cameco shares moved out of a downtrend earlier this month. The stock trades at only 25.7x forward earnings and 8.6x sales. The current market capitalization is a modest $10.6 billion.

Prior to the war in Ukraine, the prospects for nuclear power seemed dim. Now winter and a Russian power play to choke off natural gas supplies to Europe are giving the power source new vigor. Cameco is cornering the market for uranium, the key commodity at the center of the nuclear power rebirth. Longer-term investors should consider buying shares.