Only three S&P SPDR sectors were higher last week, with Consumer Staples (XLP) and Utilities (XLU) the best sectors, while Communication Services (XLC) and Materials (XLB) were the worst, with the SPDR S&P 500 ETF Trust (SPY) falling by -1.13%. 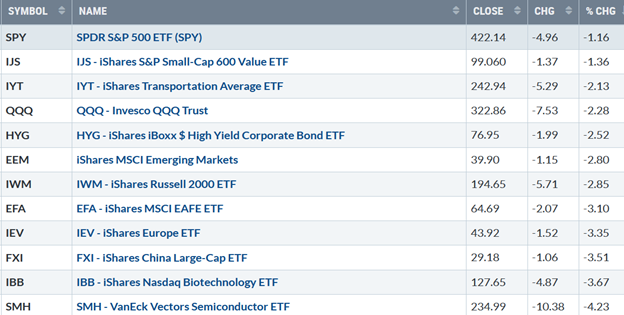 Investors shifted to risk-off last week, with buyers turning to sellers. Technology, Semiconductors, Hi-Yield Bonds, and Small Cap Growth stocks were under selling pressure. International markets, including Europe, China, and Emerging Markets, reversed lower, weaker than the US market failing to gain momentum after joining the rally the previous week.

Weekly market breadth no longer improved and was negative for the New York Stock Exchange Index (NYSE) and Nasdaq. The NYSE had 904 advances and 2588 declines, with 145 new highs and 104 new lows. There were 1675 advances and 3543 declines on the Nasdaq, with 270 new highs and 239 new lows.

There was an improvement in breadth at the end of May and early June after breaking its April downtrend (green line), but it was short-lived, followed by weakness in Nasdaq.

Since July, market breadth had steadily improved after breaking the January downtrend (brown line), leading to a powerful advance in the Nasdaq until last week.

The Nasdaq AD line remains in an uptrend (purple line). However, further weakness would break the uptrend and lead to a short-term correction in Nasdaq. On the other hand, a turn up taking out the high would be positive.

VIX turned up last week as the major averages fell, closing at 20.60 (green circle). If VIX rises early in the week above 24.00 (brown dotted line), look for intra-day volatility to rise and a sign that the latest short-term pullback is likely to continue. On the other hand, a turn down below 20.00 would likely lead to higher prices.

New lows warned of a potential sharp pullback, high volatility, and "panic selling" for most of 2022, closing above 150. As the market started to move lower in January 2022, new lows rose sharply, peaking at 792 on 1/24 and again on 2/24 (red circles), implying an increased risk of further selling pressure. Investors in early May unloaded stocks, and new lows expanded to 1063 on 5/09 (pink circle), then on 6/16 (purple rectangle), new lows made a new high of 1092.

Learn more about the significance of new lows in my book, Journey to Wealth, published on Amazon.

New lows contracted in June and no longer are in the high-risk zone above 150.

New lows closed at 57 on 8/19 (light blue circle), indicating a low risk of a significant decline.  However, they did rise last week and are no longer below 25, the lowest risk zone. It would be encouraging if new lows contracted immediately early in the week.

On the other hand, a warning would occur if new lows increase to above 150, then I would expect further weakness. 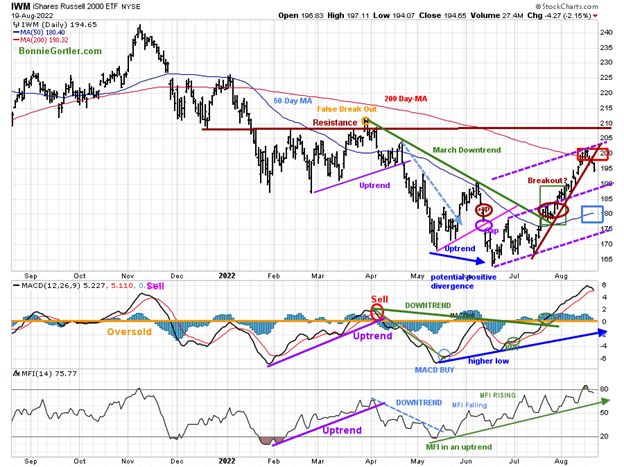 IWM failed to break out above resistance at 210.00 (orange circle) and turned down, forming a downtrend (green line). In late July, IWM broke its March downtrend.

MACD (middle chart) remains on a buy but is now close to giving a sell. It’s been a strong rally off the lows, with MACD breaking the momentum downtrend from April, rising above 0, and making higher highs. This bodes well for a second rally attempt following the completion of the latest decline, but no guarantee.

Money Flow (lower chart) broke the April downtrend (dotted blue line) and has accelerated. It turned down from the highest reading since the April peak and remained in an uptrend. 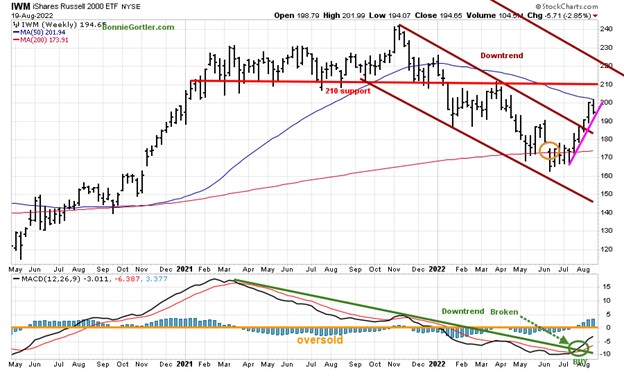 The Russell 2000 (IWM) closed above its price downtrend from November 2021 (brown line) three weeks ago, shifting the intermediate trend to up.

MACD (bottom chart) is on a buy (green circle) along with breaking the downtrend from March 2021 (green line). The worst of the downside momentum is likely completed.

The chart shows the daily Invesco QQQ (QQQ), an exchange-traded fund based on the Nasdaq 100 Index. The two top holdings in QQQ are Apple (AAPL) and Microsoft (MSFT), with over 20.00%. The direction of both these stocks will impact the direction of QQQ.

The bottom chart is MACD (12, 26, nine), a measure of momentum; MACD gave a sell after a pattern of higher highs. No negative divergence has formed as QQQ made higher highs which is positive. The first decline is likely not to be a significant pullback followed by another rally attempt toward the upper channel (top green dotted line). 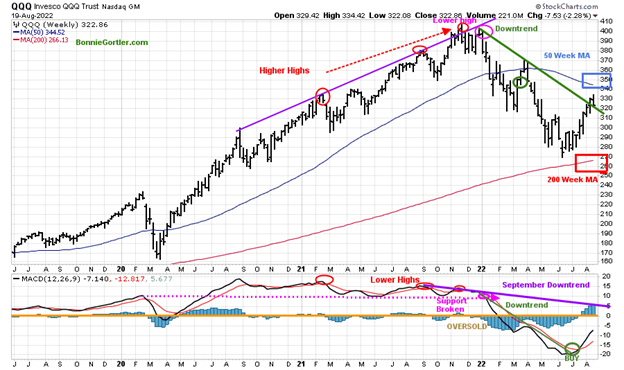 The top chart shows the weekly Invesco QQQ Trust (QQQ) making higher highs peaking in November 2021 (red circles) but failing to make a new high in December 2021, followed by a beginning of a downtrend.

The downtrend was broken on 8/12, but QQQ had no followthrough to the upside last week, stalling below a downsloping 50-Week MA. The intermediate trend remained up despite the decline last week.

MACD (lower chart) remains on a buy breaking the downtrend from January, which implies downside momentum has slowed. 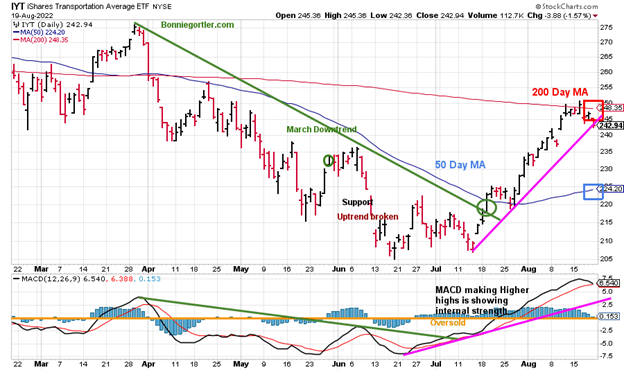 The Transportation Average (IYT) broke its price downtrend from March (green circle) in July and then consolidated near the 50-Day Moving Average before moving higher.

MACD remains on a buy, above 0, making higher highs, but any weakness will give a sell. However, it would be a short-term positive if IYT shows strength and leads the market higher. 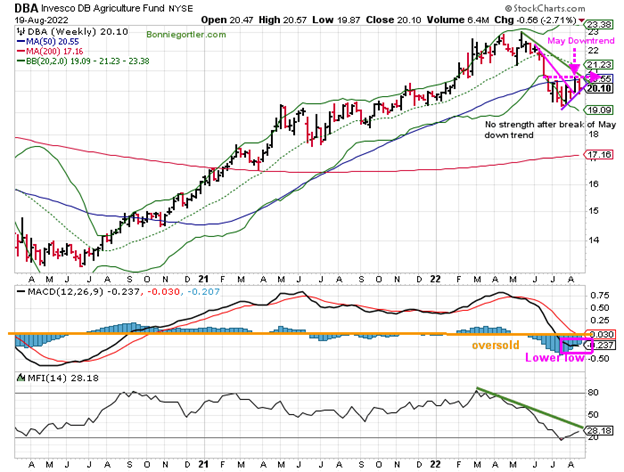 The Invesco Agricultural Fund (DBA) broke the steep May downtrend (pink line) but stalled down by 2.71% last week, closing at 20.10. It was one of the few gainers on Friday, up 0.95%

MACD has flattened, but no buy as of yet, but it could occur soon if DBA shows strength.

MACD made a lower low last week along with weakness in other commodities. To manage risk, if you invested in DBA, keep a tight stop and close your position if DBA closes below 19.80.

The S&P 500 (SPX) fell by -1.21%, closing at 4228.48, stalling below the January downtrend (pink line) and the 200-day Moving Average. A close above both would be bullish and attract more buying from institutions.

What to Keep an Eye on This Week for Direction? 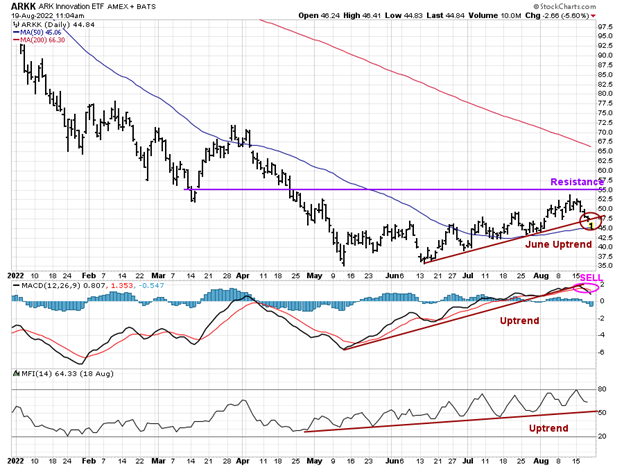 ARK Innovation (ARKK) is an actively managed ETF by Cathie Wood that seeks long-term growth and is highly volatile.

ARKK reversed sharply from its lows in June through August, and on Friday, 8/19, ARKK broke its June uptrend (brown line), failing to penetrate above resistance (purple line).

MACD, after continuous higher highs, is now on a sell. Risk has increased of a pullback.

Be alert to the possibility of 10% swings in both directions at any time. With MACD on a sell and the uptrend broken, it’s wise to protect your profits and reduce your holdings if you have investments.

Apple, the largest holding in QQQ, has led technology higher since the June low.

Be alert that AAPL broke its hourly uptrend from July 28 on Friday, 8/19.

Market breadth weakened in combination with uptrends penetrated.  Short-term technical indicators have turned down from overbought readings. Previous resistance is now acting as support that needs to hold. Despite the decline last week, another rally attempt cannot be ruled out after the latest pullback is complete. Let the price action determine the direction where the market will go.

I would love to hear from you. If you have any questions or comments, email me at Bonnie@Bonniegortler.com.