The Recession Trade Has Begun

Stocks rolled over and never recovered, suggesting to some that it’s time for Wall Street to price a real recession into the market, states Jon Markman, editor of Strategic Advantage.

No, it probably hasn’t done that yet, as you will see in part in a brief study of the latest hellacious mom-and-pop sentiment data.

That level is also the most likely place where buyers might resurface. It is a good place for bears to begin covering short positions. And for bulls, 3,640 is the proverbial line in the sand, their last critical support level.

All of this comes as traders brace for a recession in the US economy. Consumer discretionary stocks—i.e., retailers—are dead to investors. Shares of casinos, theme parks, hotel operators, and upscale retailers like Lululemon (LULU) on Thursday were all outsized losers.

After the close, Costco (COST) shares sank after the company reported underwhelming financial results. Expect the benchmark to get pulled toward 3,640 heading into the weekend.

The order on Wednesday to buy ProShares Ultra Short S&P 500 (SDS) at $45.30 lmt did not fill. The leveraged inverse fund closed at $49.86. Given the proximity to the first target, the open order no longer makes sense. Cancel it. We will have a new trade order soon.

Consumer discretionary was the steepest decliner, while healthcare and communication services were the only gainers. 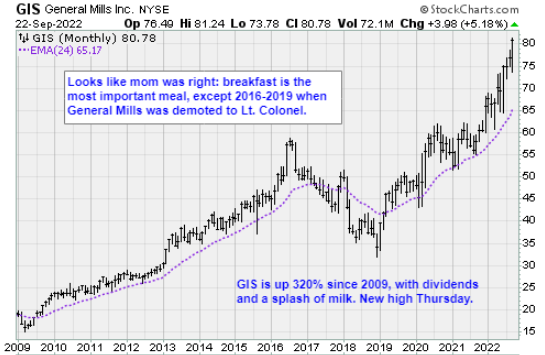 The breakout in cereal king General Mills looks like milk and sugar compared to most other stocks, which are having their breakfasts stolen by bearish punks. Kellogg (K) is also a winner this year, along with Post Holdings, Inc. (POST). In a recession, the market bets on Cap’n Crunch over captains of industry.

With inflation still more than three times the Fed's 2% target, investors should be questioning if even a rise to 4.4% by the end of the year, or higher still, to the Fed's new projected terminal rate of 4.6% by the end of 2023 would reinstate price stability, Stifel said in a note Thursday. Such hypothecation is particularly true given the nature of price pressures.

"Raising rates well beyond 4%, a level which may prove adequate to quell demand-side inflation, would do little to address further price pressures as a result of lingering Covid-19 policies or international conflict," Stifel chief economist Lindsey Piegza said. It is likely to "further undermine growth, all but ensuring a recession or a significant downturn in activity," she added.

In other words, she thinks the Fed is applying horse medicine to tonsillitis, a total mismatch.

Monetary policy works with a lag, and the speed at which the Fed is moving is a risk, but the Fed seems willing to take it, Morgan Stanley said in a note Thursday. "The higher the peak the Fed aims for, the greater the risk of recession."

In company news, leading drug makers Merck (MRK), Johnson & Johnson (JNJ), and super-insurer UnitedHealth (UNH) were the best-performing stocks on the Dow. Bristol Myers Squibb (BMY) and AbbVie (ABBV) are also among the best performers. Drugs and health insurance might be all that will be left standing when the Fed decides to stop beating us up for mistakes that it made.