For those with diversified portfolios, there’s no reason you can’t own a couple of names in the energy group, and some recent earnings reports have revealed ridiculous cash flow outlooks going forward, notes Mike Cintolo, editor of Cabot Growth Investor.

Devon Energy (DVN) is getting yanked around by oil prices on a day-to-day basis, but the Q3 report left little doubt that the future is bright.

In the quarter, the company produced a whopping $1.1 billion of free cash flow (about $1.60 per share), which led to a fixed-plus-variable dividend of 84 cents per share in the quarter (to be paid out December 30), up from 49 cents in Q2.

Just as bullish was the early 2022 outlook — at $70 oil and $4 natural gas (both solidly below today’s prices), Devon believes it will earn about $6 per share of free cash flow next year, which would lead to big dividends and, as was announced yesterday, a likely beefy share repurchase program as well ($1 billion authorization, equal to nearly 4% of the outstanding stock).

Shares didn’t react much to the news as oil prices have been a bit weak in recent days, but the overall chart looks fine, with the stock holding near its highs even after a big move. 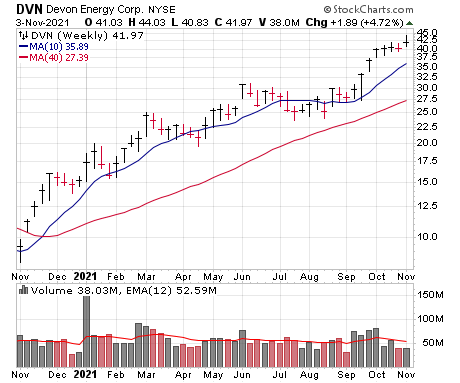 With DVN and other peers reporting jaw-dropping cash flow numbers and offering bullish projections and spending discipline, we think investor perception is steadily coming around to the view that the oil group, after years in the doghouse, could be in a sustained rally. Hold on if you own some, and if not, you can enter here or on dips of a couple of points.

Diamondback Energy (FANG) is probably our favorite oil name outside Devon and one you can consider if you want more exposure: Q3 results were amazing, with free cash flow (cash flow less all CapEx) of $4 per share, another dividend hike (its third of the year; yield now 1.8%) and further debt reduction ($1.3 billion worth since March; and no debt maturities for three years) as output came in a bit above expectations.

But all of that pales in comparison to what’s possible in 2022 and beyond — the top brass believes it can keep output level with relatively tame CapEx (breakeven oil price around $32!), and that should lead to ridiculous results, with nearly $13 of free cash flow per share even if oil slips to $60 per barrel, and a ridiculous $19 per share if oil averages $80 (a bit below the current price). 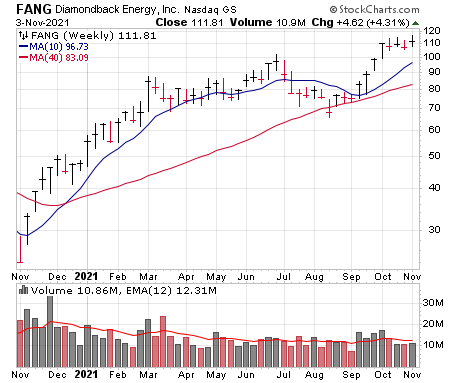 Just as important is the stock action — FANG enjoyed four straight weeks of heavy-volume buying in September when the group kicked into gear, tightened up nicely in October and is starting to perk up again. Barring a collapse in oil prices, FANG’s path of least resistance should remain up.