Trupanion (TRUP) is the fastest growing provider of insurance for veterinarian bills in the country. Yet, the company isn’t well known, explains Mike Cintolo, editor of Cabot Top Ten Trader.

A big reason for that is because pet insurance has little market penetration–just 1% of North Americans have policies. But the figure has been growing steadily and the future looks bright: A deal recently struck with Chewy (CHWY) makes Trupanion the exclusive pet insurance seller on the site.

Starting in the spring, Chewy will market the firm’s plans to its 20 million regular pet supply customers. That’s a big step toward fulfilling management’s belief that Americans will embrace pet insurance as hedge against budget-busting bills for injured or sick pets. Indeed, in other markets, like the U.K., pet insurance policies are held by 25% of owners.

In the U.S. and Canada, even a modest step toward European levels could power Trupanion sales for years. More than half of households in the two countries own a dog or a cat, with about 120 million furry friends visiting the vet at least once a year.

At the U.K. level of insurance, the market is $34 billion annually, compared to the $2 billion current levels generated for the North American industry in 2020. To date, Trupanion has had success building relationships with vets, who get paid immediately when patients check out with the insurer’s unique point of sale system.

Over the last four quarters, the company has grown sales more than 39%, to $647 million, losing 80 cents per share in that timeframe. Trupanion and Chewy haven’t released sales projections for their venture, but Trupanion management was already predicting next year would see a 25% to 30% rise in sales and operating income before the deal was announced.

Technically, TRUP spent most of the year in a wide range between $70 and $130, with some big downs and big ups during that time, but now it looks like that consolidation period should provide a strong base for higher prices. 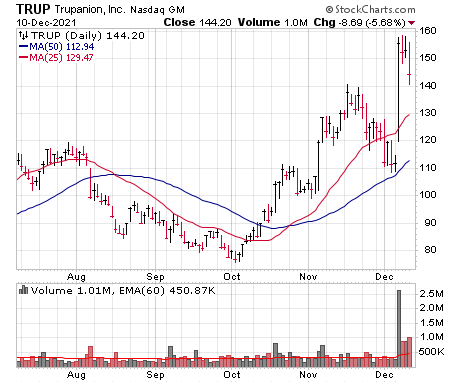 The stock began to get going in early October, reacted well to earnings in November, and after pulling back sharply with the market in early December, exploded higher last week on the deal with Chewy. Expect volatility, but we’re OK taking a swing at TRUP around here.