The severe subsurface damage that is hitting the majority of investors’ portfolios as the Wilshire 5000 Index has lost over $9.5 trillion in value since the start of the year; that is more than the entire U.S. stock market was worth at the start of the last bull market in March 2009! asserts Jim Stack, money manager and editor of InvesTech Research.

At the beginning of 2021, we introduced our list of “top” warning flags to watch as a way to instill discipline in our strategy while working to objectively identify a market top in equities. Major risks were relatively sparse at that time; however, when we updated the table last August, a handful of warning flags had started to emerge.

Since the August update, warning flags have continued to drop into place, which has made the market outlook significantly worse than it was nine months ago.

One of the most dynamic changes since August has come in the monetary environment. With inflation at a four-decade high, interest rates have soared from record low levels (see graph below) and the Federal Reserve is being forced to make half percentage point rate hikes for the first time since 2000.

Students of market history know that most bull markets come to an end as a result of unfavorable monetary conditions. Thus, the continuing inflation pressures and the Fed's corresponding policy tightening are major red flags. 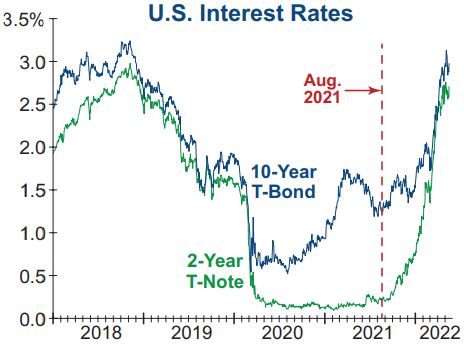 Consumer Sentiment was one of only a few red warning flags in our August 2021 issue, as the Index had unexpectedly fallen below its pandemic low. Sentiment has continued to crater since then and is now at one of its lowest readings on record.

With surging inflation negatively impacting consumers' purchasing power and confidence, there is a growing probability that a slowdown in spending will lead to a recession.

Much to the dismay of investors, bonds — which typically act as a portfolio safe haven — have also fallen by double-digits this year. While bonds have not been a great source of diversification this year, those who have attempted to diversify their portfolios with cryptocurrencies have fared even worse.

Nowhere is the carnage in the crypto market more evident than in our InvesTech Crypto Miners Index (below). This Index, which tracks 10 of the leading crypto mining stocks, was designed to warn of a potential meltdown in the cryptocurrency market. It confirmed this warning in April after it broke through critical support, and it is now down -80% from its peak. 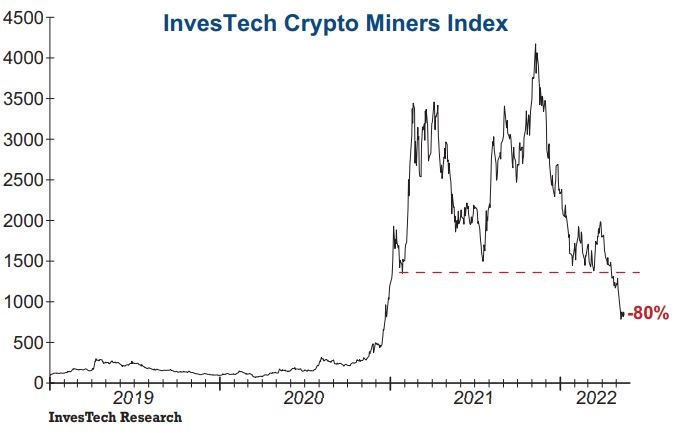 Soon after the warning from our Crypto Miners Index, Bitcoin began threatening its critical support. Other cryptocurrencies have also plummeted in a similar fashion, and the crypto market has now lost over $1 trillion since Bitcoin’s November peak.

Finally, NFTs (non-fungible tokens) — which have been perhaps the most brazen part of the speculative bubble — have seen transactions drop by over 90% as many buyers realize that ownership of an arbitrary digital certificate is often worthless.

Meanwhile, in August of last year, we raised a red warning flag for margin debt after it made an initial break from its extreme 3.5 post-pandemic peak. Margin debt, which measures the amount of money borrowed by investors to purchase stocks, can signal a major reversal in trader psychology and thus prove a valuable tool in identifying important market tops. 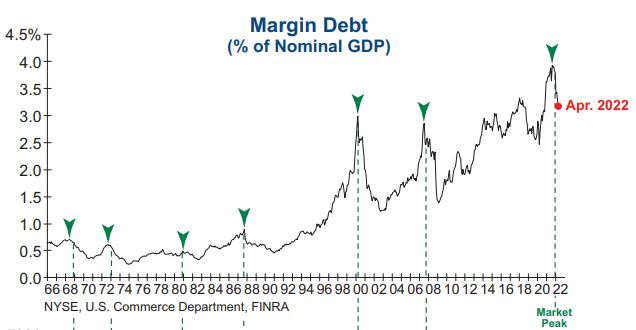 Since last August, the steep drop in margin debt has solidified its warnings and is now one of the more dangerous warning flags overhanging the market outlook ahead.

As warning flags started to emerge last summer, we began taking defensive steps preemptively in our Model Fund Portfolio — well ahead of most investors. Not only did we incrementally reduce the overall allocation of the Model Fund Portfolio, but we also underweighted the highest risk areas which have now suffered significant losses.

Since last month's issue we have further reduced exposure in our Model Fund portfolio, which currently has a net invested allocation of 51% with holdings that are defensive in nature.

You must choose your own investment odds. While an economic “soft landing” is not impossible (e.g., 1994), history proves it is an elusive outcome. We will continue to steer a disciplined and defensive course in our Model Fund Portfolio until the weight of evidence improves.