It’s been an unpleasant year for investors — especially for those who sought comfort in bonds, or who were locked into traditional 60/40 portfolios. Globally, government bonds are on track for the worst year since 1949, observes Monty Guild in Guild Investment Management's Market Commentary.

As far as bear markets for stocks go, in the past 140 years, there have been 20 bear market cycles including the present one. On average they see a peak-to-trough decline of 37.3% over a period of 289 days. Although history is only ever suggestive, and not a guide, that average bear market duration would suggest the market has some more downside, but could bottom next month (in October).

If it keeps to historical patterns, and the S&P 500 gets perhaps 10% lower, it would be somewhere near where a more normal equity risk premium would put it. While it may not be easy to stomach, all of this simply suggests that what is playing out — despite the intense drama exacerbated by our 24/7 news and social media fixation — is normal.

What’s more, what follows this decline will very likely also be perfectly normal: a recovery from the eventual low, regardless of exactly when that might be.

At this point, investors should be focused not on the difficulty of the year thus far, but on the emerging opportunity being created by the reset of prices to more rational levels, the adaptation of businesses and investor psychology to new macroeconomic conditions, and the clearing of excesses and distortions created by extraordinary pandemic-era fiscal and monetary interventions.

The bottom line is that the long term data suggest (but does not guarantee nor offer exact timing) that while the average bear market results in a 37% decline, the ensuing bull market recovery produces index returns well over 100%.

Of course, it can take six months for tighter policy to begin working its way through the system — which is to say that the market’s response thus far has been psychological, and we have only just begun to see the “objective” effects. Those objective effects will intensify in coming months. (The Fed only just stopped purchasing mortgage-backed securities, for example.)

We anticipate that long-duration and speculative assets will continue to be under pressure, and with real rates continuing to rise and the dollar functioning in its traditional role as a safe-haven asset during times of global turmoil, we think gold will remain under pressure as well.

The chart below shows that, accounting for a long lag in transmission, sharp Fed tightening episodes correlate quite closely with a deceleration in S&P 500 earnings growth: 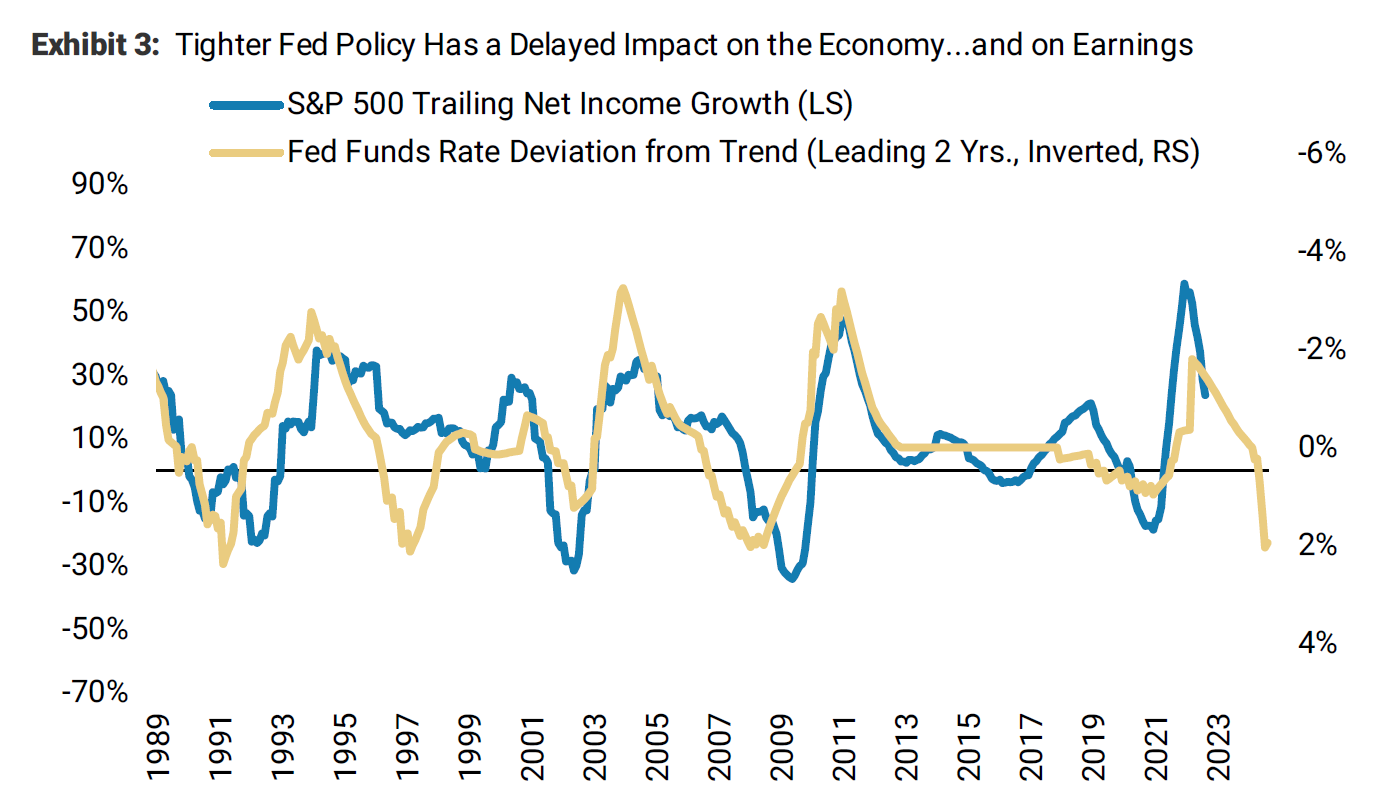 The “dot plot” following the latest Fed announcement of another 75 basis point increase in the Fed funds rate shows it topping out at 4.5% in 2023.

In the coming months, the year-over-year inflation comparisons could moderate as we lap some big early 2022 price spikes; however in our view, it is unlikely that a Fed funds rate at 4.5% would be enough to lay inflation to rest; all other things being equal, the Fed would have to go higher for longer. But all other things are not equal.

When Will the Pivot Happen?

Expectations for earnings are being reset; valuations of assets that depend on long-suppressed interest rates are being reset; slowly, Fed tightening is trickling into the system. All of that is setting up an opportunity for investors; but it is when the Fed pivot really comes into view that the opportunity will be activated.

Therefore, much depends on the timing of the eventual pivot — and there are plenty of events outside the United States that could force Chair Powell’s hand in spite of his determined, hawkish communication. Russia’s actions in occupied Ukrainian territories are one item; the related intensifying energy crisis in Europe and the new rise of populist sentiment) is another; unforeseen events in China could be another.

In our view, the biggest risk is a bond market or financial dislocation caused by weak banks in Europe and Asia, and/or by inadequate bond market liquidity in parts of the global financial structure. A big dislocation in either of these areas would cause the Fed to lower rates and increase liquidity in the U.S., and thus the world system.

If the Fed eased off its tightening path as a result of any of these events, it would certainly signal the arrival of a near-term opportunity — even if later, renascent inflation returned for a new round and the whole process got underway again. (That is actually our base case — a relatively short recession now, followed by a pivot and a rally, eventually followed by a renewed impulse of untamed inflation and another recession when the Fed tightens again in response.)

Investors should be planning for the pivot and building their buy list. Leadership will likely be new — although some of the former tech leaders, if they have suffered enough and been kicked to the curb by investors, may be attractive for the rally.

In general, we still like scarcity; providers and producers of scarce resources and goods that are made from them; the real and tangible against hopes and dreams; quality earnings, strong balance sheets, and proven dividend growth.