Last year at this time we were much more concerned and cautious than most of The Street when we made our 2022 Forecast for an Early Year High, a Worst Six Months Correction and a Q4 Rally, recalls Jeffrey Hirsch, editor of Stock Trader's Almanac.

We maintained a large cash position for much of the year and remained on the sidelines through Q3. In mid-August when most traders and pundits were jumping on the bull market bandwagon, we cautioned against the summer-rally hype and warned of another leg down as our Stock Trader’s Almanac Aggregate Cycle pointed to a mid-summer top and a retest of the June lows.

Midterm September and October delivered the volatility and selloff they often do, pushing the major averages to new bear market lows — except for the Russell 2000, which constructively held its June lows. Then on October 4th our Best Six Months MACD Seasonal Buy Signal was triggered and the Q4 Rally we had anticipated was underway.

So now what? Well, unlike last year the Street is full of bears and that has our contrary antenna purring again. We logged a prototypical midterm year bear market here in 2022 and most everyone is calling for the bottom to fall out.

Current conditions remind us quite a bit of 1974 where we had a scattered bottom scenario. S&P and NASDAQ bottomed October 3 and the Dow hit its low on December 6. 2022 was a midterm year like 1974 and there is a steady flow of negative news and dire outlooks.

Our new Aggregate Cycle of the One-Year Seasonal Pattern, the 4-Year Presidential Election Cycle and the Decennial Cycle averages 12.3%. Despite current worrisome conditions, we believe a midterm bear market bottom is in and a new bull market is emerging. Remember Warrant Buffett's wise words: “Be greedy when others are fearful.”

Sweet Spot of the 4-Year Cycle

We are currently sitting in the early stages of the Bullish Sweet Spot of the 4-Year Presidential Election Cycle, which runs from Q4 of the midterm year though Q2 of the pre-election. Over the 3-quarter span Dow averaged 19.3%, S&P 20.0% and NASDAQ 29.3%. 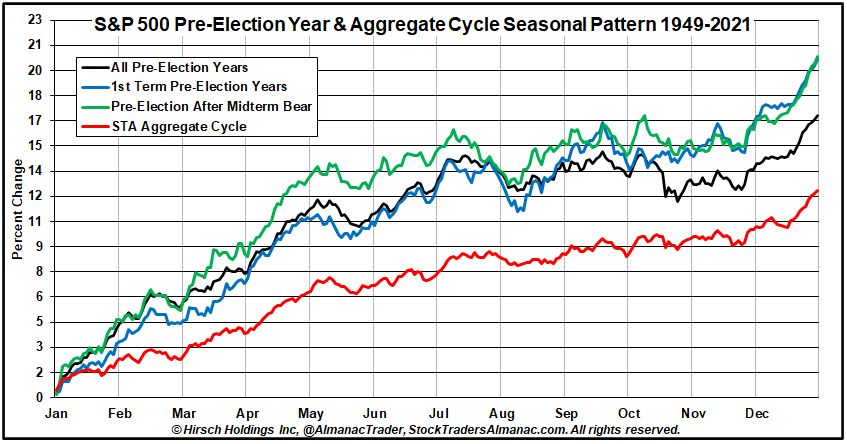 The current 4-year cycle has been more volatile than the average cycle, logging greater than average gains in post-election year 2021 and steeper declines, and a full-blown bear market, in 2022. Perhaps that will equate to outsized “Sweet Spot” gains this time around.

In any event, we are having a hard time swallowing all the doomsday scenarios we are hearing out there. With inflation decelerating, Q3 GDP revised higher to 3.2% from 2.9%, a steady employment picture and the Fed clearly telegraphing it will be done tightening in Q1, we are more inclined to look for a soft landing versus a full-blown catastrophic economic collapse with some positive surprises on the horizon.

It has become increasingly apparent to us that the midterm year bear market is over, and we may have already experienced a mild recession.

Our cycles, indicators and readings of the market are leaning much more bullish. The Fed is almost done. Inflation is falling. China has relaxed its zero Covid-19 policy. With GDP revised higher we see the potential for the elusive soft landing and the usually bullish action associated with pre-election years – especially after the prototypical midterm year bear market we just had.

We will probably experience some early year choppiness. While it sure looks ugly out there, markets love to climb the proverbial “wall of worry.” We contend the worst is behind and a nascent bull is emerging.