Exchange-traded funds exist in even the most unlikely areas of finance, and floating-rate securities are no exception; the largest ETF in this sector is the iShares Floating Rate Bond ETF (FLOT), asserts Jim Woods, ETF expert and editor of The Deep Woods.

FLOT has more than $10 billion in assets under management and offers access to 700 floating-rate securities of investment-grade companies. Floating-rate securities are simply debt instruments that have a variable rate. As such, they usually are tied to some kind of benchmark, such as the three-month London Inter-bank Offered Rate (LIBOR).

These debt instruments gained some degree of notoriety during the “Taper Tantrum” of 2013, in which bond yields drastically increased after investors overreacted to the Federal Reserve tapering off quantitative easing. Floating-rate investments were perceived as a way to get around the short-term spike in yields.

However, floating-rate investments tend to yield less as investors trade an enhanced income stream for greater safety, meaning reduced credit risk and volatility. That being said, FLOT’s 30-day Securities and Exchange Commission (SEC) yield is 2.5%, which is still significantly above the yields of a good many ETFs. 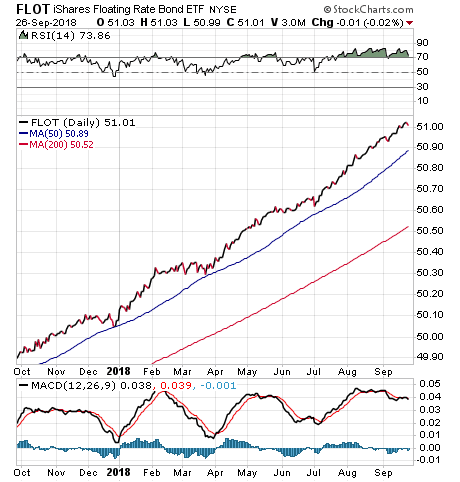 Floating-rate investments are a way to profit during periods of rising yields, and that’s what I suspect we are likely to see as we head into the final quarter of the year. One reason why is because the Federal Reserve is likely to hike rates again in December, and it made that pretty clear this week in the Federal Open Market Committee (FOMC) decision and in Fed Chair Powell’s press conference remarks.

In environments where interest rates are expected to rise, such as now, floating-rate securities can add alpha to a fixed-income portfolio. With FLOT, we get a fund that seeks to track the investment results of an index composed of U.S. dollar-denominated, investment-grade floating-rate bonds with remaining maturities between one month and five years.

More than 50% of the FLOT portfolio exposure is in the banking sector, with consumer cyclicals, 8.2%, and supranationals, 7.8%, being the two next-biggest areas.

Ever since the 10-year Treasury yield bottomed below 1.4% in July 2016, FLOT has outperformed the benchmark iShares Core US Aggregate Bond ETF (AGG), showing a slight gain compared to a loss of 5%. The fund trades with excellent liquidity of about 1.5 million shares per day, or about $78 million. The expense ratio is just 0.20%.