Bonds and dividend stocks are looking pricey, and inflation will eventually take them out. Let's try to figure out when—and how to keep the income coming in, writes MoneyShow's Jim Jubak, also of Jubak's Picks.

We are looking at a bubble in the market for income assets.

Money continues to pour into the government bonds of the United States, Japan, Germany, and other "safe haven" countries, even though yields are negative (after adjusting for inflation), and even though some of these "safe havens" rank among the world's most indebted governments.

Dividend stocks, too, have risen to historic highs even as yields have dipped. For example, an index that tracks the S&P 500 "dividend aristocrats," a basket of 51 stocks that have increased their dividends annually for at least 25 years, hit an all-time high in October.

We all understand the reasons behind this love affair with income assets. Stocks have been scarily volatile for the past decade or more—and threaten to become even more so.

The world's central banks have flooded financial markets with cash, crushing yields, but at the same time promising to keep interest rates extraordinarily low for "an extended period," to quote the Federal Reserve. A sputtering global economy has resulted in low rates of inflation, and deflation often seems a more immediate threat.

But we know we're nearing the end of this cycle. Here's when the bubble might burst, and how to find income right now.

A Bubble That Will Burst
The yield on two-year Treasury notes could drop below the current 0.24%—that's a negative 1.96% yield at recent US inflation rates—but the yield is unlikely to go below zero.

At some point—mid-2015 in the Federal Reserve's most recent formulation—the world's central banks will start raising interest rates again. A return to global growth, simple demographic pressures or the aging of the world's population will lead to higher inflation rates, which will make those paltry yields unpalatable.

Knowing what we know—about the likelihood this is a bubble that will eventually break—when do we take action to avoid getting caught up when it bursts? And when we take action, what do we do?

We're all friends here, so let's be frank: Everyone investing in the markets for income assets believes he or she will be able to anticipate the breaking of the bubble with enough lead time to exit the markets.

Of course, financial history says that won't happen. Financial logic, indeed, says it is true only if you believe you will see the bursting of the bubble before everyone else does. If everyone sees it at once, we're looking at a mad panic at the exits. If just a large chunk of the market sees it coming, we're looking at the kind of move to the exits that accelerates the bursting of the bubble.

Moreover, timing the breaking of this bubble seems especially problematic.

Long-term rates could well move up—hurting bonds and other income assets—before that, if investors see inflation or signs of future inflation, or come to expect future inflation. (Throw in the wild card here of the Fed's program of quantitative easing and its buying, under that program, of longer-term assets, including bonds.)

Sounds exactly like John Maynard Keynes’ lament that to pick the winner of a beauty contest (or winners in the stock market), you have to pick not the most beautiful face, but the face you think the other judges will think most beautiful.

"It is not a case of choosing those (faces) that, to the best of one's judgment, are really the prettiest, nor even those that average opinion genuinely thinks the prettiest. We have reached the third degree where we devote our intelligences to anticipating what average opinion expects the average opinion to be. And there are some, I believe, who practice the fourth, fifth, and higher degrees," Keynes wrote way back in 1936.

That judgment is complicated by the difficulty of predicting major supply and demand trends in the income market—and the effects of those trends on the price of income assets. Right now, for example, because the Fed is buying assets for its program of quantitative easing, there's a shortage of new Treasuries, government-backed assets, and investment-grade corporate bonds.

Supply in those categories, which are currently in high demand from risk-averse investors, is forecast to go up by $1.16 trillion in 2013, according to RBS. But the Fed is projected to buy $1.02 trillion of that supply, leaving just $138 billion for investors.

On the other hand, if 2013 or 2014 saw some solution to the Eurozone debt crisis, the demand for "safe haven" assets will drop and offerings from more governments might qualify as safe havens.

Frankly, as unsatisfactory an answer as it may be, I think income investors who want to know the "when" can't do much better than watching inflation and inflation projections (to judge inflation expectations) and the direction of central bank policy.

A switch from the current aggressively loose monetary policies at the Fed, the European Central Bank, and the Bank of Japan to something like neutral would be a key indicator of a change in the weather.

Be Wary of Risk
Maybe the most important conclusion to be drawn from trying to forecast the "when" and discovering the difficulties in that quest actually falls into the "what" category. If deciding when the turn will come is so difficult, and the likelihood of calling that turn correctly is so modest, then the last thing an investor would want to be doing now is reaching for yield by piling on risk.

You can see the potential punishment in going for yield by adding risk in the junk-bond market over the past month or two. Average junk-bond yields hit a record low of 6.14% in September, as yield-hungry investors drove up the price of junk bonds. Yields, however, had climbed back to 6.85% as of November 19, as investors decided to sell this asset class to reduce the risk in their income portfolios.

That rise in yield is a result of a decline in the price of junk bonds, so right now, junk-bond investors who bought when yields were 6.14% and prices were high are looking at a 10.4% hit to their capital.

Does that mean income investors should resign themselves to low yields like the safe 1.65% offered by ten-year Treasuries right now? That seems almost as unattractive an alternative as loading up on risky income assets. Since investors can't predict the "when" of the turn, they could wind up stuck with a 1.65% yield for quite a long while.

Unusual Income Plays
I think the solution is to get opportunistic and creative.

In this very volatile market, individual income offerings will get temporarily mispriced by nervous investors. Forget about allocations to entire income-asset classes. Jump on those mispriced assets one by one.

For example, shares of Targa Resources Partners (NGLS) took a pounding from $42.83 on November 6 to $35.96 on November 16 on news that the company would price a secondary stock offering at just $36 a unit.

It's typical for secondaries to be priced below the current market in order to attract new money. But in this case, the pricing seems to have been aggressively low, and that took down the stock itself. After all, if you can buy the secondary at $36, why pay $42 for what's already on the market?

What makes this drop a very interesting opportunity is that the capital raised is going to finance an acquisition that takes this pipeline master limited partnership into North Dakota's Bakken shale formation. (For more on this fast-growing oil-producing geology, see my column "Ready for the US energy boom?")

Targa is buying Saddle Butte Pipeline's crude oil pipelines and natural gas gathering and processing operations in the Williston Basin for $950 million. The growth potential here is very solid—oil and gas production climbing in North Dakota—but the region is underserved by pipelines, with 74% of North Dakota crude traveling by (more expensive) truck.

Targa, which operates in the Barnett and Wolfcamp areas in Texas' Permian Basin and in Louisiana's Tuscaloosa play, raised its target for 2013 adjusted EBITDA (earnings before interest, taxes, depreciation, and amortization) by 10% to 15%, and kept its projections for distribution growth for 2013 over 2012 at 10% to 12%.

Because of the sell-off on the secondary, Targa Resources currently trades with a yield of 7.2%. I don't see a level of risk in domestic energy pipeline partnerships to make me shy away from that yield. At the moment, I think Targa is simply mispriced, so I'm adding it to my Jubak's Picks portfolio.

Income Without Dividends?
Some of the most interesting income plays right now are stocks that don't pay dividends. Highly leveraged companies with big bills for interest payments are restructuring their own balance sheets to bring down the cost of their borrowing. That lower cost falls straight to the bottom line.

Buying the stock of one of these companies won't get you any actual income, it's true. But you do get the benefit of low interest rates.

The most interesting plays like this are in countries where improving economies and government economic policies are bringing down overall interest rates in the market. (Brazil is a good example.) This is especially the case in countries—such as Colombia and Mexico—that are being rewarded for sound governance by upgrades to their sovereign credit ratings.

In Brazil, take a look at Hypermarcas (trading as HYPE3.BZ in São Paulo), the country's largest consumer health company, which in July refinanced bonds that had paid 113.72% of the interbank rate at 105%. Or food processor Marfrig Alimentos (MRRTY), which just raised $543 million in a stock offering to pay down pricey debt.

I think it's too early to give up on income assets—but it is certainly time to work harder at finding the opportunities this market still offers. We're close enough to the turn in this income-asset rally that you can't just buy assets by the bucket anymore. 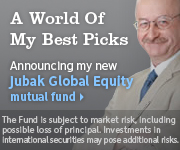 Full disclosure: I don’t own shares of any of the companies mentioned in this post in my personal portfolio. The mutual fund I manage, Jubak Global Equity Fund, may or may not now own positions in any stock mentioned in this post. The fund owned shares of Urbi Desarrollos Urbanos as of the end of September. For a full list of the stocks in the fund as of the end of September see the fund’s portfolio here.