Gold Shone Bright in 2022, But You Ain't Seen Nothing Yet 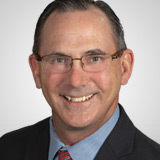 Sponsored Content - After last year’s performance in investment markets, we will all gladly move onward, and it won’t take much at all to move upward, says Rich Checkan, president & COO, Asset Strategies International.

Happy New Year! Here’s to a happy, healthy, and prosperous 2023. Onward and upward!

Last year, precious metals and oil (and commodities in general) held their value.

Everything else was an epic failure.

Here are the numbers for the year…

I have two words for you…Federal Reserve.

For most of 2021, the Federal Reserve was a laughingstock. They caused inflation and the “everything bubble.” They denied inflation existed. They claimed it was transitory. They blamed it on others.

Then, late in 2021 and all throughout 2022, they switched gears. Although they have yet to admit they caused inflation by shutting down economies, gunking up supply chains, inflating the money supply, and juicing demand by putting all those excess dollars in the hands of consumers and businesses, they became tough and resolute on fighting inflation.

Chairman Jerome Powell and the Federal Reserve became the “pin” that popped the “everything bubble.”

And since they did so with such aggression and resolve…they decimated the bond market as well. So, as stocks fell, the traditional buffer—bonds—cratered as well.

At the same time, according to Santa Clara University professor emeritus Edward F. McQuarrie, the bond market turned in its worst performance in roughly 250 years.

But look on the bright side. At least, Chairman Jerome Powell keeps telling us the Federal Reserve feels our pain and is determined to defeat inflation. 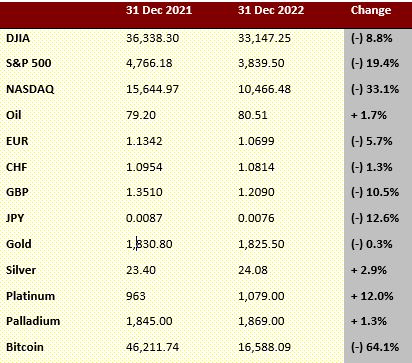 I spent a good part of last year trying to convince people that gold and silver were doing their job. Despite oil and precious metals turning in the only break-even or positive performances on the chart above, I’m not sure many people are convinced even today.

I had one comment here recently on my Getting Rich video where a client suggested silver was the worst investment he had ever made. He said that silver's slightly positive performance in 2022 was drastically out-performed by stocks and bonds.

While the chart above suggests otherwise, I know from where our long-time client and listener is coming. Investors hear about persistent inflation at the worst levels in 40 years, and they immediately expect gold and silver to rocket to the moon. Further, it is unsettling to see years of lower gold and silver prices as stocks—until last year—have been making new US dollar highs for years.

You tend to feel like you missed something. And you did…

1) You missed the wealth effect of seeing you net worth grow to dizzying heights basis your stock and bond performance.

But you also missed seeing the air come out of that balloon at an alarming rate last year.

2) You missed leveraging your gains to even higher and more dizzying heights.

But you also missed the margin calls when the value of the assets you were holding fell below the amount of money you borrowed to purchase them.

3) You missed buying all those neat gadgets and doodads that your neighbors bought.

But you also missed out on being over-extended and having to use your credit card to pay for groceries and utilities.

Boring but stable isn’t all that bad in the end. 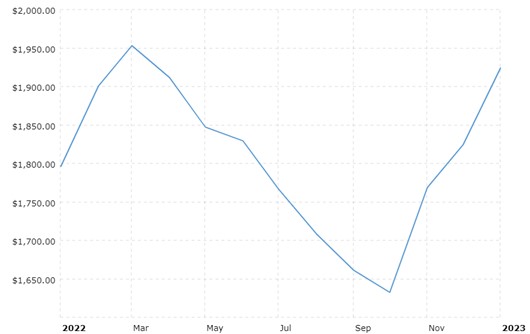 We fully expect this year to begin as last year ended.

Unfortunately, Chairman Powell has already shown his hand. He slowed the rate of increase in December…50 basis points versus 75 basis points. I expect that to continue for a rate hike or two.

Next, I expect we will see a pause in rate hikes.

I see no other way for this to play out. Unlike Chairman Paul Volcker in the seventies and eighties, Chairman Jerome Powell has an anchor around his neck…in the form of over $31 trillion in debt. Very soon, if not already, Chairman Powell will be unable to pay the finance charges on the debt. In other words, he won’t be able to service the debt.

That is called currency default, and Chairman Powell cannot go there.

Plain and simple, there is an end to this interest rate hike cycle, and it is not very far away. As a result, all the tough talk on inflation is falling on deaf ears. Investors know these rate increases will end soon.

However, I don’t see them ending before Chairman Powell and the Federal Reserve trigger recession. And many feel this recession will feel much more like a depression. After all, as mentioned at the start, last year’s numbers suggest that…and they also make a pretty compelling case that we are already there.

The same way you did last year.

Here’s what I suggested last year…verbatim….

“I do believe at some point this year investors will start to see the futility of the Federal Reserve’s position. When that happens, the Titanic’s deck chairs will be less important than that enormous iceberg—let’s call that inflation—the Titanic is about to hit.

When that realization occurs, you will wish you had already bought your alternatives to the US dollar…

Until then, you have a prolonged opportunity to buy well. And buying well is one of the best ways we know to Keep What’s Yours!

This is a great time to bank some profits in equities…where P/E ratios are at dizzying and unsustainable heights…and preserve that purchasing power with the alternatives listed above.

This is a great time to make alternative investments in your Individual Retirement Accounts (IRAs).

This is a great time to cryogenically freeze your purchasing power before the US dollar’s fleeting strength flees your portfolio.”

The only thing we had wrong last year was the allocation to Bitcoin. But since that allocation—for a speculation—is no more than 1% to 2%, you did not lose much there.

If you had banked profits in equities, you saved anywhere from 10% to 33% in losses, and you would have preserved them in precious metals.

I fully concur with Tom Dyson of Bonner Private Research…

“KEEP the dial set to maximum safety. KEEP away from bonds and the major stock market averages. Continue holding lots of cash and physical gold. Stay very discerning about what you invest in.”

In fact, as the US dollar continues losing value as it did the last quarter of 2022 (10% in 90 days), you should be even happier this time next year.

The time to act is now. We are here to help.

Call us at 800-831-0007 or send us an email to set-up a consultation…now…today! Let us help you ensure your retirement and non-retirement portfolios are protected against depreciating US dollars.