Many of you have asked me to present a series of technical articles as opposed to trading behavior commentaries. Accordingly, here’s the third in a series about cyclical behavior in the capital markets, writes Jake Bernstein of Jake Bernstein on Futures.

Cycles and the pending bull market in cocoa

The theoretical side of any system or method is often a thing of great beauty. However, knowing how to make the sausage is an entirely different story.

Theoretical traders enjoy the romantic aspects of their assertions but actually applying methodologies and concepts such as cycles is an entirely different matter.

My theories, no matter how much validity they may have, would be useless to you as a trader or investor unless you had a rule-based procedure for the application of the methodologies and concepts.

Let’s put my theory to a test.

Let’s examine the cocoa market in terms of its future prospects. While cocoa may not have the sex appeal of bonds or stock index futures, in the long run, it’s all about the money.

Many traders would take issue with the idea that cocoa is actually a much more stable market than either stock index futures or crude oil.

Why: because I consider cocoa to be a “pure” market affected by a relatively limited number of fundamentals whereas stock index futures and crude oil respond to a wide variety of geopolitical and fundamental factors. But this concept is for discussion another day.

Let’s take a look at the cocoa chart shown below and take a brief analytical overview. 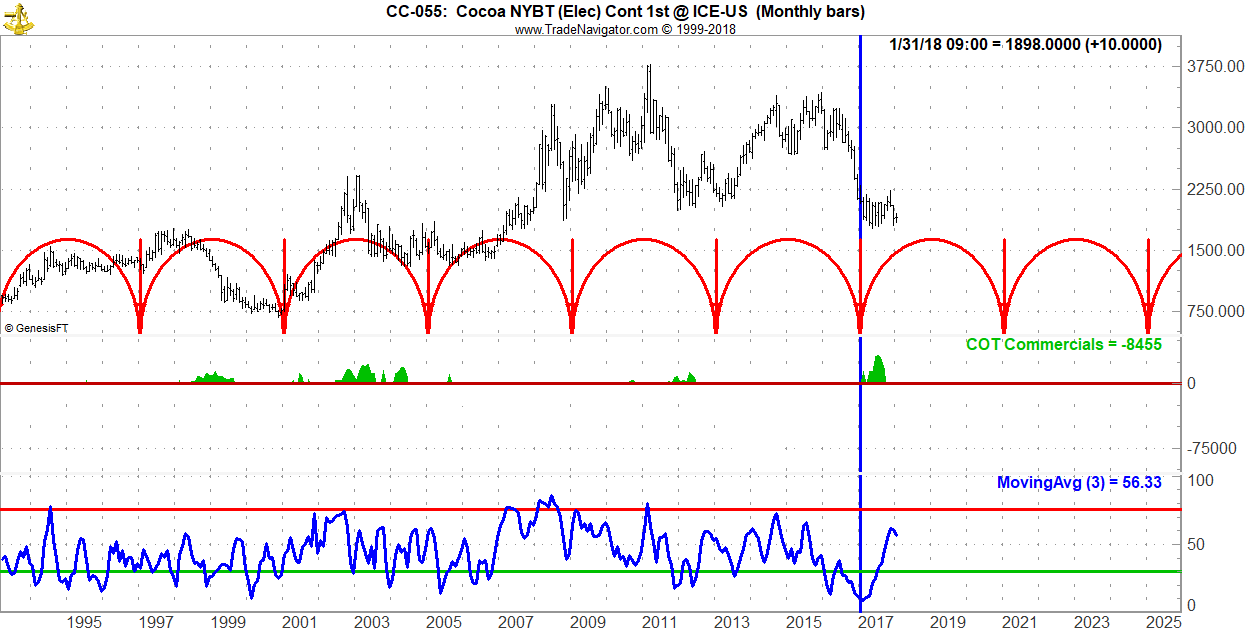 The monthly continuous cocoa chart above shows a fairly reliable approximate four-year cycle is measured from low to low.

Clearly, the cycle is not perfect. Nonetheless, it does tend to pick lows quite well and seems to be fairly stable.

The first conclusion I reach is that in early 2017 to late 2016 the cycle was expected to reach a low. At that time the indicator at the bottom of the chart (which is a three-bar moving average of small trader sentiment) was at its lowest level in many years.

Since extremely low small trader sentiment correlates closely with significant market lows, this bit of information corroborated the expectation that a low is due.
Now, look at the green area in the middle of the chart which shows commercial activity. As you can see, commercials in the cocoa market were net buyers suggesting that they considered prices sufficiently low to begin long-term accumulation of futures contracts

The last step in this equation is timing.

Now that we know what to expect we need only look for a timing indicator to confirm the move. In future articles I will attempt to show you some timing indicators.
Trade well and prosper!

The stock market ended 2020 with a moderate bang, which suggests that at least in the early going, 2...

Taking profits is extremely important when trading. After all, you only make money when you actually...