Back in 2010-2011 Greece was at the epicenter of Europe’s financial woes. Now it’s Turkey. Turkey is actually a much larger economy than Greece, with more than four times the GDP and seven times the population. However, Turkey does not use the euro (EUR) so its recent troubles pose less of a threat.

The chart below of iShares MSCI Turkey Index ETF (TUR) shows that in dollar terms, Turkish stocks have lost half of their value in 2018 and are revisiting their lows of 2008-2009. 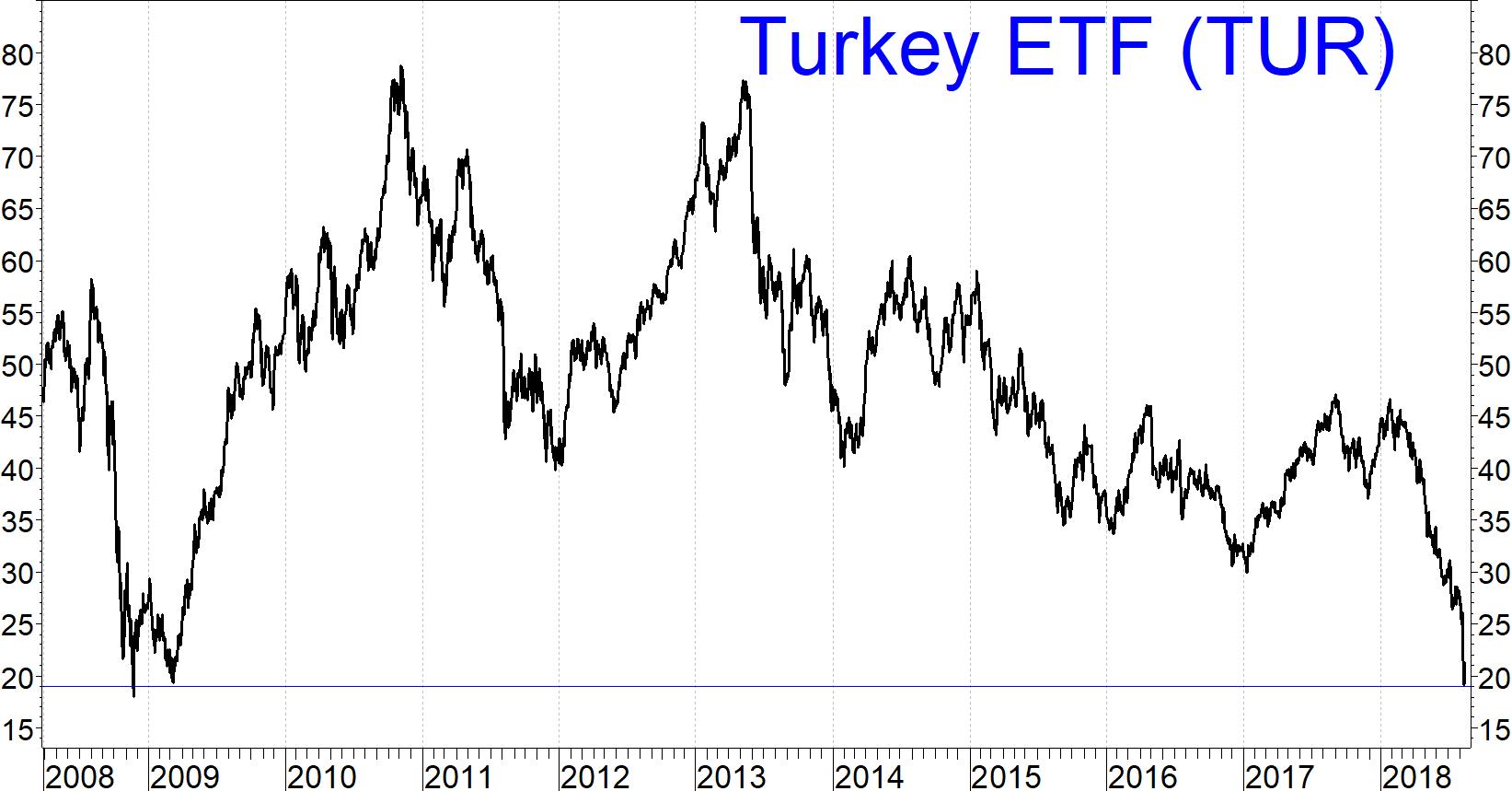 Even though Turkey, unlike Greece, can theoretically bail itself out by printing more lira, its troubles do pose risks to European and American banks.

This is a setback for European financial stocks, which rallied from the depths of the post-Brexit-vote correction to outperform U.S. financials until early this year. 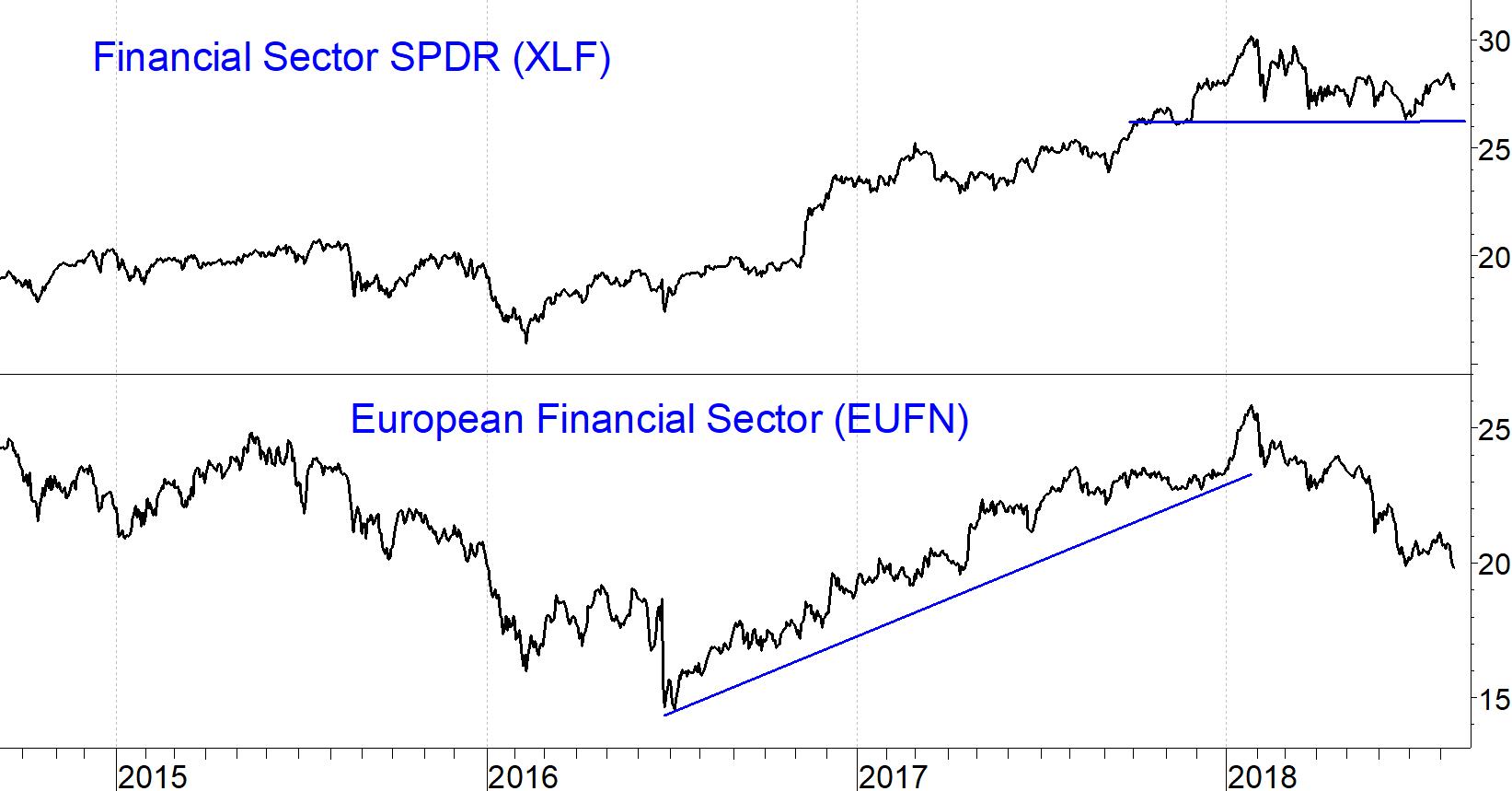 The iShares MSCI EAFE Index ETF (EFA) did well relative to the S&P 500 SPDR (SPY) in March-April but turned down, now hitting its lowest relative strength compared to SPY since the inception of EFA in 2001.

EFA could enjoy support near current levels in the 65-66 range but there is no reason yet to step in. MACD is oversold and still on a sell signal. We could see a bullish positive divergence form between EFA and its MACD if we see a good bounce in EFA.

Nonetheless, our models continue to show greater opportunity in the U.S. than in EFA.

Even though Turkish stocks bounced on August 15, at least as of mid-day the broader emerging stock market is taking a hit, with the iShares MSCI Emerging Markets Index ETF (EEM) falling 3% to touch its lowest level in 13 months. The 200-day moving average of EEM/SPY is proving to be a successful indicator of which sector is favored. (I actually use a 10-month moving average of the ratio.)

This switched to favor SPY over EEM back in April, which was a good time to sell EEM. (See chart below.) As with EFA, we could see a positive divergence if EEM bounces. However, a similar formation back in May that would normally be bullish instead failed to see any rally in EEM.

Long-term trends seem to be operating against emerging markets stocks despite their attractive valuations relative to developed country stocks. Best to stay away until there is clear evidence from the EEM/SPY ratio that price trends have turned back in favor of emerging markets. 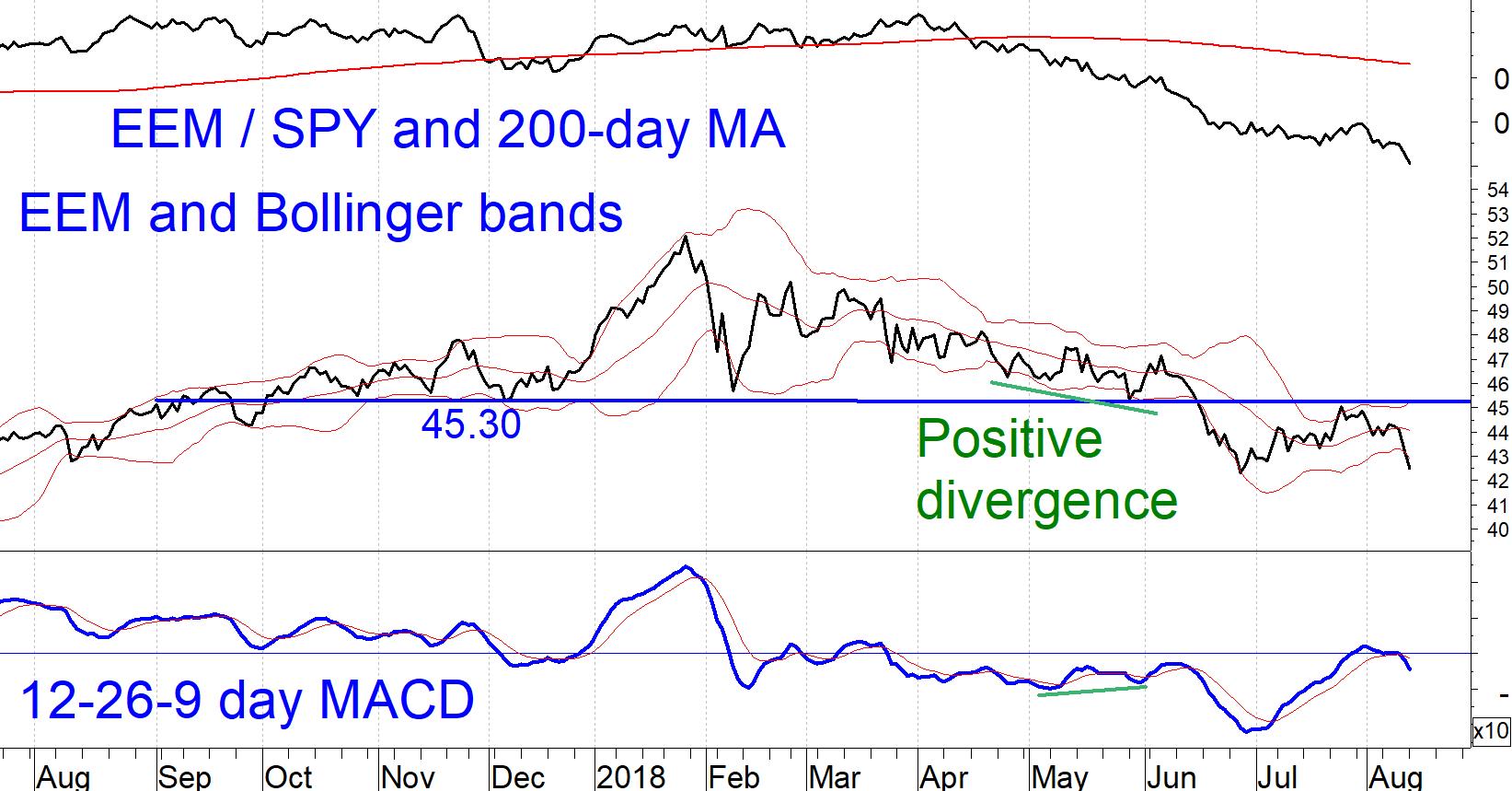 One thing hurting emerging markets is strength in the U.S. dollar. Since the U.S. has such large trade deficits, the markets seem to believe that if a trade war does break out, the U.S. will be a relative beneficiary (or at least will lose less).

Eleven trillion dollars of emerging market debt is denominated in dollars (about 37% of total EM debt from nonfinancial corporations).

The U.S. dollar ETF (UUP) is at its highest level in over a year and is within 4% of its high of the past ten years.

MACD is on a Buy signal. I wouldn’t chase the dollar rally here because there is a good possibility that UUP will stall in the 26.75 area that has capped off all the dollar rallies in the past ten years. However, even if the dollar stabilizes near current levels, this year’s dollar rally (UUP up 6.5%) has increased the debt service burden on emerging market economies. 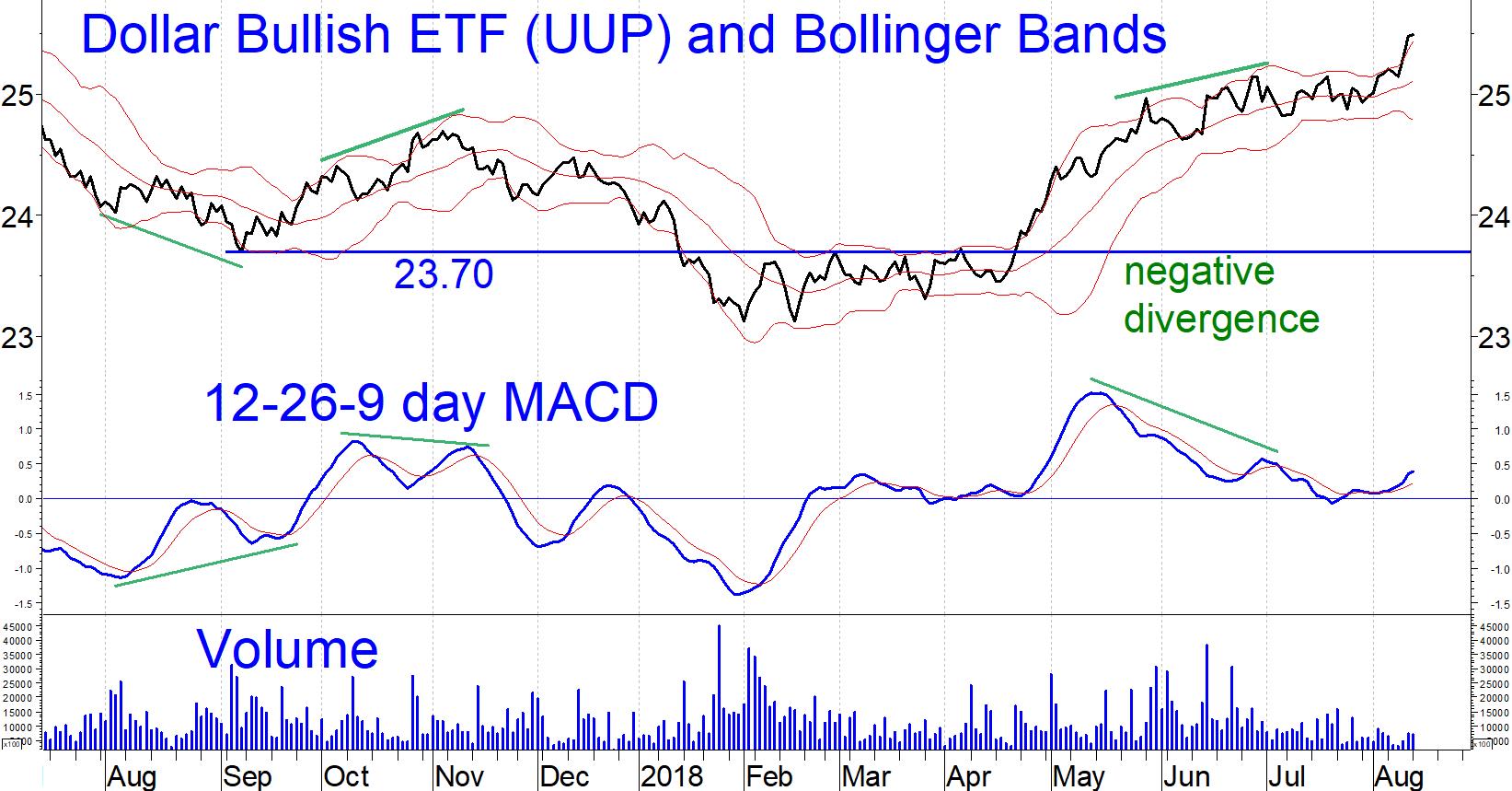 Bottom line: My general approach is to avoid foreign equities unless you have a specific reason to be in them. Right now, trends strongly favor U.S. over foreign equity ETFs.