My worldview is that the U.S. economy is currently strong, but probably going to go into a recession in the next 1-2 years, writes Don Kaufman Saturday.

Usually consumer sentiment reports aren’t vitally important to my economic analysis because the consumer is impacted by political leanings and sentiment doesn’t always correlate with retail sales. I will always follow these surveys, but I don’t take them as seriously as other reports.

However, the latest University of Michigan August Sentiment Index, released on Friday, was interesting because the preliminary Michigan survey showed optimism was waning while the Conference Board report showed confidence was at the highest level since 2000.

Let’s review the final sentiment reading. The final reading was 96.2 which beat the consensus for 95.5 and the prior reading of 95.3. This was above the highest estimate of 96. This is quite the reversal from the preliminary number which missed the consensus. Technically, the overall number is still bad because it’s down from 97.9 in July, but when you take the first number into account, it shows improvement. The acceleration from the middle of the month caused the pace in the second half to be in the low 97 range.

University of Michigan too negative

The University of Michigan acts if the result was still negative in its summary of the report as it wrote the following, “Although there was a small uptick in late August, consumer sentiment remained at its lowest level since January. Most of the August decline was in the Current Economic Conditions Index, which fell to its lowest level since November 2016. These results stand in sharp contrast to the recent very favorable report on growth in the national economy.”

As an investor who is always trying to be on the cutting edge of data, I like to focus on the most recent results which were good in this case. 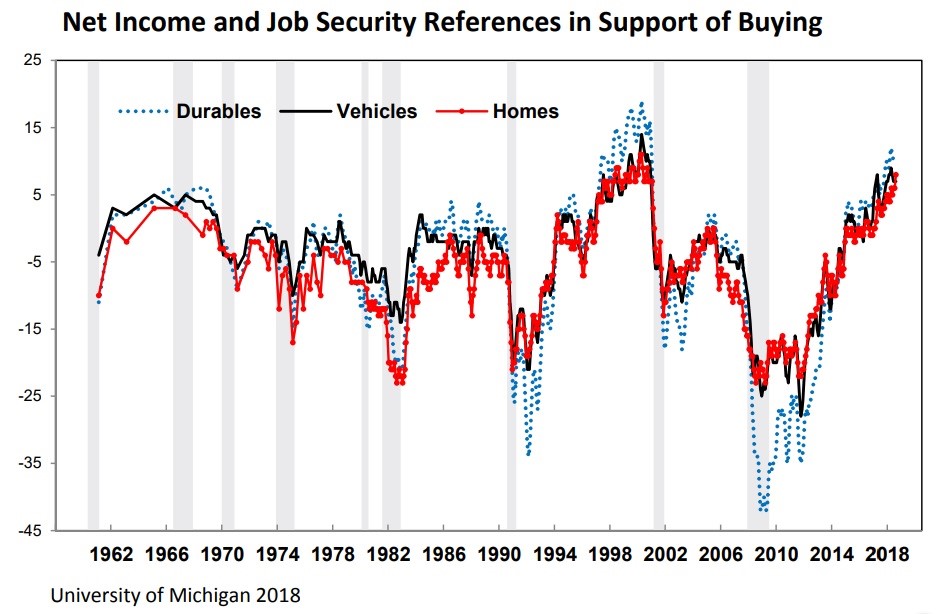 Inflation estimates increased 0.1% to 3% and the 5-year outlook for inflation increased 0.2% to 2.6%. These readings are at 4-year highs because of growth expectations improving not because of tariff fears. This wasn’t as bad of a report as it looked in the preliminary one.

The chart above shows the net income and job security references in support of buying homes, vehicles, and durables are the highest since the late 1990s.

It’s no surprise job security is strong because the labor market is adding new jobs quickly and it is nearly full. The jobless claims on Thursday showed there were 213,000 new claims which was up 3,000 from the previous week, but still near the cycle low.

The monthly jobs report is next Friday. Economists expect 198,000 jobs to be created, the participation rate to fall from 62.9% to 62.8%, and average hourly earnings growth to accelerate to 2.8% from 2.7%. As the PCE report showed, income growth is strong.

The chart above differs strong from the chart highlighted in the last report which showed how poor buying conditions were. That’s because incomes and job security are helping purchases, but other catalysts are making conditions tougher. 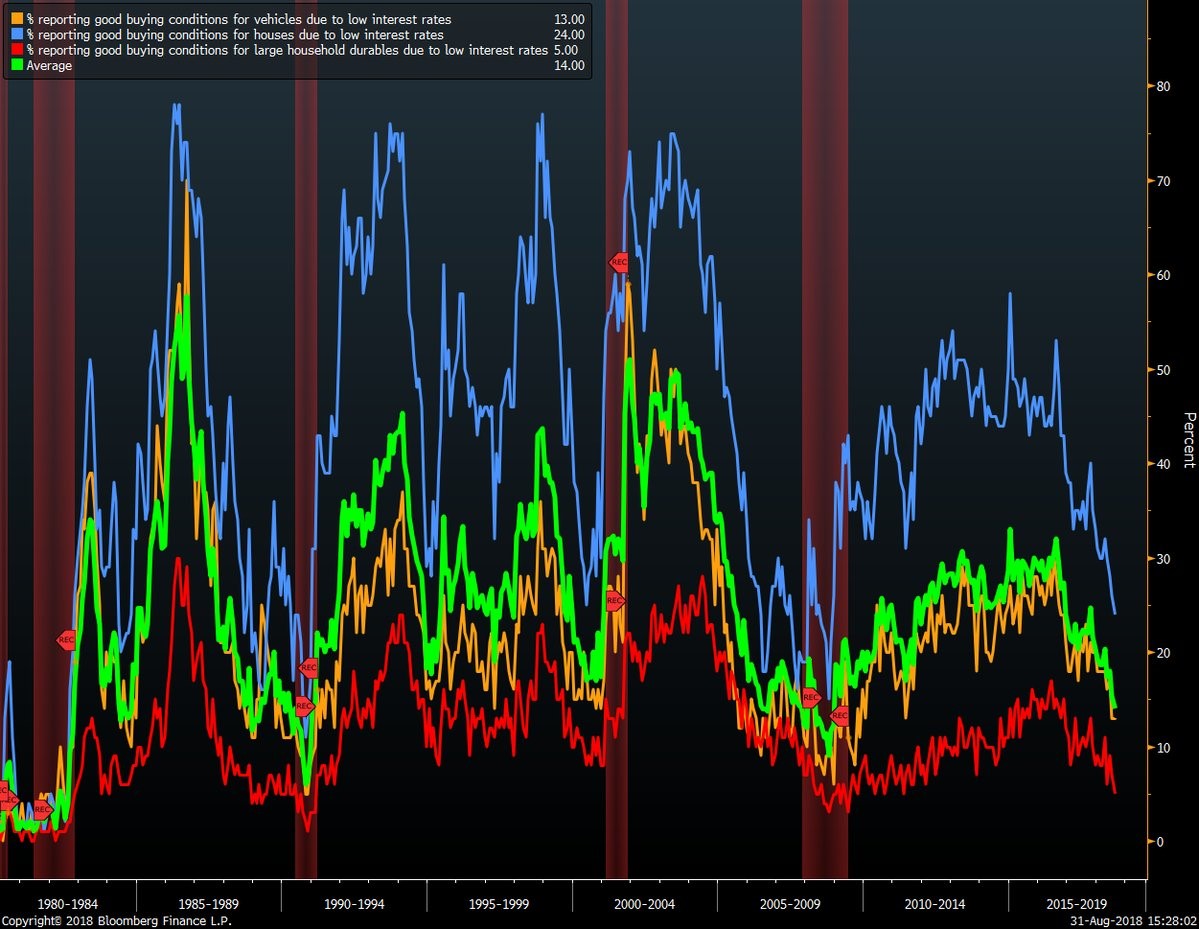 It’s disconcerting to see consumers that interest rate sensitive. They wouldn’t be as sensitive if prices weren’t rising so quickly, especially for housing in select cities such as San Francisco, Seattle, and Denver.

Finally, it’s worth noting that generally it’s not a good sign for this signal to be low because poor buying conditions mean weak consumer spending. It is always low before recessions, but there have been a few false positive recession calls as it is a volatile statistic.

As I have mentioned in previous articles whenever I discuss consumer sentiment, a positive spread between the current sentiment and expectations is bad news because it means the economy is getting better now, but won’t improve in the future as a recession is coming soon.

The basic assertion that this seems to make bears out in historical cycles as you can see from the chart below. Before this chart, I was basing this point on the last cycle; it has worked in the prior two cycles as well.

The higher the difference gets, the more likely there will be a recession and the closer a recession is. Keep in mind, that this chart is using the Conference Board survey which was the more optimistic one. With this metric, current optimism is bad if it isn’t followed up with optimism about the future. The divergence is currently massive as it is the highest since 1980. It implies a recession is overdue. 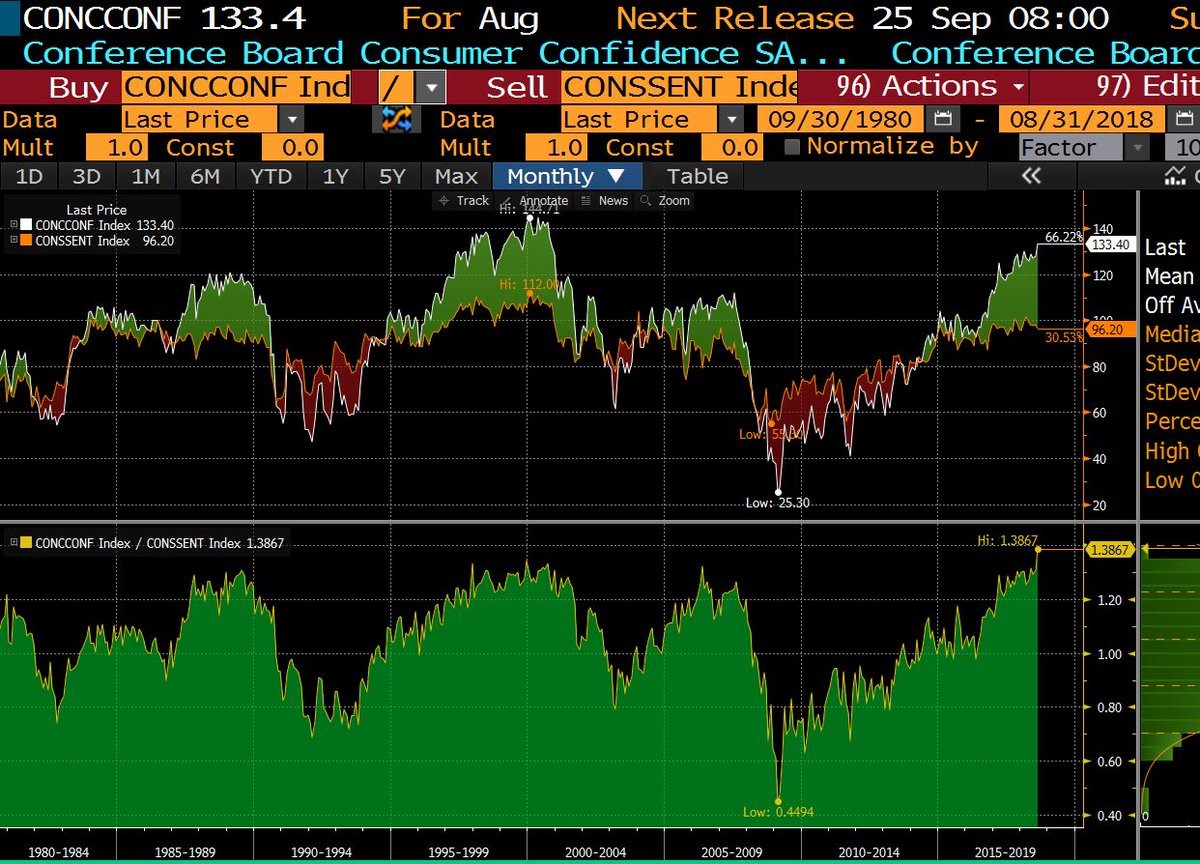 The information in this article confirms my worldview that the economy is currently strong, but probably going to go into a recession in the next 1-2 years.

The University of Michigan preliminary survey was shockingly negative. It was a 2-week fluke as the second half of August showed positivity returning to normal. The bad news is the current sentiment has the greatest divergence from expectations since 1980 which signals a recession is coming in the intermediate term. It’s slightly more bearish than the yield curve.