As Twitter, FB, Google Get Crushed, Is Precious Metals Turn for Real?

Risk is still to the downside and for those looking to go long based on days like Tuesday, it may be best to be in and out of positions quickly because it is not an environment to expect a sustained rally. The only rally that may be coming is in the precious metals.

It’s a long time and starting to remind many people of the 1990s when it stayed in a tight range for three years until it came to its final bottom. They more than made up for it for about 10 years.

Here’s the good news. For all the heartbreak, the low has been holding since 2015 and they made a higher low in 2016. If the low right now were to hold, it would be another higher low.

Why are we talking about precious metals? There is an incredible vibration on the GoldMoney (XAU) mining stocks at 138 weeks off the January 2016 bottom at 38.37. It’s always amazing when this stuff works, so there are a lot of amazing conditions in the market. But its even more amazing when it starts to work in a large time frame. 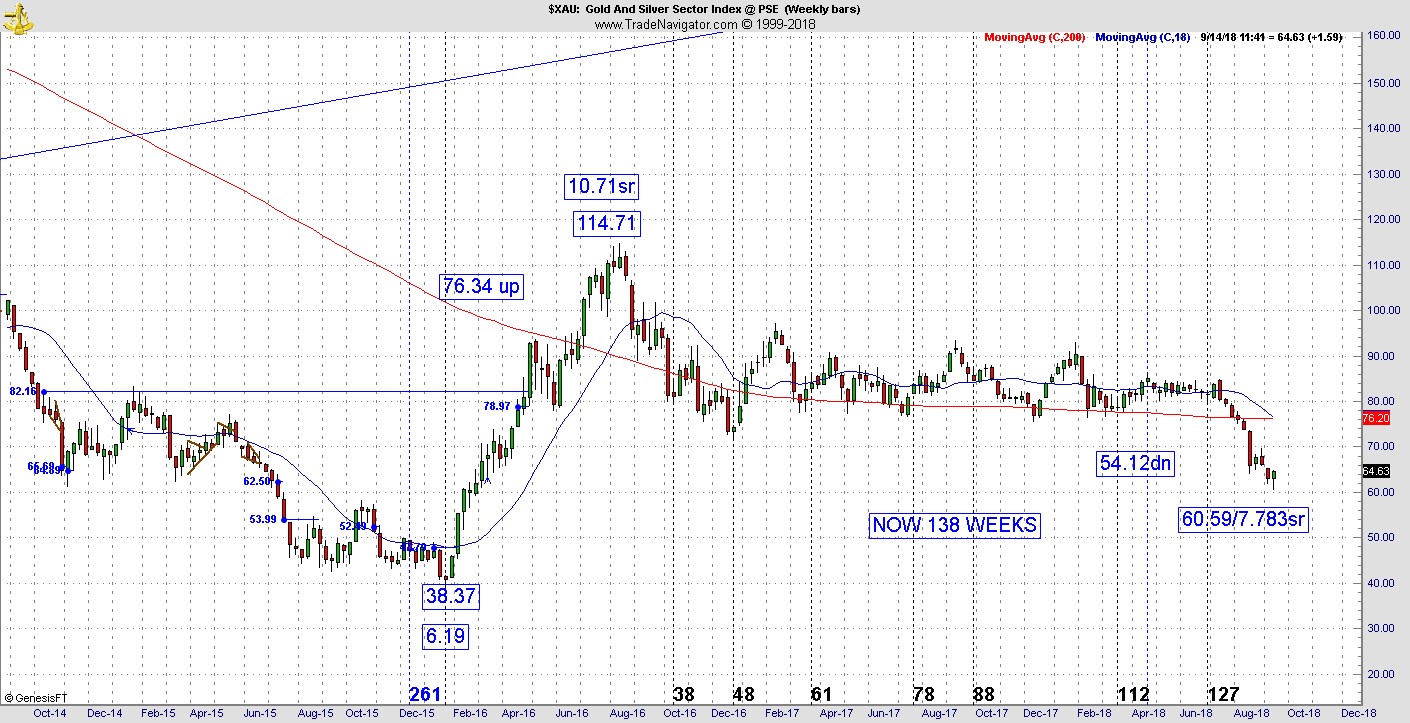 At first the XAU found its low right there on September 11 but on Wednesday it had a big short covering bar. The Gold chart itself bottomed several weeks ago but couldn’t get any traction. There was a failed attempt down on the Sept. 11 but on Wednesday absolutely took off to the upside. Silver found the low on the Sept. 11 which was in the 261-day window dating back to the high a year ago in September 2017.

Why could this time be different? Let’s look strictly at the chart for a minute. The 138-week vibration is a very large degree calculation, covering almost three years. It might take something this big to finally turn the complex around. The caveat is if something this big fails, the bottom could fall out.

In terms of sentiment, there are plenty of reasons why precious metals should do well. We’ve discussed many of them in this column in the past year but we know the drill with the stock market: life goes on, until it doesn’t.

This isn’t a prediction but needs to be said. There is a major hurricane getting ready to hit the Carolinas. Some experts are calling it one of the worst storms to hit that region in decades. Let’s hope they are wrong.

Not many news outlets are talking about one of the biggest risks sitting near the coast in the form of the Brunswick Nuclear Generating Station. It is an older facility from the 1970s that might not be able to handle massive storm surge and runs the risk of not being able to cool properly should the power fail for any length of time.

Financial markets are a game of risk. That doesn’t mean something is going to happen but could happen. With all the other issues, a storm like this wasn’t even on the radar just a few short days ago. What we do know is the risks to censor the social media technocrats continue.

The headline today is Attorney General Sessions is going to meet with several state attorneys general on the Sept. 25 to determine whether to proceed with a more serious investigation than just a few hearings in Congress. Breitbart reported Sessions is “exploring a potential investigation” of companies like Facebook (FB), Twitter (TWTR) and Google (GOOG).

Since these technocrats appeared before Congress last week, they’ve only doubled down on their censorship. Their stocks have been crushed in recent action.

September has been progressing as anticipated. Stocks have been down for the most part but have not made any serious technical violations to any degree.

Next up is an unfortunate hurricane that is going to grab all the headlines in the coming days. The problem is nobody knows what the damage or outcome will be.

But it might not matter simply because the market is a leading mechanism and does not like uncertainty.