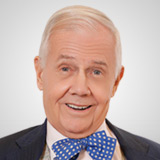 Author, Street Smarts: Adventures on the Road and in the Markets

Renowned investor and Columbus Business School Faculty member Jim Rogers has been cautioning investors that the amount of debt in the United States will continue to accumulate beyond $21 trillion, leading him to conclude that the U.S. currency isn’t a sound investment.

Rogers has stated that other countries including China, Iran, and Russia, attempt to discontinue their use of the U.S. dollar (USD), and that would potentially threaten the dollar to lose its platform as the world’s reserve currency. Rogers gave previous examples where the global financial markets have shifted from other dominant currencies, including the British pound (GPB).

Roger’s recent comments to a variety of outlets echoed his presentation at The MoneyShow San Francisco, “How I see the World Today and What I am Doing About It.” There Rogers referred to previous bear markets in recent times that were caused by debt. He cautioned investors of the severity of a near-term bear market with the amount of debt already accrued.

Rogers has maintained over the course of the year that “the next bear market will be the worst of his lifetime.” Rogers is currently 75.

Click here to view Jim Rogers’ full presentation in its entirety, with portfolio preparation advice and projections for investors.