As Hurricane Michael was pummeling the Florida Panhandle, Wall Street was getting blitzed by Hurricane Algo. But in Chicago, the agricultural commodities were getting a quiet and credible bid, writes Dr. Joe Duarte Sunday. I’m bullish Hormel, Archer Daniels Midland.

Altogether, stocks are ripe for a bounce and the agricultural commodities are getting a weather scare and uncertainty related boost.

A few weeks ago, I noted that what seemed to be an emerging divergence in the New York Stock Exchange Advance Decline line (NYAD) might be the Sell signal to be heeded. Well, needless to say I was right and if anyone followed my suggestions: trade small, hedge, use options, and keep more cash around than usual there is a decent chance that the damage to their portfolios could have been worse.

To be honest I’m not happy about being right, especially when it’s hard to know whether next week will bring more unwinding of weird derivatives and margin call related liquidation by those who didn’t see it coming. Moreover, as bruised and battered survivors of the algo storm all we can do now is to pick through the debris and see if there is anything worth salvaging. Still, even if stocks bounce, it seems as if winter is going to be surprisingly cold and the agricultural commodities seem to agree which is why stocks could face a bit of competition.

If there is something positive to say about last week’s trading it that the death of the recent rally was quick. This could well be a sign that the worst is over and that some sort of bounce is in the cards. Moreover, are there any hedge funds left to mount some sort of offensive? Will companies use the dip to buy back more of their own battered stocks in order to make their earnings look better for longer? And will the algos switch from front running sell orders to front running buy orders?

I don’t recall ever seeing any swifter and more damaging selling than what happened last week. Yet, the net result is a market that is so oversold that the only reasonable direction of prices in the near term should be up*. Yes, there is an asterisk attached to the prior sentence because, as I’ve said multiple times, this time is different. 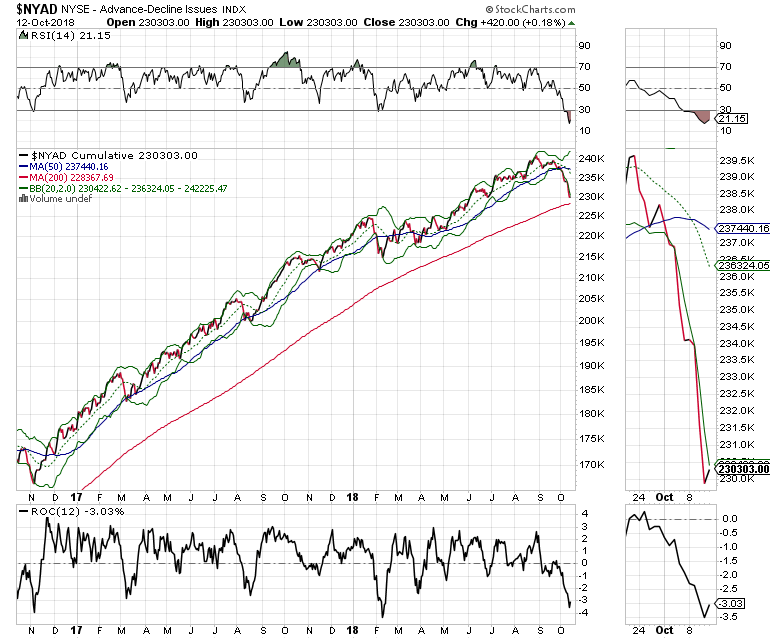 For one, the New York Stock Exchange Advance Decline line, which continues to be the most accurate indicator of the market’s direction since the presidential election of 2016, has not been this oversold since the election, as documented by the RSI reading of 21 it registered at the close of trading on Oct. 12. 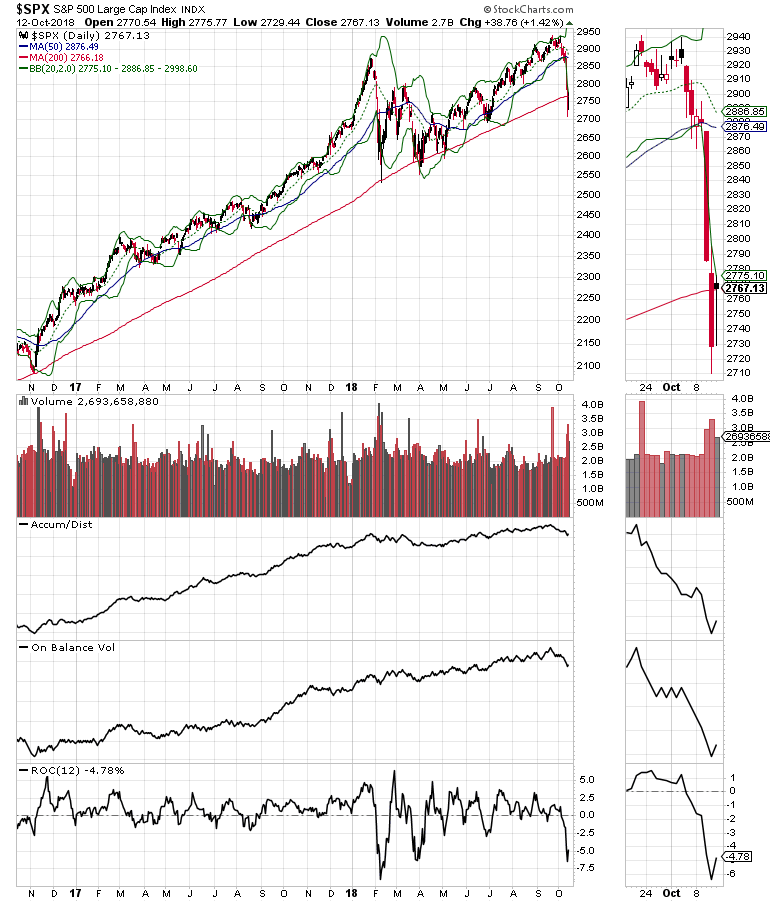 In fact, the algos seem to be following a familiar pattern of taking NYAD to some key support level and doing the expected thing. Note NYAD is now testing the 200-day moving average while RSI and ROC are trying to turn around and mount an advance of some sort. 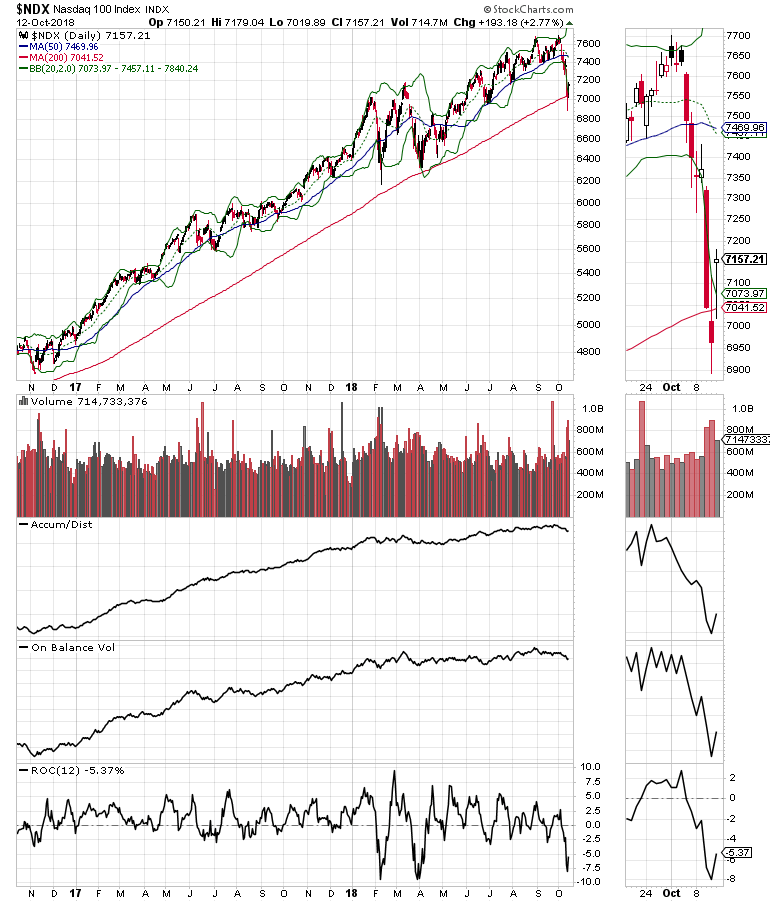 Ditto for the S&P 500 (SPX) and the Nasdaq 100 (NDX) indexes which, predictably broke just below their 200-day moving averages long enough to trigger the last bit of panic selling from capitulators who had been hoping for a bounce on Thursday but didn’t get one. 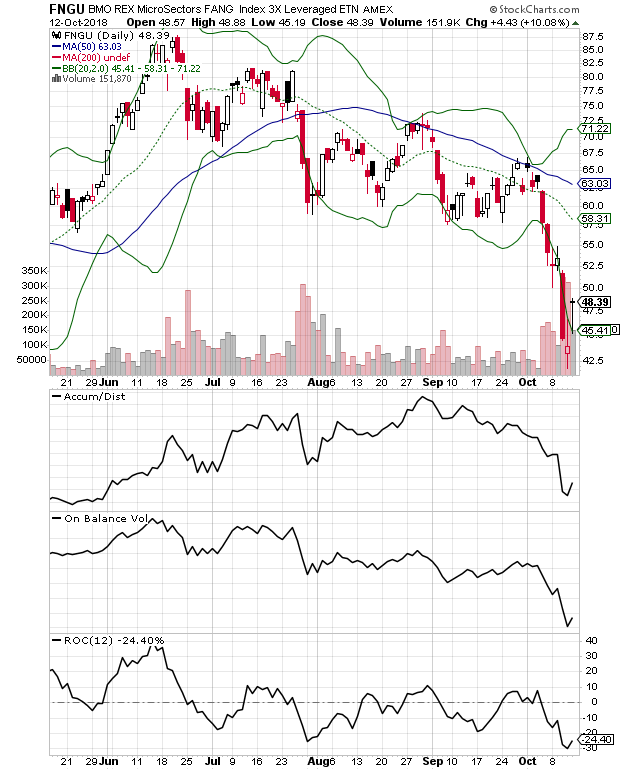 This of course brings me to the FAANG ETN (FNGU), which is off nearly 50% from its June 2018 top and which also followed the algo script at the 200-day moving average and is respectively displaying a set of equally legendary oversold technical credentials. 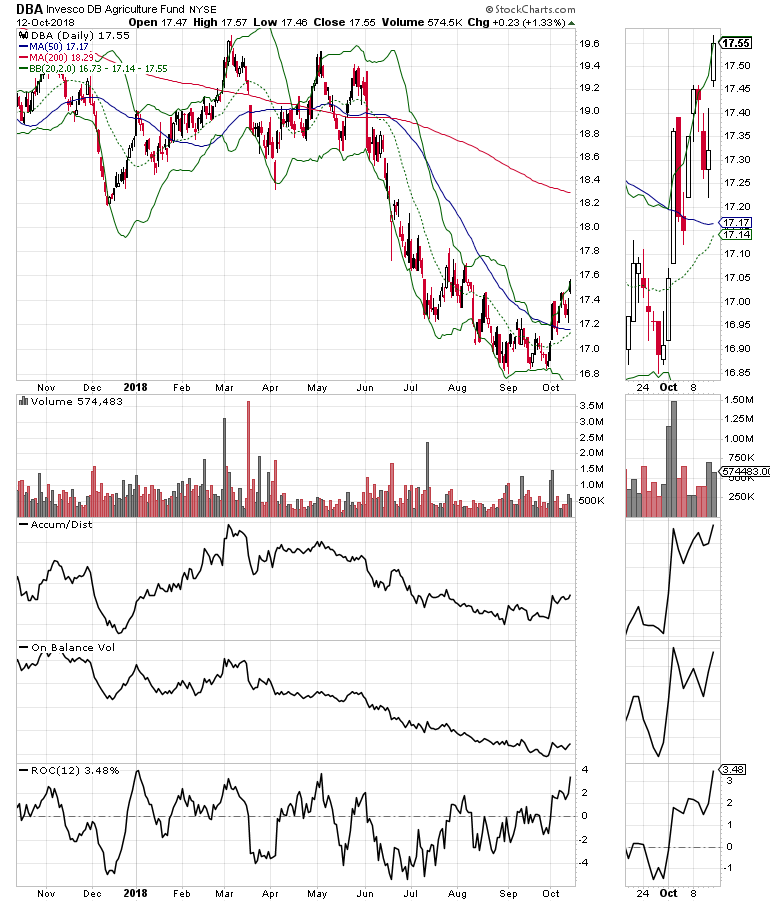 So where was the money going during the algo hurricane? Aside from going under mattresses, it seems as if a stealth depository of funds might have been the agricultural commodities.

Consider the action in the Invesco DB Agriculture ETF (DBA) which seems to have put in a credible bottom over the last few weeks and which is under some aggressive accumulation as documented by the Accumulation Distribution (ADI) and On Balance Volume (OBV) indicators.

As Wall Street worries about the future, commodity traders seem to be betting on something, perhaps a colder-than-expected winter, and are starting to pile into agricultural commodities. The agricultural stocks certainly held up better than the tech stocks last week. And this is not something new.

I’ve been bullish on Hormel (HRL) and Archer Daniels Midland (ADM) for some time and continue to hold those stocks, whose reasonable resilience during last week’s stock market carnage, coupled with the stealth assent in agricultural commodities, suggests that maybe something very different is on the way and the smart money is starting to build a long-term home there as they exit the FAANG stocks.

Disclosure: I own shares in HRL and ADM as of this writing.

Joe Duarte has been an active trader and widely recognized stock market analyst since 1987. He is author of Trading Options for Dummies, rated a TOP Options Book for 2018 by Benzinga.com - now in its third edition, The Everything Investing in your 20s and 30s and six other trading books.

To receive Joe’s exclusive stock, option, and ETF recommendations, in your mailbox every week visit https://joeduarteinthemoneyoptions.com/secure/order_email.asp.