The direction of the S&P 500 may depend on how it finishes off February, writes Al Brooks.

The E-mini S&P 500 futures rallied on the February bar of tis monthly chart (see below). It is now testing the top of its 10-year bull channel. There is currently a prominent tail on top with one week left to the month. That is a sign that traders see the channel as resistance.

Friday closed one tick above the January high. There is still a week left to the month. With the selloff on Thursday and Friday, it is more likely that February will close below the January high.

As I have said many times over the past few weeks, the E-mini S&P 500 is in a bull leg in a trading range on the daily chart. The range began around Christmas. The E-mini will probably trade down to at least the Feb. 10 low within a few weeks.

Support and resistance at the end of the month

What has that daily chart got to do with the monthly chart? Well, this coming week is the final week of the month. Traders will therefore look for the E-mini to gravitate to monthly support or resistance at the end of the week. This is especially true for the final hour of the week.

Currently, the most important magnet is the January high. If the bulls can get the month to close above that high, the odds of higher prices in March would be better. But if the bears can get February to close below the January high, traders will wonder if the rally is stalling. That would increase the chance of sideways trading in March.

Can February close down at the January low? Unlikely. That low is far below and there is only one week left to the month. But if the E-mini sells off strongly, February would have formed a micro double top with January. That would increase the chance of lower prices in March.

Last year was a huge bull bar on the yearly chart (not shown). It came late in a bull trend. It is therefore likely exhaustive. Traders should expect a neutral bar in 2020.

One example would be a bar with a smaller range and a close around the open. If this year is a doji bar on the yearly chart and it has a smaller range, the first two months might have covered most of the range for the year. Or, if the E-mini reverses down, the rally might be making the tail on the top of a doji bar or bear reversal bar.

I have said several times since December that 2020 might form a big trading range between 2900 and 3500. This is holding true. The E-mini is getting close to the top of that range. This tends to limit the upside from here.

The E-mini S&P 500 futures formed a bear reversal bar on its weekly chart after two big bull bars (see chart). Those two big bull bars came late in the bull trend that began in October. This is the second two-bar buy climax in the past six weeks. There are now consecutive buy climaxes, which increases the chance of a pullback. 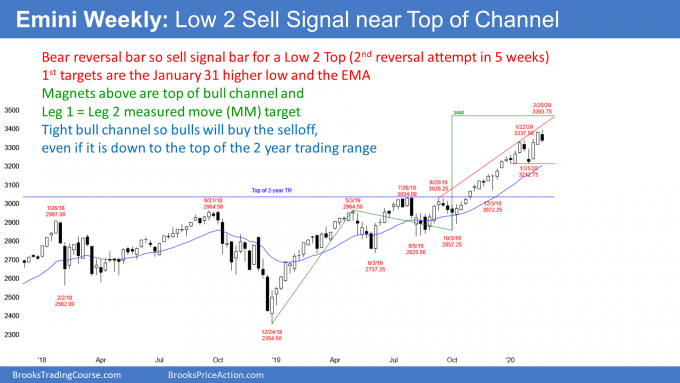 This past week is a sell signal bar for the coming week. There is now a Low 2 top at the top of the bull channel. This week should trade below last week’s low. That will trigger the weekly sell signal.

Because the context is good, there will probably be more sellers than buyers below the previous week’s low. This means that traders should expect lower prices over the next couple of weeks.

Whenever there is an usually big bull bar or a pair of reasonably strong bull bars coming late in a trend, the rally usually attracts profit takers. If enough bulls cover their positions (sell out of their longs), the E-mini could reverse down for several bars. If it does, the first magnets below are the 20-week exponential moving average and the bottom of that final bull breakout.

The rally to the Jan. 22 high is an example. I talked about this at the time and said that there would probably be a 5% pullback. The E-mini sold off 4% over the next two weeks.

There are again consecutive big bull bars and now a sell signal bar. There are some differences from the other two examples. The first is the strong sell signal bar this time. Also, it is a second reversal attempt, which has a higher probability of success.

However, the bulls have some hope as well. The 4% correction three weeks ago relieved some of the overbought condition. Traders sometimes think of the pullback as an opportunity for exhausted bulls to recover their energy during that selloff. That renewed energy makes them more willing to buy again.

Because there was a relief from some of the exhaustion after that selloff in late January, the bulls are theoretically less exhausted now. The bulls are less overextended. This reduces the chance of panic profit taking and a sharp reversal down.

However, the general idea is the same. Unusually strong bull bars late in a bull trend typically attract profit takers. Consequently, there is an increased chance of a pullback within the next few weeks. The bears now have a reliable setup. Traders should expect at least a couple weeks of sideways to down trading.

If there is a selloff, the first targets are the 20-week exponential moving average and the bottom of the most recent buy climax. That is the low of three weeks ago. The next support is the January low at the bottom of the two-month trading range.

What is the alternative to a selloff? It could be that last week was simply a pause in the rally from the January low. The bulls are hoping that the bull trend from the October low is resuming. They want this rally to reach the Leg 1 = Leg 2 measured move target at 3468. A couple closes far above the 3400 Big Round Number would shift the probability in favor of the bulls.

The next target would be the top of a broader bull channel on the weekly chart. That is currently around 3520.

The E-mini S&P 500 futures has rallied strongly in February on its daily chart (below). But the rally had three legs up in a tight bull channel. That made it a parabolic wedge. Since that is a type of buy climax, it often attracts profit takers. The bulls took some profits on Thursday and Friday. Will they take more? 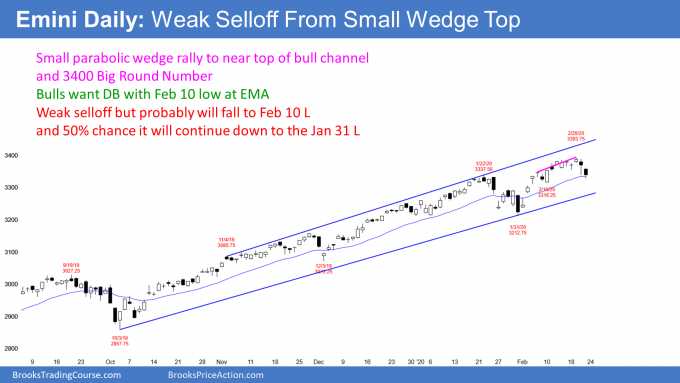 Traders are uncertain if the February rally is a resumption of the five-month bull trend or simply a bull leg in a trading range that began around Christmas. They should get information over the next couple weeks that will help them decide which is more likely. A trading range is a higher probability bet, especially after the strong selloffs on Thursday and Friday.

If the bulls get a couple closes above the 3400 Big Round Number, the odds will shift in favor of the bulls. Traders will be more inclined to think that the October to January bull trend is resuming.

They would then expect the rally to continue up to the top of the bull channel on the daily chart. That is currently around 3440. In addition, they would look for the rally to reach the 3468 Leg 1 = Leg 2 measured move target on the weekly chart.

The bears want a test of the January low

After the 4% correction in January, traders know that the bears can take control. Also, they are uncertain if the exhausted bulls fully recovered during the late January pullback. Are the bulls willing to buy aggressively at the high? Or, have they become more cautious? Are they now only willing to buy pullbacks?

The E-mini went up and down in January. It has broken above the January high, but it has gone sideways for two weeks. Last week was a doji bar on the weekly chart after two climactic bars.

These factors tend to limit the upside from here. Also, if the year is going to be in a trading range, there will probably be several smaller ranges within the yearlong range. Christmas is a reasonable candidate for the start of a range. The price action since then is consistent with this. The E-mini will probably be sideways to down over the next week and possibly down over the next month.

The downside targets are the bottom of the bull channel and especially the January low. There is currently a 50% chance that this selloff will continue down to that low by the end of March.

“This year will be great for traders and terrible for investors,” writes Al Brooks, but ...