Is it Time to Scale Back in Small Caps? 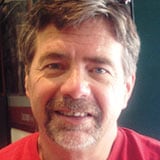 One sector that has treated us right is the small cap stocks, which we recommended towards the end of last year, asserts technical expert and market timer Jon Strebler, editor of Dow Theory Letters.

The original idea was: we’re in the third psychological stage of this bull market, a time when smaller and more speculative companies tend to shine.

We know that’s worked out well by the many times these funds, and the underlying S&P Small Cap index, have made new all-time highs. But are we pushing it by staying overweighted in this sector?

Maybe so. Here’s the S&P Small Cap index compared to the Dow Industrials — the definitive large-cap measure if there ever was one. It’s a fascinating weekly chart. It acts like an oscillator, bouncing between about .0365 and .0430, with peaks and bottoms spaced out fairly evenly.

Over the last three years, there have been four peaks, with an average distance between them of about 16 months. The trend of this ratio is still up (blue line); however, the lower MACD indicator looks to be rolling over. 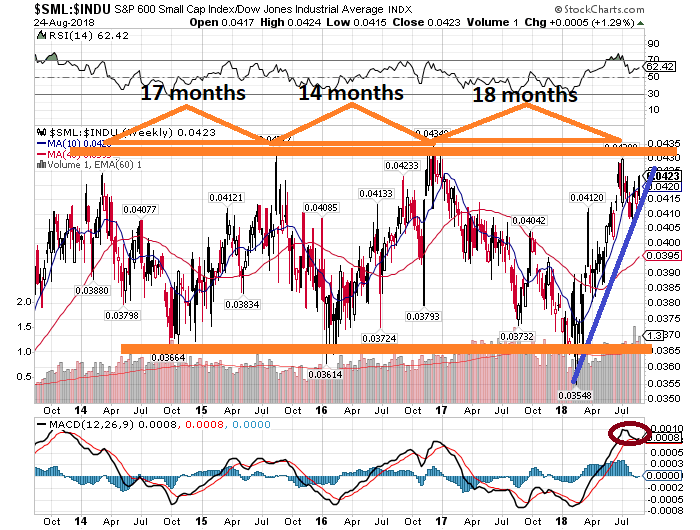 The obvious conclusion from this chart is that the S&P Small Cap index and the small caps have run their course compared to large caps, and maybe we should take the money and run. That’s probably not a bad decision for our conservative subscribers; we made some nice profits in small caps — time to shift that money back into the general market.

On the other hand, with new highs across the board — excepting the Industrials — a powerful final leg up in this aged bull market is more than just a long shot. In such a final move, the small caps could be expected to lead the charge.

So there it is: If you’re conservative, and/or worried about a Dow Theory non-confirmation, then move out of the small caps. But if you’re a more aggressive investor, and/or you like this bull market’s odds, then stay with your small caps. Me, Mr. Compromise — I’m selling half of my holdings in Vanguard Small-Cap Value and iShares S&P SmallCap 600.