The economy is seeing the perfect confluence of factors to make Q2 growth as high as possible. We have the tax cuts, energy prices rising, and government spending increasing, writes Don Kaufman.

America is growing faster than most other advanced economies which means capital can flow here since U.S. stocks have higher earnings growth. The data points we’ll review in this article are spectacular, giving credence to the possibility that this may be peak growth.

Since oil prices are helping retail sales and industrial production, the OPEC meeting June 22 will be pivotal to determine if high growth continues. Furthermore, the price of oil and commodity inflation affect the Treasury yields, either flattening or steepening the curve. Once the OPEC decision is made, I think the market can go into cruise control, potentially breaching record highs and continuing upwards.

The headline index was 107.8 which was higher than the highest estimate in the consensus range which was 106.4. Last month, the report was 104.8 which is also great. This May report was the second highest reading in the 45-year history of this survey. The table below shows the parts of the survey. As you can see, 8 out of 10 were up. 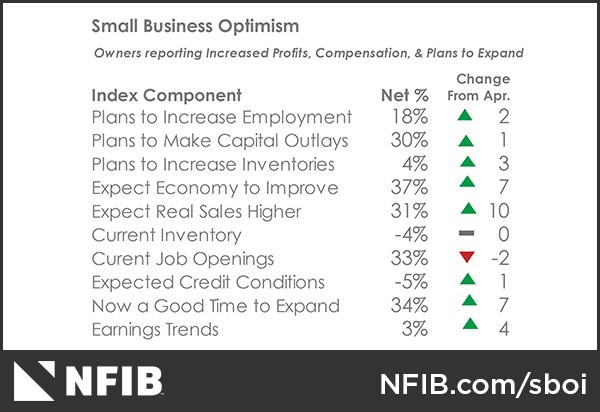 The Fed thinks long-run GDP growth will be 1.8%. The growth rate most often cited is the quarter over quarter seasonally adjusted growth rate. It’s safe to say that if the quarter over quarter growth is above 4%, the annual rate will be well above 1.8%. I can almost guarantee that most small businesses aren’t looking at the yield curve. I’m not saying that the curve can’t stay at this current level for a few quarters or years, but with the recent Fed guidance, it looks like an inversion will occur soon.

Speaking of Fed policy, small businesses have the highest expectation for inflation pressures in 10 years. This is one reason why the Fed is becoming more hawkish even though the CPI and PCE reports aren’t signaling a similar sized spike.

Don’t let the fact that the current job openings index fell 2 points fool you. The labor market is very tight, according to this report. The index which measures the concerns about labor quality is at the second-highest level in the 45-year history of this survey. And, 58% said they were hiring or trying to hire, while 83% of those firms said there were few or no qualified applicants for the position they were looking to fill.

The labor compensation index was up 2 points to 35 which was the highest in the history of the report. Small business earnings were up 4 points to 3 which is the highest ever.

The CPI report met expectations across the board, but the PPI-Final Demand report on Wednesday beat estimates, confirming the Fed’s hawkishness. The month over month headline PPI was up 0.5% which beat the consensus for 0.3% growth.

The year over year headline growth seen in the chart below was 3.1% which was a 0.5% acceleration from last month. Producer prices lead consumer prices since they are earlier in the pipeline, meaning this is disconcerting.

The Fed is already in trouble because the yield curve will probably invert in the next few months. If inflation picks up, the Fed might need to hike rates quicker which will send the economy into a recession. I haven’t been supporting that narrative, but this PPI report pushes me in that direction.

PPI excluding food, energy, and trade services, was up 0.1% which missed the consensus by one-tenth. Trade services were up 0.9%, explaining that result. The index was up 2.6% year over year which was higher than last month by one-tenth.

Prices for steel mill products were up 4.3% month over month which is on top of the 3.2% increase in April.

Aluminum prices were up 5% after they were up 1.8% in the previous month.

Clearly, the tariffs are influencing prices.

Consumer prices were only up 1% which explains the much slower CPI increase than what has been seen in the PPI and Import & Export prices report.

Import prices from Canada were up 8.1% year over year which is interesting considering the trade negotiations between the countries currently underway.

Chinese import prices were only up 0.3% year over which will help moderate the high trade deficit America has with the country.