What Traders Should Know about Core Inflation, Consumer Prices & Wages

We never know for sure why markets move. The only way to know would be to interview every trader who was involved in the market. We can only make educated guesses on why markets move, writes Don Kaufman Saturday.

After the PPI report showed disappointing inflation stats, I expected the July CPI report to be weak as well. Instead it was mostly in line with expectations. The headlines on this report were particularly overzealous.

The headlines blared core inflation is the highest in 10 years. That’s technically true as it was the highest since September 2008, but it’s meaningless as I will review.

Core inflation was up 0.2% which met estimates and was the same as June. The only reading which beat estimates was year over year core inflation which was 2.4% instead of 2.3%. It was 2.3% last month.

The reason I think this beat is meaningless is because it is mostly about rounding. Core CPI was up 2.354% which means it beat estimates by only half of one basis point. 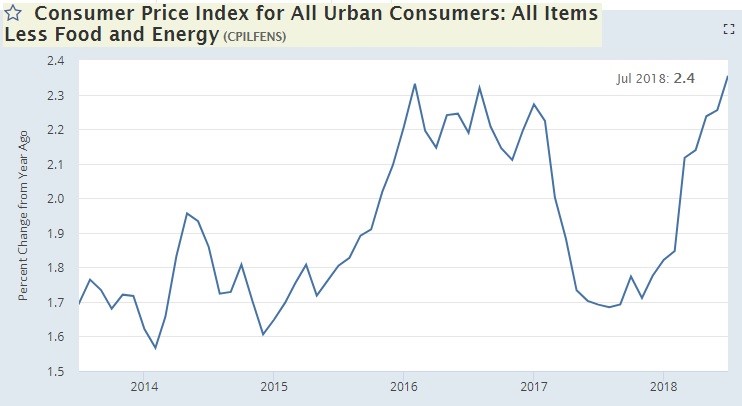 Inflation is being overhyped now because the business cycle is nine years old. Inflation is supposed to increase at the end of the cycle.

However, looking at the two-year comp shows this is much to do about nothing. Inflation hasn’t been able to sustain itself above 2% this cycle in either the core CPI or core PCE. It’s still a problem that real wages are negative when compared to inflation, but I think that’s more of a problem with weakness in nominal wage growth.

When the year over year inflation comparisons get tougher, we will probably get back to seeing positive real wage growth.

The specifics of the CPI report

Shelter drove 60% of this increase as it was up 0.3% month over month and 3.5% year over year. Housing prices were up 0.2% month over month. It’s interesting to see this coinciding with weakness in the housing market. Unsurprisingly, when housing prices grow faster than incomes, the demand for housing falls.

There are many economists fearmongering about the potential for another crash like 2008.

I wouldn’t be worried about such a decline outside of the speculative areas like Seattle and San Francisco. Normally, you’d expect people to shift from buying to renting if homes cost too much money in relation to incomes. However, owner’s equivalent rent was up 0.3% month over month, so there’s no respite from increasing home costs.

Food and beverage prices were up 0.1% month over month. There hasn’t been much food inflation in a while. This lowers headline inflation in relation to core inflation.

It’s interesting how the headlines framed this report as hurting wages. It certainly doesn’t help them, but the headline inflation is used in the real wage calculation, not core inflation, which means there wasn’t a change in the inflation part of the calculation compared to last month. On a non-seasonally adjusted basis, average hourly earnings growth fell about 7 basis points in July, so real wages were still negative.

Even though the core CPI headlines were spooky enough to make you think more rate hikes will occur, the Fed funds futures market now expects less of a chance there will be two more hikes this year. There is a 62.2% chance of at least two more hikes in 2018 which is about 9% less than Thursday. This decline occurred because it was a risk off day in the market.

This shows me that the CPI report was meaningless. The market agrees with my analysis and disagrees with the headlines which make it seem like a new era of high inflation is here.