At the moment, China and other factors are weighing on business CapEx plans and that’s part of the sluggishness I’ve referred to holding things a bit more in limbo. Jabil Circuits (JBL) and Intel (INTC) are two current examples, writes Gene Inger Tuesday.

It doesn’t mean a recession is automatically upon us at the same time it could mean that if trade hostility worsens, and then we find midterm elections throttling expectations for growth.

These points are not intended to convey any political bias, just to assess how the markets would respond to the key catalysts of the moment: trade and midterms. Meanwhile the technical picture of charts hasn’t changed a lot as we remain extended but with a lack of investor conviction either to buy more or to aggressively sell either.

In-sum: Many companies (especially technology) are reticent to give more or less favorable outlooks for the next year or two primarily because of the trade/tariff uncertainties we’ve discussed.

Jabil Circuits (JBL) today was one of such companies that can’t contemplate higher margins pending all this. I’d think Intel (INTC) has a similar concern especially given that globally iPhones and Intel-powered computers are not particularly on the ascent these days.

Of course, I liked Intel around $30-$31 and did not agree with those buying it a bit above $50 after the move had already been made. Similar sentiment for so many otherwise-fine companies that simply got ahead of themselves. 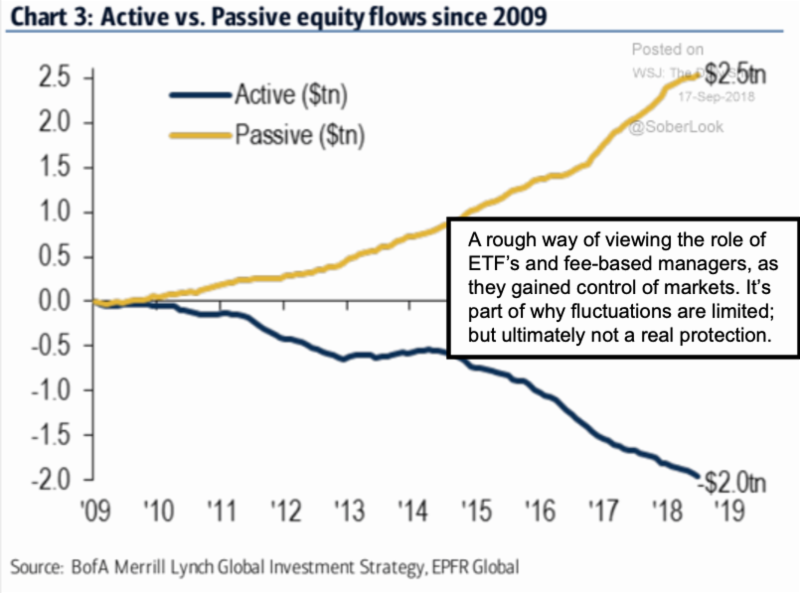 And yes, that means I don’t embrace the assumptions trotted-out saying it will be 3-5 more years of uninterrupted compounded (similar) growth rates.

I think that’s almost ludicrous to expect, without a consolidation in earnings and/or revenue. Because yes, the tax cuts help earnings and are unrelated to revenue academically and with the realization buybacks also artificially get investors excited. In reality it just reduces floating share supply and thus makes numbers look better and helps executive compensation too.

Bottom-line: Sticking to the facts, we have a stagnant high-level market. In this environment we certainly view it as conflicted given trade and tariffs, as a concern and additionally the specter of hard-fought midterms. These will have an impact on economic policy ahead and impact everything from consumer spending, to tax planning, to CapEx by companies.

Hence there is every reason for markets to really focus on what happens with these known unknowns. It creates a paucity of buyers or willingness to chase equities especially as the credit markets snug-up concurrently. I suspect the Fed will address this Wednesday as well and mention trade and other variable uncertainties looking forward.