The Trend is the Best Current Strategy

When markets become disruptive traders should use caution (tight stops) and stick with the trend, advises Joe Duarte.

For better or for worse the world now moves in directions which are directly dependent on the interactions between the financial markets, the economy and real life. And this highly complex system is clearly at a crossroads, a fact highlighted by tight trading patterns everywhere and hosts of people making life changing decisions based on financial events and their effects on their daily lives.

Furthermore, this now well entrenched dynamic is about to move decisively as investors await the markets’ response to events related to the Federal Reserve, the U.S.-China trade war and the fact that U.S. economic data suggests a slowing in activity is under way.

Certainly, the resumption of trade talks between the U.S. and China should have a calming effect on the stock market, the economy and life in general, at least in the short term. But of course, the devil is in the details, and much still depends on what the Fed actually does in July and how the initial pledges exchanged between the U.S. and China proceed over the next few weeks.

In addition, the bond market has already priced in a recession as yields hover near the recent cycle lows. Thus, if there is a reversal in bonds and market interest rates rise, the Fed could be in a huge pickle. In other words, they may have to lower rates, perhaps aggressively, if the weakening trend in recent PMI data, Fed regional surveys, consumer confidence data, and business confidence numbers continues. Therefore, the real question for all involved is what the Fed does if the economy is tanking but the bond market is beating to its own drum and market rates are rising.

What Came First - The Chicken or the Egg?

Somewhere in the middle of the data, the markets and the politics is this often overlooked truth, which is that economic activity is largely influenced by psychology. And at this moment, aside from the obvious structural problems in the world –seismic demographic shifts, decades of off-shoring of U.S. jobs, the results of terrible fiscal and foreign policy since the 1960s, and too much dependency on the Fed to boost the economy - people are just plain scared. And a big portion of the fear stems from the wild and wooly politics of the moment along with the possibility that no matter who gets elected in 2020, life as they know it may never be what it once was.

What we are witnessing is the old chicken and egg effect as businesses and the general population both wonder what came first; the current economic situation resulting from structural economic factors or the fear of what the general situation in the world is doing to the economy.

The question is clearly rhetorical, but the practical response is tangible as people are keeping their wallets closed and are unlikely to open them until there is some assurance that general conditions are stable enough to do so. This very basic human response to uncertainty has set up a vicious cycle with the net effect being that consumers are pulling back, which in turn is causing businesses to pull back, resulting in a slowing economy.

Because we are now living in a world where the economy, the financial markets and daily life are one continuous entity – the Market-Economy-Life complex - events tend to occur and develop in a fashion similar to a chain reaction.

This synchronous motion in the Market-Economy-Life complex is highly influenced by the relationship between the stock and bond markets, the economy and their direct effects on the main instruments of wealth for the masses: the value of their home, the home equity line of credit (HELOC) and the 401-K plan. Therefore, as the markets move, people’s wealth changes along with them prompting personal responses which when aggregated into a critical mass create a scenario where events, reactions, and outcomes are seamlessly intertwined into complex and often volatile trends– total interconnectedness.

Furthermore, this total interconnectedness effect is magnified and transmitted at the speed of light via the interaction between the algorithm-fueled markets, the 24 hour news cycle, social media, editorials and the constant connection of the public to information via mobile devices.

The upshot is that from a trading standpoint, this new and evolving dynamic has created a constant wall of worry which continues to fuel the bumpy, often frightening and generally bullish rise in the stock market, which could well surprise the majority of traders by once again making new highs.

The fear in the economy is starting to rise but the New York Stock Exchange Advance Decline line (NYAD) made a new high to close the week of June 28. And since this has been the most accurate indicator of the market’s trend since the 2016 presidential election, the bulls ended the week on top and the odds favor a continuation of the stock rally.

This, of course, could change rapidly depending on what the market makes out of the recent talks in Osaka between the U.S. and China and what transpires from now until the Fed meets in July. 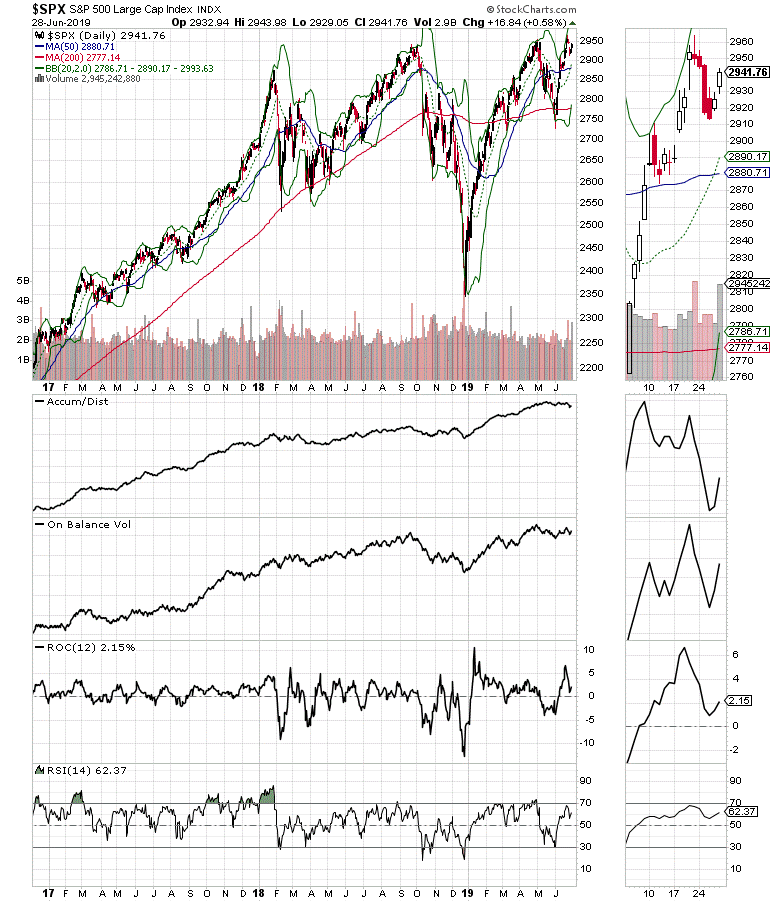 Neither the S&P 500 nor the Nasdaq 100 indexes confirmed the new high in NYAD, but both indexes remain within reach of such a high so there is no major divergence here. 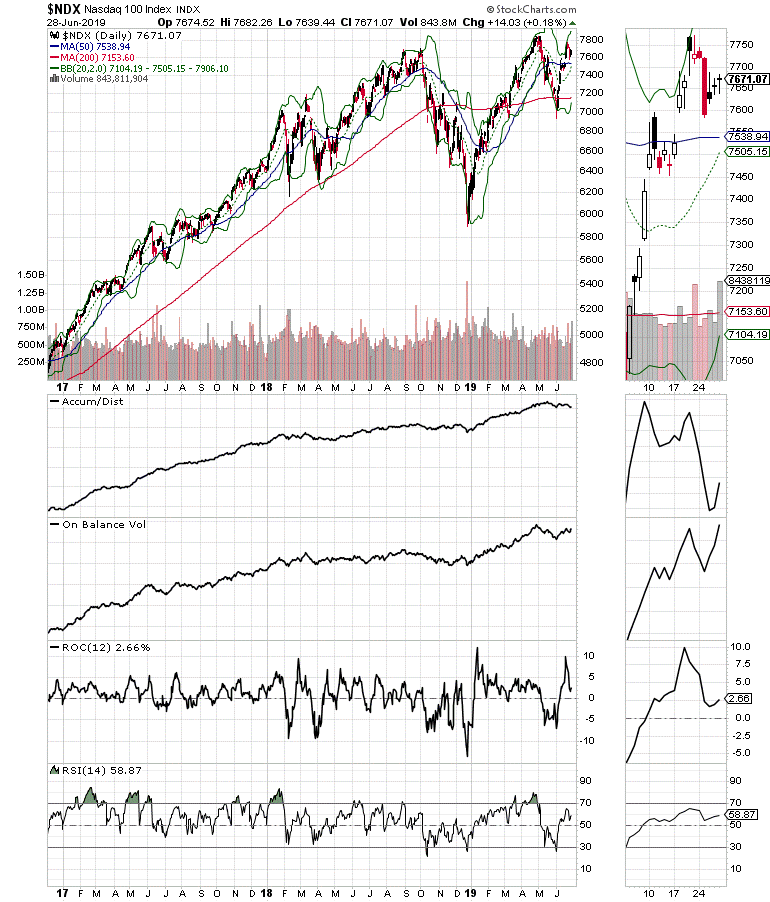 The most telling chart of the week was that of the U.S. Ten Year Treasury note Yield (TNX), which closed the week just above 2% as bond traders wait for what happens over the weekend in Osaka between Trump and Xi. 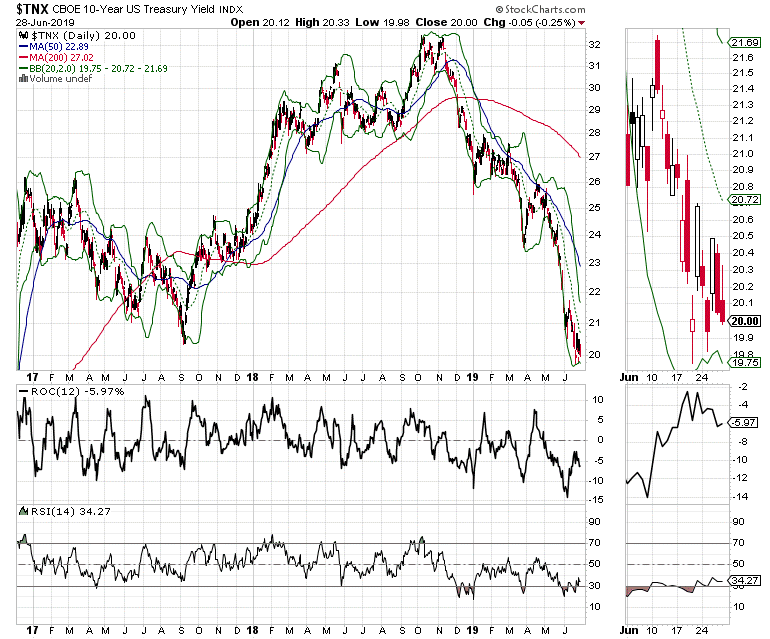 Thus, if bonds hold steady, it is more likely that the stock market will respond favorably to the pausing of hostilities between the U.S. and China.
Stay with the Trend for Now

The evolution of the Market-Economy-Life complex and Total Interconnectedness is likely to be a major macro influence on the markets for many years. And although it may seem counterintuitive in a volatile market, the most profitable action any investor can take at the moment is to trade with the general trend in the stock market based on the actions of the New York Stock Exchange Advance Decline line, aided by the general principles of sound money management.

The five pillars of this approach include:

Picking stocks in this market has not been easy, which is why cutting losses early is crucial. On the other hand, owning stocks has certainly been rewarding when a good pick comes together, and it moves higher for an extended period.

Some stocks that have adhered to this pattern include Medtronic PLC (MDT), Texas Instruments Inc. (TXN), Broadridge Financial Solutions Inc. (BR), Leidos Holdings Inc. (LDOS), and Flowers Foods Inc. (FLO), which are still in our portfolio. Meanwhile there are others that are emerging from long term bases which share similar characteristics to those four winners. One of them, which I’ve recently added is Cirrus Logic Inc. (CRUS), a semiconductor stock which should benefit from any good news in the U.S.-China trade war. You can have a free look at my current portfolio recommendations by clicking on the link below.

I own MDT, TXN, BR, LDOS, CRUS and FLO as of this writing.