As the equity markets have become frothy here near all-time highs, many market analysts are recommending defensive plays such as real estate investment trusts (REIT).

Our analysis has uncovered a strong REIT play. Now could be the time to buy calls on REIT Prologis Inc. (PLD), according to Schaeffer's Senior Quantitative Analyst Rocky White. The stock is pulling back to support at its 50-day moving average after a prolonged stretch above this trendline, which has yielded bullish returns for PLD over the past three years (see chart). 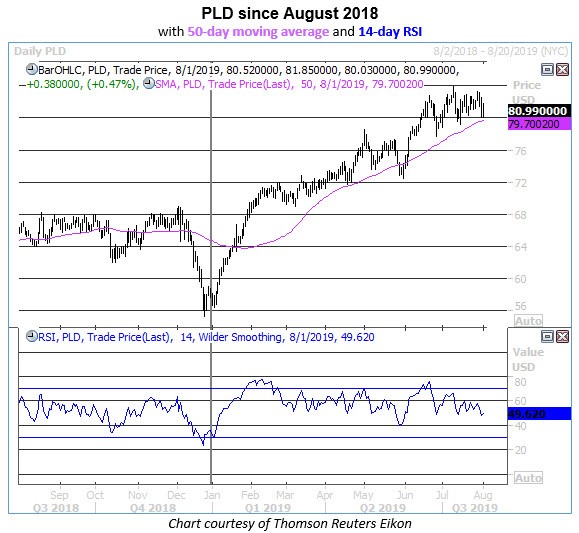 Following the equity's past eight pullbacks to its 50-day trendline, its average 10-day return has been a fairly unremarkable 3.37%, with 75% of returns positive. However, based on that fairly tepid average bounce following a PLD pullback to its 50-day moving average, White's model shows that an at-the-money call would deliver 123% profits in 10 days — more than double the initial investment, and providing massive leverage relative to the expected stock move.

This projected profit assumes that front-month PLD option implied volatilities remain around their historical two-year average of 19.8% over the next couple of weeks. However, that 20% range is actually on the low end for Prologis shares anymore, per its Schaeffer's Volatility Index (SVI) of 20%, which registers in the low 26th percentile of its 52-week range. If this metric drifts back up toward its annual midpoint over the next few weeks until expiration, it will carry August-dated option prices with it.

In addition to the equity's meet-up with reliable trendline support at its rising 50-day moving average, PLD is also perched atop the round $80 region, which has been a key floor since mid-June, and which roughly coincides with a round 20% year-over-year return at the moment. However, the stock is no longer overbought like it was when it clambered atop $80 earlier this summer, as evidenced by its middling Relative Strength Index (RSI) of just below 50.

Meanwhile, short sellers are on the run. Short interest on PLD dropped by 5.9% in the past two reporting periods, and now totals just 6.75 million shares. However, short interest could still fall by another 20% from current levels before reaching its early March low, which means the REIT name stands to benefit from a continued short-covering trend in the immediate days and weeks ahead.

With the REIT fresh off its earnings report, front-month option implied volatility on the low side, and a bullish technical buy signal flashing for the stock, now looks like an ideal time for opportunistic bulls to buy short-term calls on PLD.

MGM Growth Properties LLC (MGP) was spun out in 2016 by MGM Resorts International (MGM); the initial...