Despite broad weakness in China-related equities, YUMC has managed to outperform peers and is sitting at a strong technical launching pad, reports Elizabeth Harrow.

Yum China (YUMC), the parent of such familiar fast-food chains as KFC, Taco Bell and Pizza Hut, popped higher in the session immediately following its late-July earnings report. By the end of July, it was sitting on a robust year-to-date gain of more than 35%, completely erasing the 33.5% loss that YUMC shares racked up in 2018. The stock has since pulled back from its immediate post-earnings high, but its mid-August lows were effectively contained by the $41.50 level, which marked the site of a May bear gap, as well as its 160-day moving average.

Throughout the second half of 2018, the 160-day moving average trendline for YUMC repeatedly thwarted rally attempts, establishing itself as a stiff level of resistance. But since this trendline was taken out in late January, it appears to have switched roles. The 160-day moving average has caught several pullbacks over the past three months, with each test of this level preceding a sharp bounce in the stock (see chart). 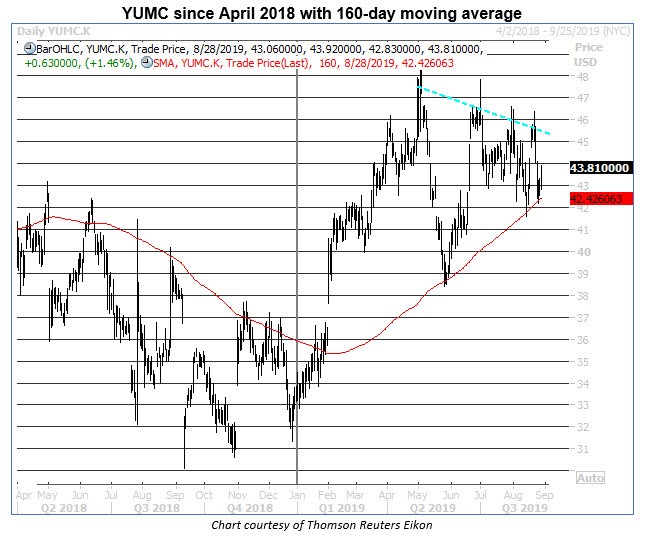 To put a finer point on this pattern, Schaeffer's Senior Quantitative Analyst Rocky White reports that YUMC has pulled back to test support at its 160-day moving average in this manner five times over the last three years, with the latest test occurring on Friday, Aug. 23, when the equity closed within one standard deviation of the trendline. Looking at the returns after the last four signals, YUMC was trading higher one month later 75% of the time, with an average 21-day return of 9.73%.

Based on Friday's closing price, an average bounce from that level would put YUMC shares at $46.71 by this time next month. Such a move would carry the stock above its August high and potentially spark a more prolonged rally beyond the trendline connecting its lower highs this year.

A capitulation by short sellers could help fuel YUMC's latest bounce from 160-day support. Short interest rose by nearly 34% in the past two reporting periods, despite the equity's positive price trend, and some of the weaker bearish hands could soon be feeling the heat from their losing positions.

Meanwhile, with no earnings reports on the immediate horizon, now is an ideal time to bet on YUMC's next leg higher via call options. The equity's Schaeffer's Volatility Index (SVI) is 32%, which registers in the 25th percentile of its annual range — indicating front-month options have been cheaper, from an implied volatility standpoint, only one-quarter of the time during the past year.