The stock market may continue to make higher highs on a regular basis as long the Federal Reserve continues to pump money into the Repo markets. But, this rally can’t and won’t last forever, especially if the U.S. economy does not pick up speed, corporate earnings don’t dazzle, and if the bond market decides to sell off and kill the housing rally.

The market is so overbought that a long overdue pullback or hopefully a sideways consolidation that lasts for several weeks could be on its way, and soon. That said, an actual decline, if one indeed materializes is likely to at least initially be in the range of 3% to 7% before the dip buyers come back to refill their tanks.

One of these two scenarios is most likely as long as the Federal Reserve doesn’t act too aggressively in reducing the liquidity in the system (or more accurately, stops it aggressive purchases in the repo market). Of course, if the Fed decides to drain reserves, and/or the bond market decides to take yields decidedly higher, then all bets are off since easy money and low interest rates are the primary reason for the rally in stocks over the last decade.

We live in a new mechanical world of stock trading these days, one fueled by artificial intelligence algorithmic robots whose only job is to follow the instructions of their underlying programs and to trade accordingly. This mechanical trading also extends to asset allocation models by so called quants – technical based futures traders, order filling at the exchanges for every single trade, and to the speed with which trades get executed by high frequency traders (HFT) who are waiting for every trade as it makes its way to the matching engine.

What this means is that if news and Federal Reserve action is agreeable to the programs, the odds of stock prices moving higher remain favorable. Furthermore, because robots know no limits beyond their programs, the odds that any move or up down in any market could go beyond the limits of human imagination are high, which is why the market keeps rising and human traders are increasingly fretful. The fact is that we simply don’t know what the bots will do.

Unfortunately, the problem with all or nothing mechanical trading is that when the news is deemed negative by the algos, such as when the Fed decides to drain liquidity from the Repo markets, the likelihood of a stock market decline of major significance will be well above average. This is because when the programs reverse course, it will be all about making money for the HFT firms on the downside if the programs deem it so.

Despite the nervousness of the moment there may be a silver lining. For one it’s helpful that the market seems to be using the overnight futures trading action as a place where temporary pullbacks in the indexes occur, while the trading patterns in some stocks remains normal with rallies, pullbacks and/or consolidations taking place in traditional fashion. These two factors have helped to prolong the rally.

Moreover, there is always the possibility that the U.S.-China trade pact and the recently passed U.S-Canada-Mexico trade act will deliver unexpected and faster than expected good news for the economy. There is also the plausibility that the Trump impeachment won’t turn into a true constitutional crisis and the U.S. won’t fall into some sort of chaotic geopolitical situation if things get beyond repair.
My only point is that we are reaching a point where the Markets-Economy-Life ecosystem (MEL) is reaching a big decision point and that whatever happens in the next few days to weeks will have wide ranging repercussions well beyond Wall Street. And since MEL functions as a single unit, what happens on Wall Street will affect the 401 (k) plan, the Home Equity Line of Credit, and the plans people make regarding big purchases such as homes and cars. Thus, just as markets have climbed and home buying activity has increased and the economy has done well as the Fed injected liquidity into the Repo market, things will likely reverse when they stop the printing presses.

As a result, this is a good time to evaluate each individual position one owns and to truly ask whether it is worth owning. It also makes sense to consider adequate exit points in case things get ugly in a hurry.

If the market corrects investors will be looking for places to hide. One place we recently highlighted is the pharmaceutical sector, which appears ready to spike. Look for are report tomorrow where we will give a specific recommendation in the sector. Hint below.

The New York Stock Exchange Advance Decline line (NYAD) continues to make new highs, therefore the trend remains up. That said, the signs of wear and tear on the rally are piling up. 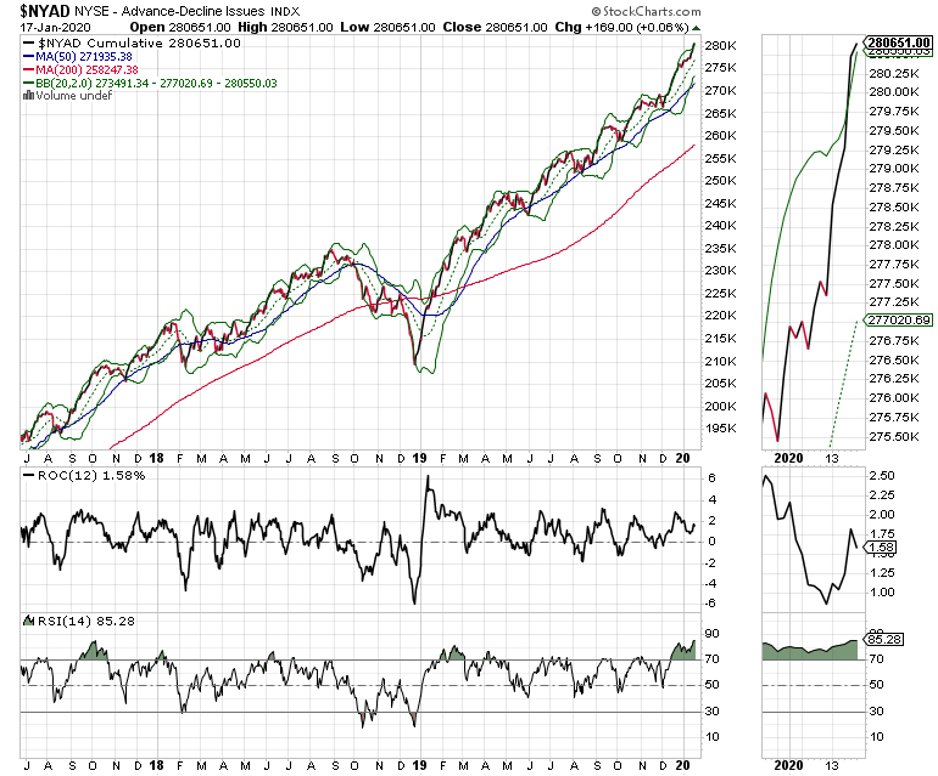 What this means is that the market is getting tired and that at best a consolidation is near and that at worst a real meaningful correction is coming.

The S&P 500 (SPX) and the Nasdaq 100 (NDX) indexes both made a series of new highs last week confirming the generally bullish advance in the NYAD. 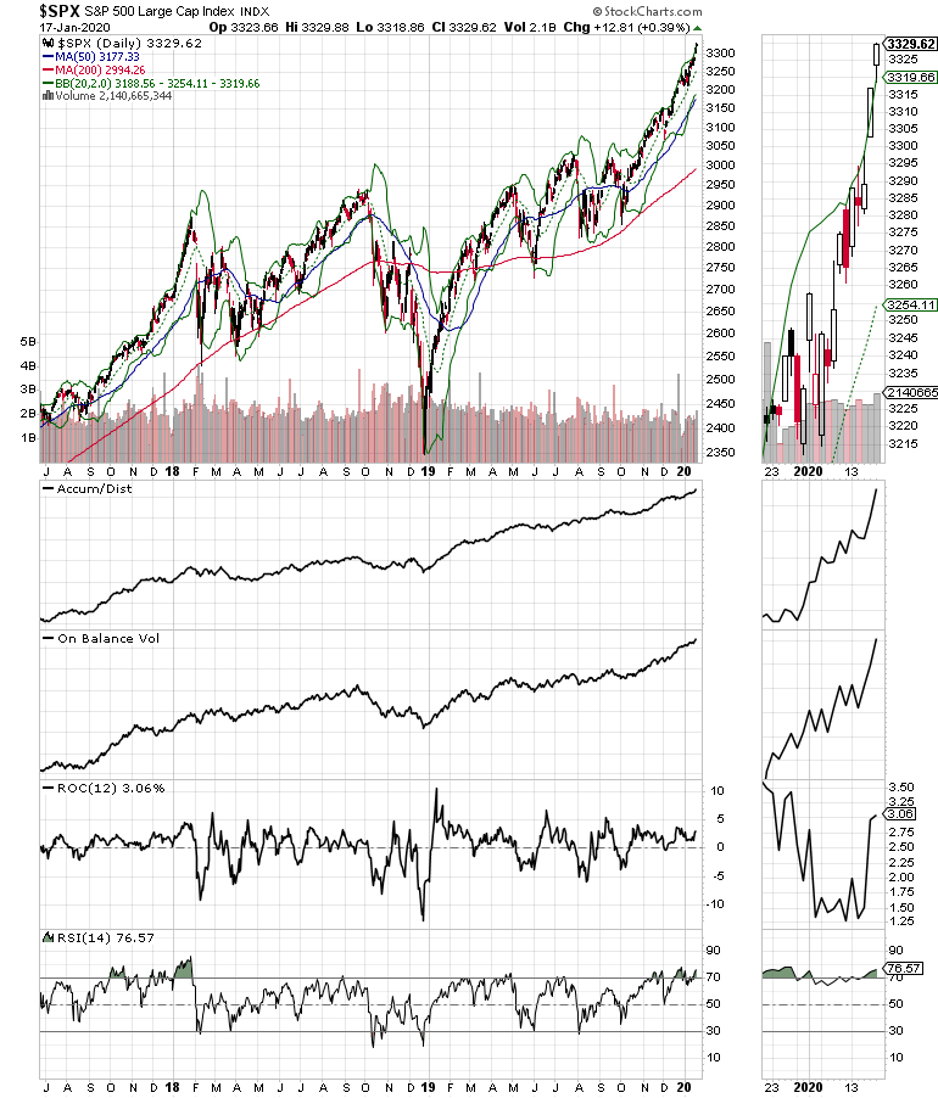 If there is a pullback in the markets, the first tier should be in the range of 2% to 3% with the 20-day moving average for the indexes being the first support point to be tested. 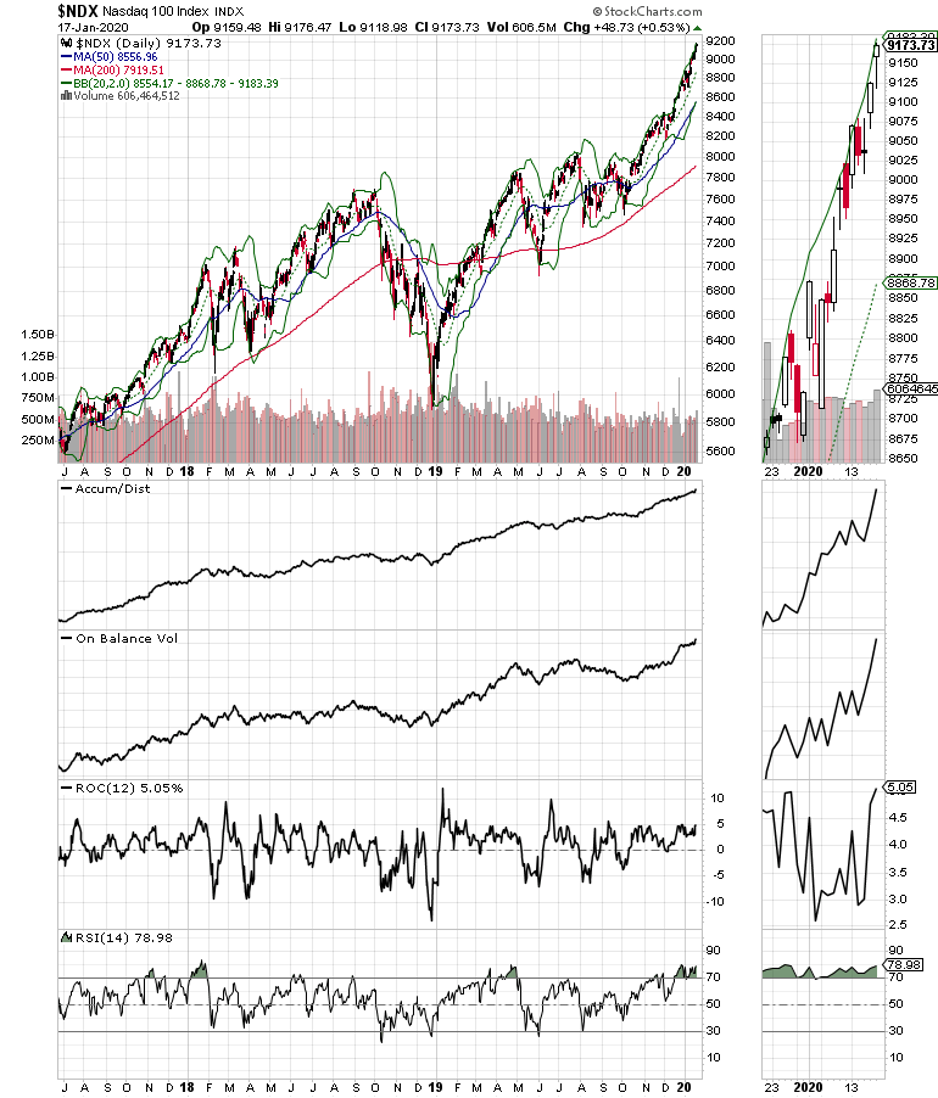 If the 20-day MA gives way, then a more substantial move toward the 50-day moving average in the range of 5% to 7% is likely. That would likely be enough to take the sails out the rally and perhaps provide another opportunity to enter the market, assuming the Federal Reserve or the economy don’t roll over.

Finally, the bond market is once again getting a bit skittish with U.S. Ten Year note yield (TNX) once again trying to move toward 1.9% to 2%. If TNX can get above that key resistance area, it will likely sink the housing stocks and the interest rate sensitive and dividend paying stocks (see chart). 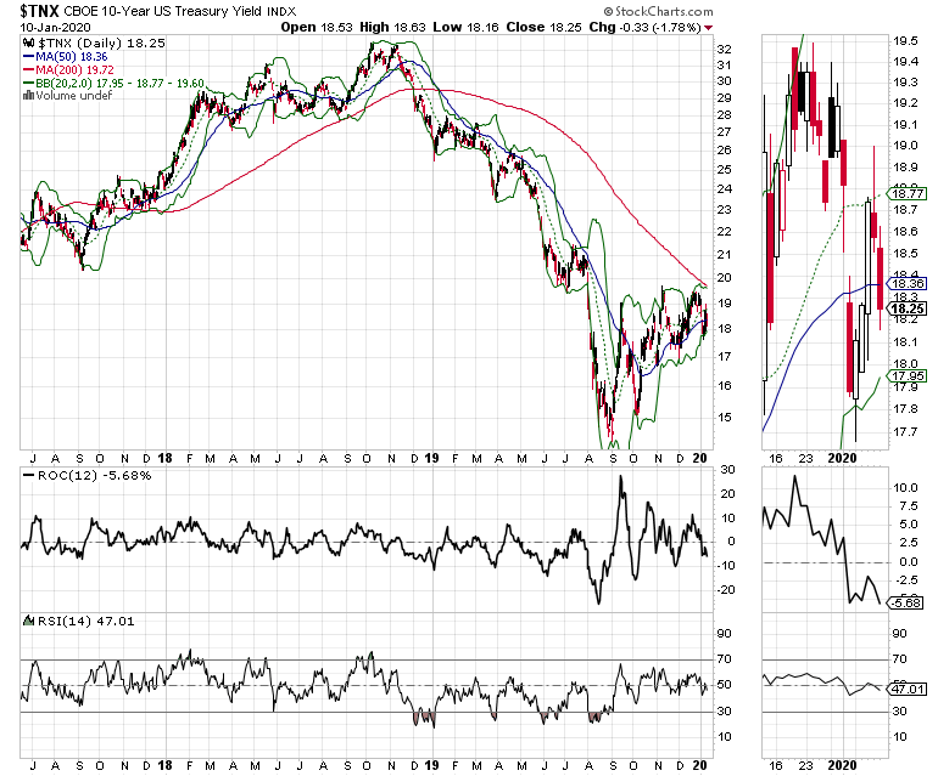 Odds of Market Crash Are Moderate

I am not expecting a market crash, although one is always possible after a 10-year plus bull market. More likely, I’m expecting a pause of 3% to 7% in the near term or perhaps a multi-week sideways trading range market. Much depends on earnings, the economy, and whether people continue to open their wallets to buy big ticket items that require financing, such as cars and homes.

That said, with the speed with which selling can develop when robots act, even a moderate pullback could be scary, which means that it’s better not to have a huge exposure to stocks when the big selling starts. Thus, a bit of profit taking along with exploring whether hedging makes sense is not a bad strategy to explore as February gets closer.

I own GSK as of this writing

Four Stocks to Watch in the Coronavirus Era
11 hours ago

The Coronavirus will impact many portfolios as well as lives, here are four companies working on a s...

With markets taking it on the chin, Joe Duarte has a sweet alternative that could climb the wall of ...