Can Fed Fight off Coronavirus?

Will the Fed act to protect markets, and more importantly, will it have any impact, asks Joe Duarte.

It’s time to take a deep breath, as the battle between central banks and the Coronavirus is just beginning. Meanwhile investors who recently raised cash as I have been suggesting for the past several weeks, and who develop a carefully crafted plan for up and down markets, as I describe below, will have a much better chance to survive and to trade another day.

Don’t be fooled. Stocks are still in the Chaos Zone, that operational area of complex adaptive systems where unpredictability rules. I described this phenomenon in detail in my Orlando Money Show presentation: “Trading at the Edge of Chaos,” and I highly recommend viewing it, due to its applicability to the current markets.

Hail Mary: The Battle between the Fed and the Coronavirus

Of course, the Coronavirus, chaos personified, is a big unknown and the cost in human lives and economic activity remains difficult to ascertain, especially as it seems to be spreading globally in a similar fashion to what happened in China. Thus, it is ludicrous to expect that easy money can cure a gargantuan threat to global health or that anyone can know when and how this will all end. Furthermore, if it follows the same timeline, we could be at this phase of the viral spread for at least two to three more months as the world catches up to China.

But just for a moment let’s look at what the market wants, whether right or wrong and whether it will work or not, which is more liquidity. This is especially important since the Federal Reserve’s recent reduction of its repo market cash infusions via bond and T-Bill purchases fell from “at least $100 billion” installments to “at least $25 billion” over the last week. This reduction in liquidity (or me precisely, reduction in the amount of additional liquidity injected from the Fed) couldn’t have come at a worse time and was clearly a factor that exacerbated the already shaky markets.

The Fed is again in a box, and they still have work to do. Fed Chair Powell’s statement noting the Fed would “use its tools and act as appropriate to support the economy,” released on Friday Feb. 28 was too general. In other words, if the Fed wants to be as effective as possible – never mind whether it can make a difference at this time - it should fully communicate its intentions in detail quickly and put them into action. Even if the Fed intervenes further, its actions may not be enough. But at the moment, having more liquidity is likely better than having less liquidity.

The market was extremely oversold and bearish sentiment was reaching a nearly absurd point; thus, Powell’s statement was well-timed, and the market rallied for the remainder of Friday’s trade and had its single greatest point increase on Monday. Whether the rally continues or can be attributed to the Fed is unknown. Still it shows that the Fed is aware that if they don’t do something, the current Markets, the Economy, and Life (MEL) ecosystem (people’s financial decisions) may feel the full effects of the stock market’s drop in the not too distant future.

This would be due to the nearly certain losses now being registered at the heart of MEL, the 401 (k) plan, which certainly may be reversed by the end of March when the quarterly statements will be reviewed by the masses if the Fed acts aggressively and the markets respond. On the other hand if the Fed’s Hail Mary statement fails and there is no meaningful reversal in stocks, the odds favor a very negative reaction in the Life component of MEL, as the negative wealth effect brought on by 401 (k) plan losses could well translate into a significant slowing in the economy as people decide to hang on to their money.

Taking the Bull by the Horns

There are no guarantees that what we saw in the markets near the close on Friday was the proverbial bottom. But it was better than the alternative, another 1000 point down day for the Dow Industrials.
Accordingly, investors who wish to buy cheap stocks at some point in the future, should ask whether any company whose stock has recently been crushed by this market will ever make another sale. If the answer is yes, as it will be in most cases, and the stock has been battered beyond reason then that may be a stock, which is worth considering as a potential buy at this point or soon. So here is some actionable intelligence:

Bond traders love recessions because recessions are non-inflationary and so the value of bond holdings don’t get eroded as easily as it would in times of a growing economy or during times of inflation.
That said, the U.S. 10year Treasury note yield (TNX) delivered a stunning visual to those of us who read price charts for a living as its yield fell to new lows (see chart below).  But it was not alone, as by the end of the trading week, the U.S. 30-year Treasury bond yield had broken well below 2%. That means bond traders are pricing in a big recession. 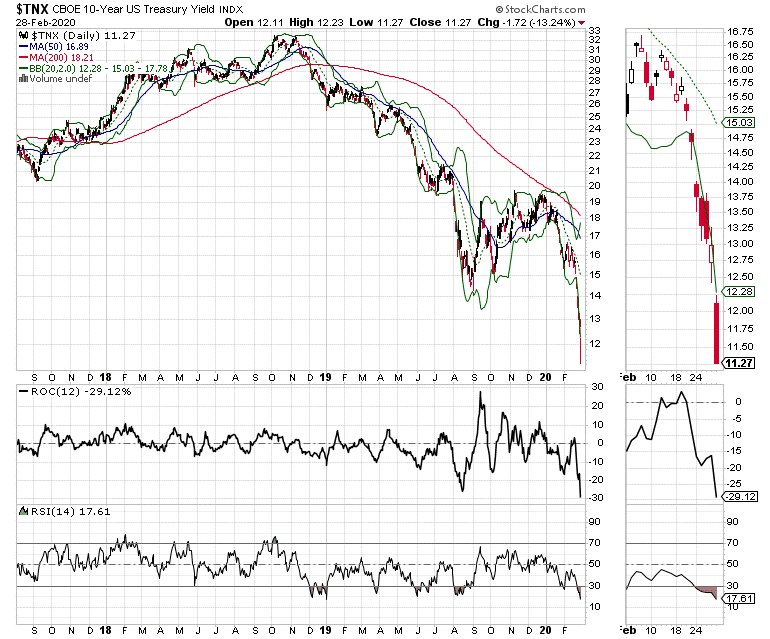 Moreover, falling bond yields have until recently fueled a multi month rally in homebuilder stocks. But even our recent favorite, the demographically well placed KB Homes (KBH) seems to have lost some of its mojo, which makes you think that bond traders are not alone in pricing a very slow economy in the not too distant. Potential homebuyers are clearly plugged into the news cycle as they glance at their 401 (k) plans and the market is factoring that into their expectations for homebuilder stocks. 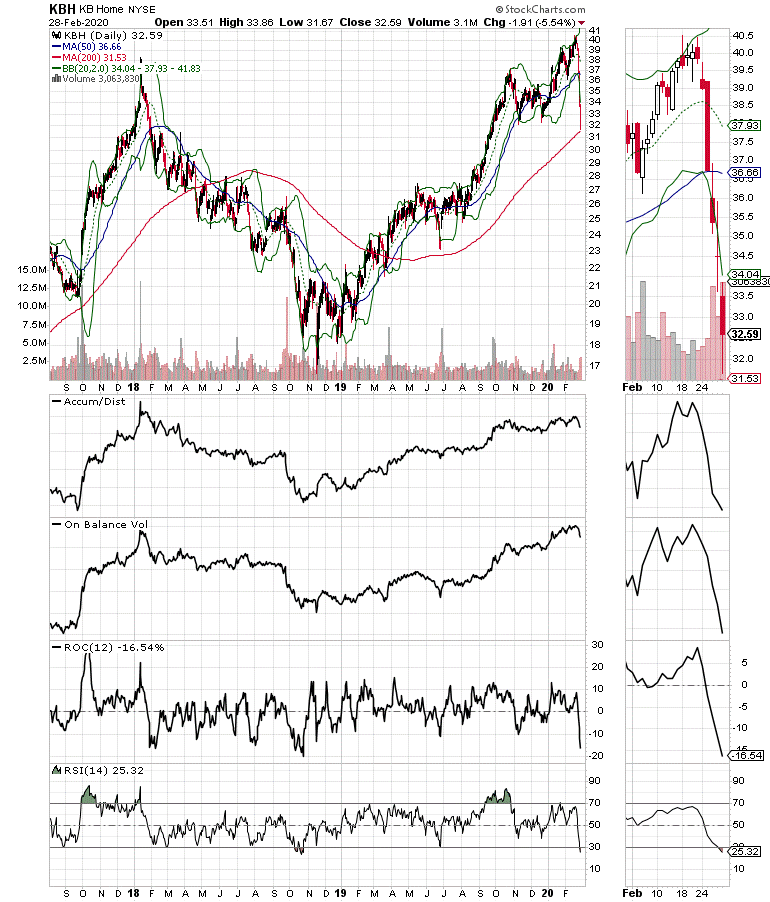 So, the question is, will KBH ever sell another home? The logical answer would be, of course they will sell more homes in the future. As a result, investors should pay special attention to homebuilder stocks and their relationship to bond yields, as their price action could well be an important forecasting tool for the economy. In other words, if bond yields remain low and homebuilder stocks catch a bid in the next few weeks it may be a very positive sign for the overall economy and a signal that maybe the worst is over for the markets. If bond yields remain low and homebuilders don’t rebound, we may be in for something very unpleasant.

The New York Stock Exchange Advance Decline line (NYAD) which gave us a lukewarm sell signal before the recent decline in stocks is ripe for a bounce as illustrated by an oversold reading on its Relative Strength Index (RSI) while ending the week of Feb. 28 trading outside its lower Bollinger Band. 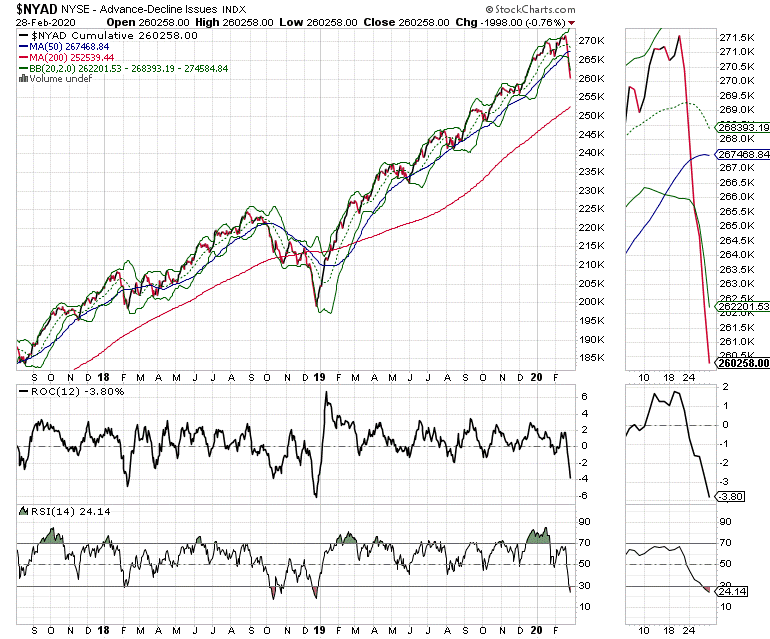 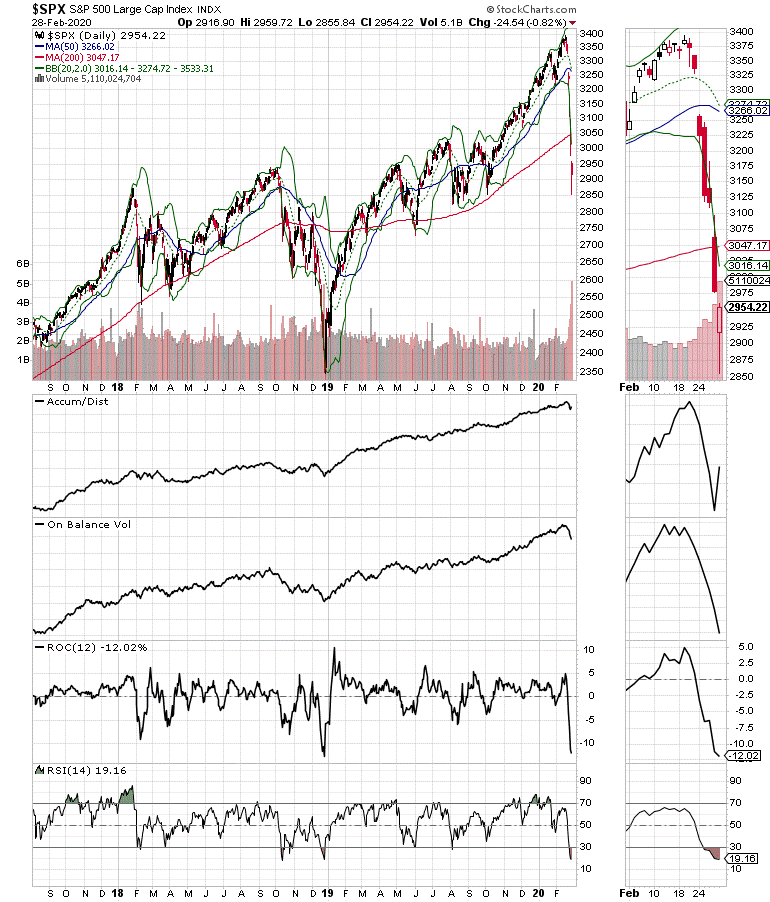 The S&P 500 and the Nasdaq 100 both fell below their 50-day moving averages but found support at their 200-day lines. That means that the 50-day lines are now important resistance and that any bounce should take prices above those resistance areas before the market gets an all clear. Moreover, if the 200-day moving average gives way then there is likely to be a fair amount more damage than what we’ve already seen.

Don’t Rush into Anything

Anything is possible at this point as the stock market is caught in a battle between chaos, the Coronavirus and Complexity (the Fed and the oversold state of stocks).

Clearly the amount of bearishness sentiment and the recent decline in stocks creates the conditions for a potential buying opportunity. Monday’s rebound, while impressive was predictable and doesn’t mean the pain is over or if a bottom was struck. We certainly know that cheap stocks can always get cheaper and that there is no point in getting in front of a high speed freight train. As a result, even as we compile our shopping list, it’s best to see what the central banks do and how the markets react before putting any money to work on the long side.

Joe Duarte is a former money manager, an active trader and a widely recognized independent stock market analyst since 1987. Hear him talk about picking the right stocks and technical signals for options traders at the recent Orlando Money Show. He has identified several interesting stocks and have included them in this week’s Portfolio Summary for subscribers. These picks include precise entry and exit points as well as well-placed sell stops. For a Free Trial and an in depth look at this exclusive BUY list go here: https://joeduarteinthemoneyoptions.com/secure/order.asp