No matter what, you can’t go wrong with lots of cash as there is no clear bottom in sight, writes Joe Duarte.

As the rally we saw on Friday afternoon faded into another circuit breaker open Monday, investors endured another bought of pain. If instead of a true bottom, V or otherwise, and the start of a lasting up leg turns out to be a return to the down trend, we may be at the starting point of a major bull trap. Smart investors should prepare for both scenarios and be ready to act accordingly as things could go either way.

Global stock markets have been pummeled by the Coronavirus and the situation on the ground, especially in Europe where events seem be spiraling out of control and in the United States, which maybe on the cusp of a large increase in cases as more testing is implemented. Moreover, while things can certainly get worse all around, the market was extremely oversold last week, just as global central banks began flooding the world with money. This created a perfect scenario for a dramatic bottom if there was a positive event, such as the algos’ apparent perception of President Trump’s state of emergency press conference.

The problem is that even after Friday’s rally, the news got worse over the weekend. Therefore, as we’ve seen before during this decline, Friday’s bounce was wiped out Monday.

Furthermore, the daily grind and the tragedy of the Coronavirus pandemic have certainly taken its toll on investors and everyday people in the Markets, Economy, and Life (MEL) complex adaptive system – consumer confidence is declining, stores shelves are emptying, businesses are closing.

Certainly, much of what the future holds remains unknown as states of emergency spread across the United States and the world and governments deploy extraordinary measures. Still, this situation will improve some day, and there will be some sort of return to normalcy, which is why as investors we must look both to the present and the future.

This is one of those times when it will pay well to consider what a wise investor once said: “It’s more about the return of your money than the return on your money.”

Bearish sentiment, before Friday’s rally, was at a point of despair as I’ve never seen before. For example, the CNN Greed-Fear Index registered a reading of 2 recently. That means that there was no greed left in the market and that total fear ruled. Even more impressive was the record rise in mutual fund cash ever registered as investors fled stocks. Accordingly, with so many bears around, cash piling up on the sidelines, along with the encouraging set of technical findings that I describe below, if this isn’t a prelude to a meaningful bottom then this time is truly different and what lies ahead is unimaginable.
Meanwhile we are seeing blue chip company stocks being destroyed by non-stop machine selling. Thus, as investors looking to the future, we must ask one question: when this is over, is it likely that company X, if it survives will continue to flounder? Or is it more likely that its sales will increase dramatically as pent up demand kicks in? Moreover, if management has made good decisions through this period, won’t there be companies that actually thrive?

The answer to both questions is that some will continue to flounder and some will perish. Yet, there will be those companies that thrive as their products, especially after the public has had to do without them for a period, will be in high demand. And those are the companies which will likely lead the charge when the market rebounds.

Exxon Mobil (XOM) with an early 10% dividend yield is trading as if no one will ever fill their tank again. They will and XOM is one of a group of stocks that may be offering an opportunity. (Look for a more in depth outlook on XOM tomorrow).

The New York Stock Exchange Advance Decline line (NYAD) found tentative support at its 200-day moving average on Friday March 13 after making a new low for the current decline and breaking below the key technical gauge on the prior day. This reversal around the 200-day moving average concurred with the third tagging of the relative strength index (RSI) 30 level (oversold) and what seems to be a higher low on the rate-of-change (ROC) indicator than the prior low of the current decline (see chart). Please don’t put a great deal of stock (pun intended) in the RSI as a standalone indicator—markets, particularly in this environment, can remain oversold for long periods of time; however, RSI could be used to confirm other signals. 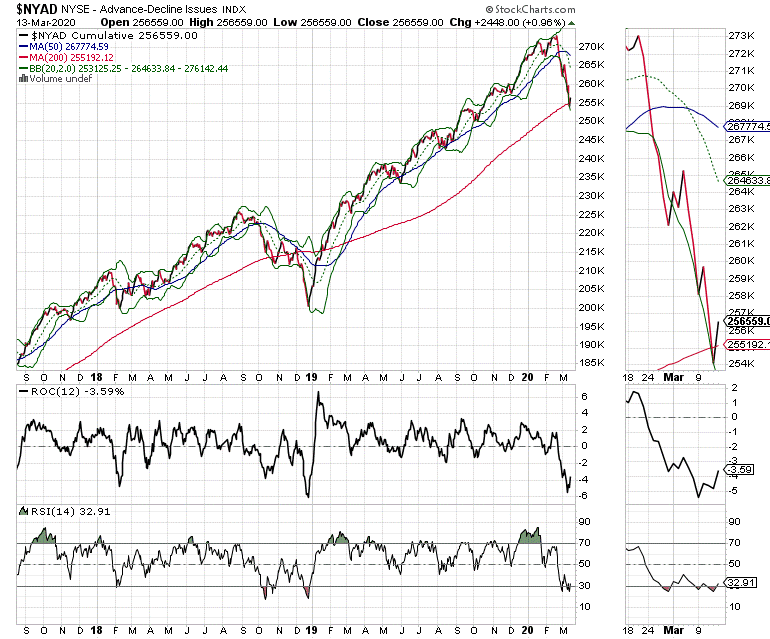 When taken together this group of technical indicators may indicate a tradable bottom. This type of analysis is what must happen for this bottom to hold true is that no further lows are made in the market and that a credible rally springs from these levels and lasts more than a day or two. If the market fails to shake off the bears and breaks to new lows then it would likely negate this potential bottom and what follows could be a new set of lows. 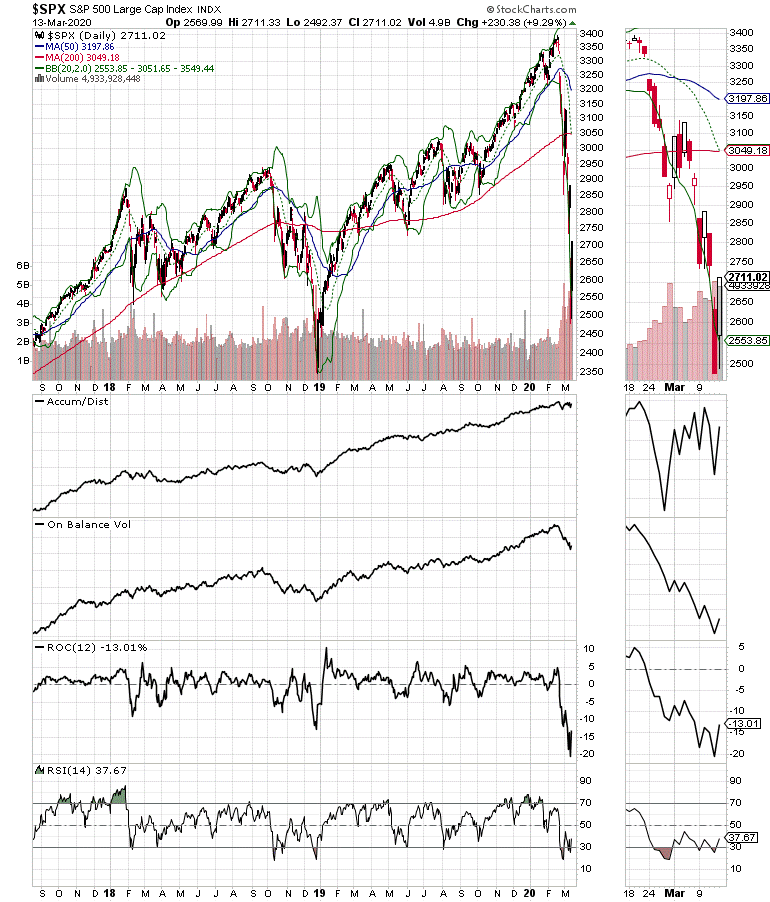 Meanwhile the S&P 500 (SPX) and the Nasdaq 100 (NDX) indices bounced back as well. But with both indices trading well below their 200-day moving averages, they remain in bear market territory. With lower lows on Monday, the bears have won the short term battle and the market will have to try again in the future. 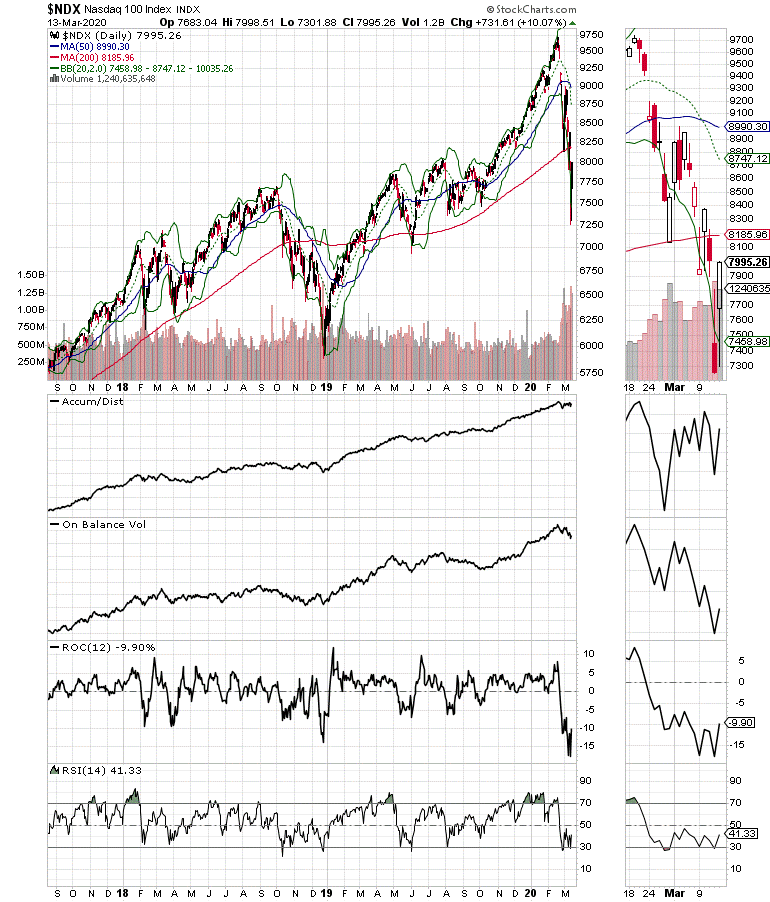 So, what is the most important thing to watch? How about the U.S. Ten Year note yield (TNX), which fell to record lows last week and began to rebound on Friday before dropping (bond rallying) again on Monday. The big question is whether the rise in yields, which means people are selling bonds, is because investors are breathing a sigh of relief or because the bond market is malfunctioning due to poor liquidity. If it’s the latter, there will be bigger problems ahead. 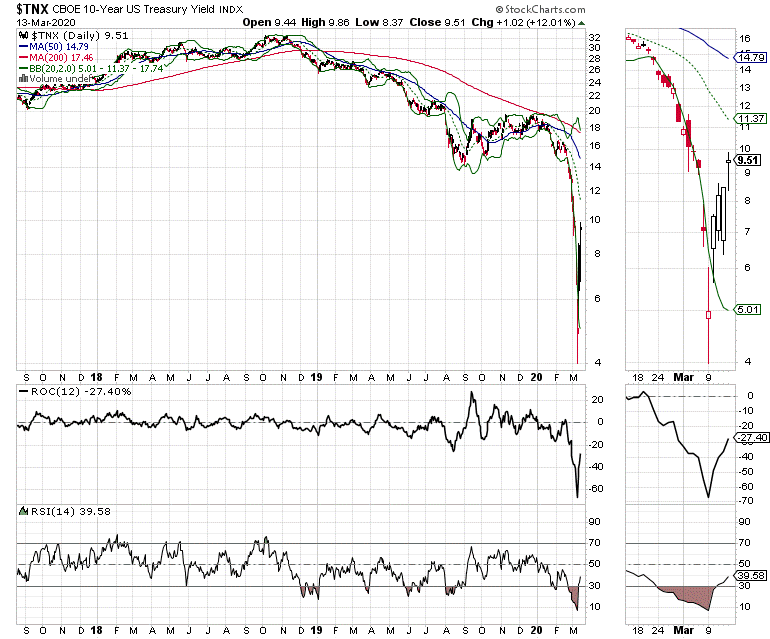 The bottom line is that the action on Friday March 13 was a short term positive but the real trend will likely depend on what happens this week and beyond. It is clear that the market has not fully priced in the impact of the Coronavirus (we still don’t have a measure of how serious this will grow to).

Those who bought the market at the last hour on March 13 and kept their positions over the weekend, lost their shirts this morning. That’s because if this doesn’t turn out to be the bottom then we’ll be in the grip of a bear market rally and a subsequent and potentially worse down leg.

As a result, it makes sense to deploy some cash if the market follows through on the 3/13/2020 action but not to be too aggressive until the all clear signal is given. It’s also a good idea for those who venture into the market to keep positions small, to use prudent sell stops and to plan for the worst, just in case. For now, the jury is still out but those who are nimble may be able to carve out a profit in the next few days.

I am developing a list of companies that meet these criteria at Joe Duarte in the Money Options.com. If you’re not a subscriber yet take a 30-day Free Trial HERE.

Joe Duarte is author of Trading Options for Dummies, and The Everything Guide to Investing in your 20s & 30s at Amazon. To receive Joe’s exclusive stock, option, and ETF recommendations, in your mailbox every week visit here. I’ll have more for subscribers in this week’s Portfolio Summary. For a 30-day Free trial subscription go here. For more direction on managing the GILD trade, go here.

General Dynamics Corporation (GD) is one of the major prime defense contractors. The stock price is ...

This medical related stock could benefit from increased resources dedicated to dealing with the Coro...