Big Move in Stocks is Near

Markets have shown signs of optimism but haven't given the all-clear to bulls yet, reports Joe Duarte.

The stock market is signaling that a big move is coming. And although there is no guarantee, it could certainly be an upside breakout. So, if the all clear does appear, investors should prepare to buy stocks.
Indeed, as I’ve said every week for the past three weeks, the Sunday night futures may well open limit up, limit down, or even flat, depending on the news flow over the weekend. But from a trading standpoint, it’s not so much about Sunday night or Monday’s action, but about what happens the rest of the week and the next month.

More than anything, however, if recent support levels fail to hold and confirmed new lows in stocks appear, the bear market will likely be fully back in business.

Bulls, Bears and What Lies Ahead

The bulls have two things on their side: liquidity – such as it is with the Federal Reserve waffling in the repo market - and overwhelmingly bearish market sentiment. The bears have a stalled economy and rising uncertainty about the future. Therefore, it’s still about whether the liquidity in the system can overwhelm the bad news; and how the algos adjust to the evolving landscape.

Be that as it may, in the post 1987 market, the word depression, lately being used in the mainstream media and elsewhere, has often been a contrarian signal to buy stocks. That’s because when it’s come up, it has usually been a prelude to massive Federal Reserve monetary policy easing. The problem now is that the Fed has been easing for all practical purposes since October 2019 when the repo market froze.

Interestingly, however, even though the D word is frequently being used and the Fed is “all in” all we’ve seen is a good three-day rally in response and nothing more.

Still, until proven otherwise by new price lows, stocks may have made a tenuous bottom; thus, the big move that seems to be on the horizon could well be to the upside. Nevertheless, caution is still warranted as the all clear signal to buy stocks aggressively has yet to appear. Thus, holding cash, while preparing to deploy it, is still your best bet.

Moreover, as far as I know, there are no active traders who have actually traded through a depression. Thus, algo programmers are now flying by the seat of their pants as they create the “if this happens do this” rules which will guide the machines through whatever comes next.

Whatever lies ahead in the stock market is likely to change life as we know it for a long time and very likely well beyond the trading screen.

A big rally in stocks may lie ahead, or not. So far, as stock prices have plummeted since January unemployment is skyrocketing, mortgage applications have collapsed, malls are closing, and the specter of looming loan defaults and bankruptcies is lurking. In addition, the bad news contained in the recent ISM and PMI data suggests a big hit to Q1 GDP is well on its way.

This, pure and simple, validates the founding principle in MEL; that the markets, the economy, and people’s lives and financial decisions are now one single system held in place by the paper wealth concept of the 401 (k) plan, the presence of a job, and buoyed by the ability to borrow such as in home equity lines of credit (HELOC). But what we don’t know is how the trading machines, which are the major determinant for stock prices and thus the main catalyst in determining the value of 401 (k) plans, will do next because we don’t know what the programmers are telling them to do.

My sense is that we are in for one of two scenarios. The first one (Luke Skywalker) is moderately positive and built on the thought that the machines will focus on the Fed’s easy money - the surge in liquidity and will buy stocks driving the indexes higher. This, however, may be dependent on whether anyone else actually buys stocks, since the machines accentuate the underlying trend. This positive effect, however, could well be limited, as it will be hard to hold on to stocks when the bad earnings parade starts in a short while.

The second scenario is the dark side alternative (Darth Vader), where the machines see that no one is trading, or that the news is so bad that liquidity can’t help, and completely walk away from the market. In this scenario, the shorts will increase, we would experience frequent flash crashes and extreme volatility as shorts are covered; a similar situation to what we saw when the markets went limit up and limit down on a regular basis a week or so ago. Moreover, we could see that type of roller coaster trading several times per day for weeks to months on end.

If we get Luke Skywalker then the hit to the 401 (k) plans would be lessened and the odds of a fairly solid recovery coming at some point would be above average, especially if people can get back to work. If the Darth Vader scenario develops, things will get a lot worse.

So, what’s the best way to play this? If I was an algo programmer, I would unleash the buy program to end all buy programs as the way to recovery for MEL will be via the 401 (k) plan wealth effect. It is certainly plausible.

The price of oil bounced in a big way last week. Of course, it could be a bear market rally and prices could well collapse again in the next few days given the potentially negative effect of weekend news reports that Russia and Saudi Arabia have reignited their production related feud.

Nevertheless, a couple of weeks ago, I noted shares of Exxon Mobil (XOM), the world’s largest oil company, looked interesting based on their near 10% dividend yield at the time and the fact that they were very oversold. Since then, the stock bottomed, especially as President Trump, President Putin and the Saudis floated some positive trial balloons about oil production cuts, which may have been short lived fiction. But then this is OPEC and Russia, so don’t bet your margin account on too many shares. 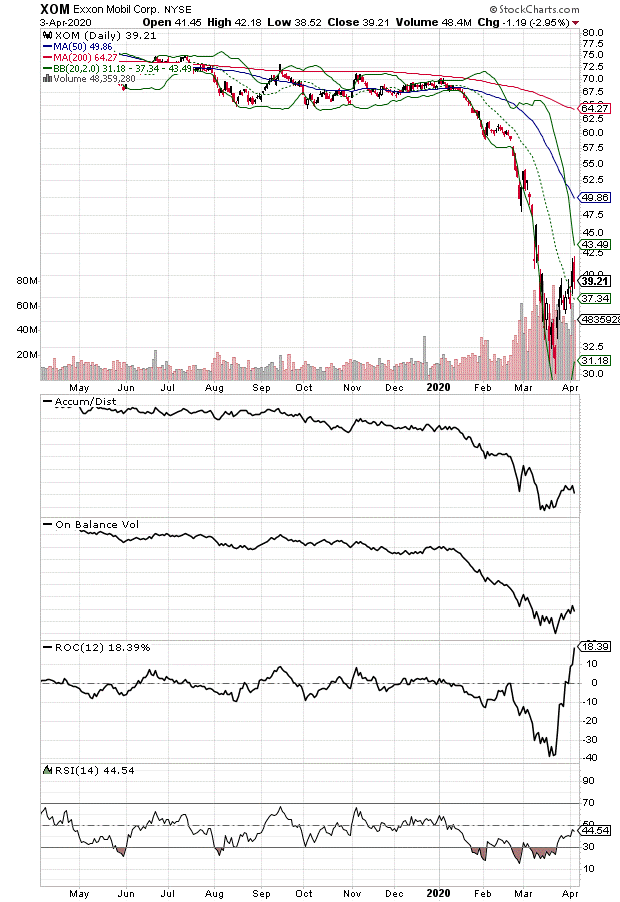 Still, Exxon is just one of many oil stocks that are littering the petroleum graveyard, and although any energy stock trade is likely to be a high risk proposition, there are now some seriously cheap stocks in the sector. Specifically, Exxon continues to form a base and is now testing the resistance of the $40 price area. If it can climb above this area, a move to $50 is not out of the question.

As I noted over the last couple of weeks, the New York Stock Exchange Advance Decline line (NYAD) was likely to test the resistance of its 200-day moving average. As of Friday April 3, that test has failed, which suggests that a retest of the recent lows is likely, unless something very positive happens. This could be followed by a new down leg in the market if the test of the lows fails.

Whatever happens, though, could be right around the corner as the Bollinger Bands around the 20-day moving averages for the NYAD and the major indexes are starting to get very tight, which usually signals that a big move is close. 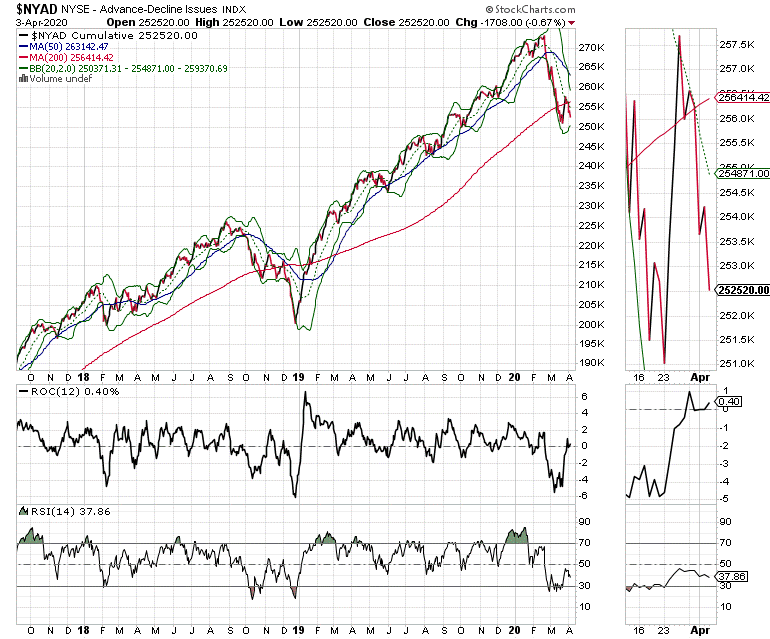 The S&P 500 (SPX) and the Nasdaq 100 (NDX) indexes both failed to cross above their 20-day moving averages and seem to be headed for respective tests of their recent lows as well. 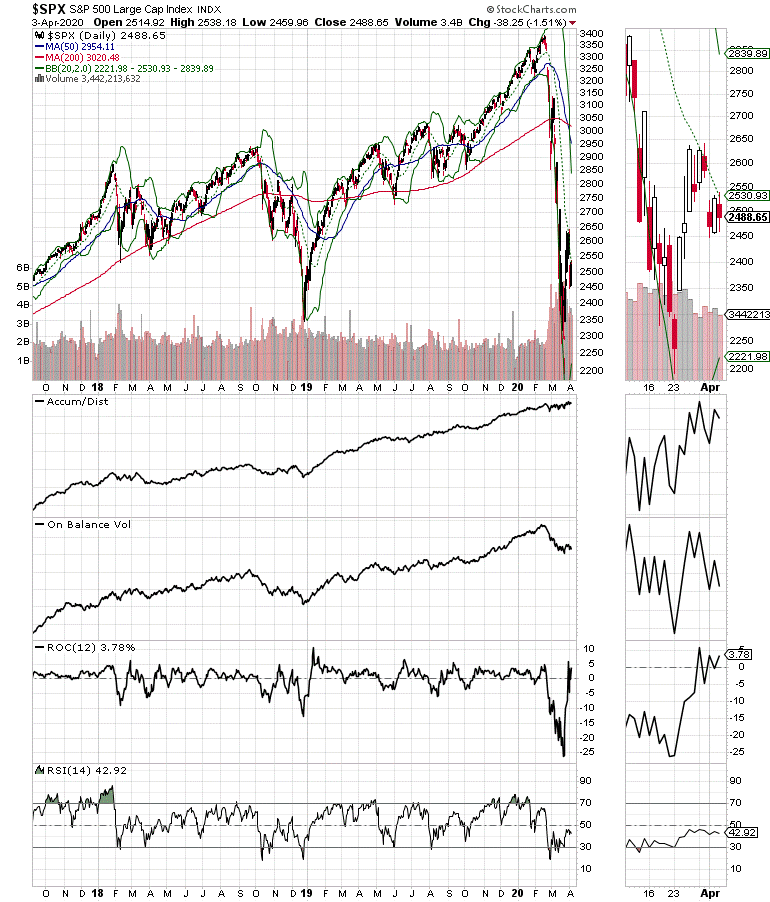 On Balance Volume (OBV) and Accumulation Distribution (ADI) were very disappointing on the rebound, thus the failure was not surprising. Critical support levels to watch are roughly 2200 for SPX and 6800 for NDX (see chart below). 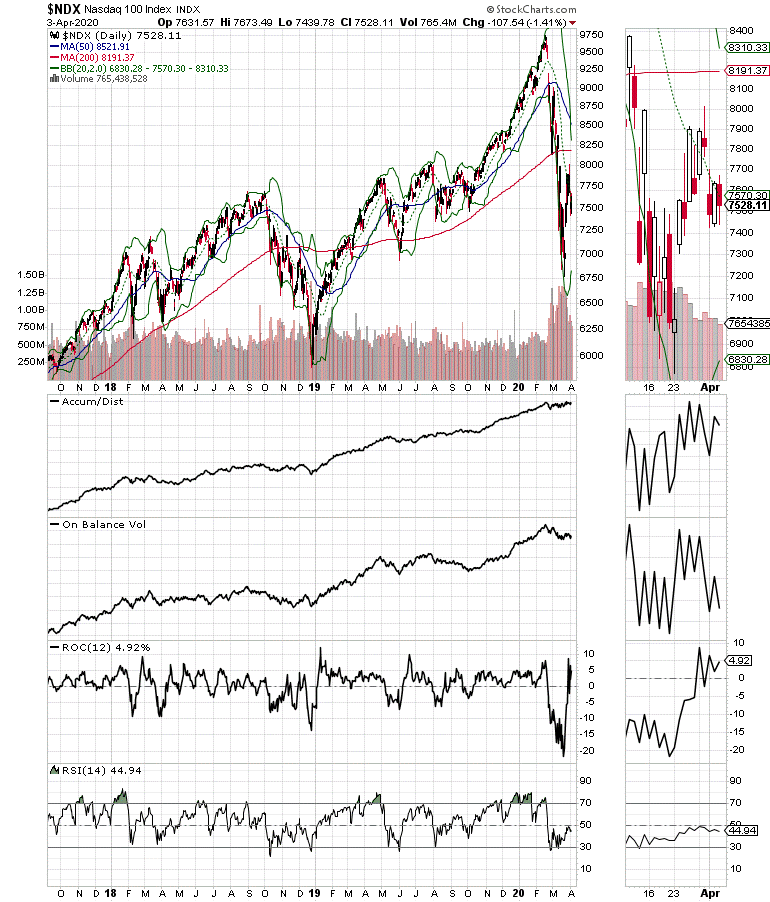 On the positive side, if the indexes do make new lows but the relative strength index (RSI) and rate-of-change (ROC) do not, then there would be the possibility that a positive divergence is in place and that, yet another attempted bounce may materialize.

It’s Always Darkest before the Dawn

Things are looking bleak, as they always do at the bottom. Of course, things can still get worse, and they may. But they can certainly change in a hurry, especially if the algos decide to juice the market in order to revive the 401 (k) plans, which is the only way to re-inflate the wealth effect and induce a U.S. economic recovery at some point. Sure, it sounds farfetched, but since it’s all about MEL, it’s plausible.

Certainly, job losses and the spreading of the economic contagion along with a worsening technical picture for the markets is of concern. But if their 401 (k) plans are improving, it will give them hope. Bottom line, since the markets are calling the tune for MEL, any recovery will likely be spearheaded by the market and its connection to the 401 (k) plans.

Only one thing is certain. Most of what happens next will depend on how the algos are programmed. Stick with cash until the all clear but be ready to act.

I am developing a list of companies that meet these criteria at Joe Duarte in the Money Options.com. If you’re not a subscriber yet take a 30-day Free Trial HERE.
Joe Duarte is author of Trading Options for Dummies, and The Everything Guide to Investing in your 20s & 30s at Amazon. To receive Joe’s exclusive stock, option, and ETF recommendations, in your mailbox every week visit here. I’ll have more for subscribers in this week’s Portfolio Summary. For a 30-day Free trial subscription go here. For more direction on managing the GILD trade, go here.

Copart: A Covid-19 Survivor
1 hour ago

Joe Duarte shares a unique stock that had outperformed the rest in the recent rally....

Alan Ellman breaks down what happens when a company decides to execute a reverse stock split....