Positive coronavirus news has created some winners and losers from the ranks of safe havens, reports Adam Button.

All currencies are recovering against the U.S. dollar and Japanese yen as stock indices rally world-wide on broadening signs of leveling off in the numbers of new Coronavirus cases and deaths in some global epicenters. Even the British pound (GBP) is regaining some ground, after having been dragged lower on Sunday’s news of Prime Minister Boris Johnson's admission to hospital with coronavirus. Monday Johnson was said to be in good spirits.

Gold and silver are at the top, while the Japanese yen (JPY) is the weakest. The Commodity Futures Trading Commission (CFTC) Commitments of Traders (COT) data showed an increasingly-crowded euro trade.

The action in metals is far quieter than in energy but shows a steady run-up in gold and silver on a combination of putting money back to work and reduced margin-selling. 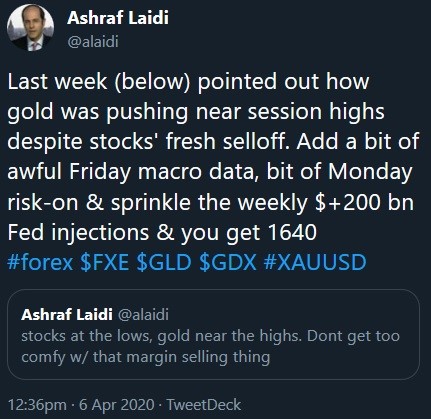 The other major weekend developments were at OPEC, where Monday's planned meeting was pushed back to Thursday. After the close on Friday President Trump said the free market could sort it out in a strong hint that the United States won't participate. Brent and WTI both opened down around 10% but the drama is likely to continue for a few days. Several OPEC members have hinted at cooperation and some countries outside of OPEC are sending positive signs.

One compelling argument to cut is that even with 10 million barrels-per-day less oil on the world market, the COVID-infected world is still vastly oversupplied. Even without U.S. participation there is a compelling argument to cut because it might mean $30-$40 oil instead of $20. For U.S. rivals, they can still bankrupt shale at those levels while cushioning the self-inflicted blow.

As we noted yesterday, it will be a headline-driven market and that's a constant pitfall.

Cable fell 40 pips at the open to 1.2230 on news that Johnson was in hospital after 10 days of persistent symptoms. A statement said the move was precautionary, but he will spend at least one night in hospital. There are all kinds of rumors about his health. There are multiple reports from other government officials that he has been working lately but the virus can worsen quickly. We prefer not to speculate on anyone's health but given the agonizing infighting among Conservatives, a prolonged absence would hurt the pound.

Speculative net futures trader positions as of the close on Tuesday. Net short denoted by - long by +.