Consolidation in major stock indices remain the name of the game, while the U.S. Dollar is mixed against the major currencies.

Silver, gold and the British pound (GBP) are the strongest and the Candadian dollar (CAD), Japanese yen (JPY) and New Zealand dollar are the weakest (see chart below for the July performance of major FX and metals vs USD).

The dollar continued its slump Thursday but nearby extremes in FX and other markets can't be ignored. 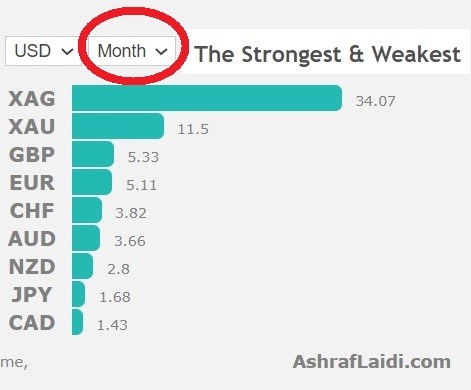 U.S. GDP fell a record 32.9% on an annualized basis in Q2 but as we pointed out last week, that was slightly better than the 34.5% consensus. Initial jobless claims were close to the consensus but remain stubbornly high at 1.434 million. Continuing claims also missed the 16.2 million consensus with a rise to 17 million. That comes with emergency unemployment benefits set to run out on last Friday.

Congress may be shifting towards a short-term extension of those benefits and that's something to watch in the days ahead (as of this writing, nothing has been done).

Another thing to watch is the turn of the calendar. August is a poor month for risk trades historically (meaning stock indexes). It's the weakest month over the past decade for the S&P 500 and Nikkei. It's also a strong one for bonds (that's negative for yields). U.S. five-year yield hit a record low Thursday and U.S. !0-year Treasuries are now flirting with its April low. That level held several times since the Coronavirus pandemic hit and a break below 0.54% would pave the way to return to the March sell-everything low of 0.30%.

With the weak risk averse tone, it's no surprise that August is a negative month for the commodity currencies. It's the softest for AUD/USD and NZD/USD second-softest for the Canadian dollar. The Australian dollar has easily been the best performer since mid-March, up more than 17%. Be wary of a pause or worse.

Another strong seasonal trend is in sterling where it's the second-weakest month in GBP/USD, and the strongest month for EUR/GBP. Cable has been on a sparking run to 1.31 but there is some resistance at the 1.32 and that will be a tough test after the one-way trip from 1.25.

What's Special about the WhatsApp Broadcast Group? The WhatsApp Broadcast Group consists of more frequent trade ideas and updates as well as signaling to members that Ashraf will be issuing a new trade action to the general Premium clients. In each of the winning Premium trades of the past five weeks (gold, silver, EURUSD, DAX), Group members were able to make more gains due to extra guidance via WhatsApp. Sign up through the link above.