Trend Remains up for Now, but Anything Is Still Possible

We are entering a traditionally bullish seasonal period in the stock market, and it is likely that the tradition of a bullish December into January period will play out right on schedule, states Joe Duarte of In the Money Options.

Certainly, this is not a market without risk. But for now, as I’ve noted here multiple times the bears have yet to prove their case convincingly especially when they are operating with the support of what could be the Mother of all Walls of Worry.

The Wall of Worry That Keeps on Giving

The late market master, Marty Zweig, whom I am paraphrasing, used to say: “the times when I’m most worried are the times when I’m not worried.” And as foreign as that may sound, this is a perfect market in which to use that tightness in the pit of your stomach as a sign that things are on or off track. In other words, that day in which you turn on your trading rig and start feeling smug and deliriously happy, it’s probably a good day to start raising cash. And to be honest, my stomach pit is as tight now as it’s ever been, which is why I’m still long this market, even as I crane my neck to keep an eye on the exit.

Yup, here is what’s morbidly encouraging: bull markets climb walls of worry and this one has a monster of a wall, which keeps on giving. Indeed, the more heartburn that circumstances create, the higher the market goes. And the cycle continues to repeat.

So, for the umpteenth time I will note that as long as the Federal Reserve continues to pump money into the banking system, the odds of stocks remaining in an uptrend are well over even. Still, there are plenty of things to worry about, which I won’t bother naming since we all know them by now.

Moreover, and here is something to consider as we continue to play the uptrend, there are now signs of capitulation by some permabears, whom I won’t name either as it is their change of tune, which gives me some concern. Thus, all I can say is don’t fight the Fed and the momentum, but always be aware that there may be something out there, which can pop up at any time and wound the bull market, if not mortally, then significantly.

I recently recommended purchasing shares of casual dining restaurant chain Brinker International (EAT), and I found the stock by kicking the tires. What I found is that Brinker’s management is finally, after all these years of being wallflowers, is showing some of the moxie of yesteryear when the company used to rule casual dining. In fact, what I’m seeing at the moment falls into the category of Brinker possibly becoming a MEL bellwether. MEL, of course is the complex adaptive system composed of the Markets (M), the economy (E), and people’s lives decisions (L). 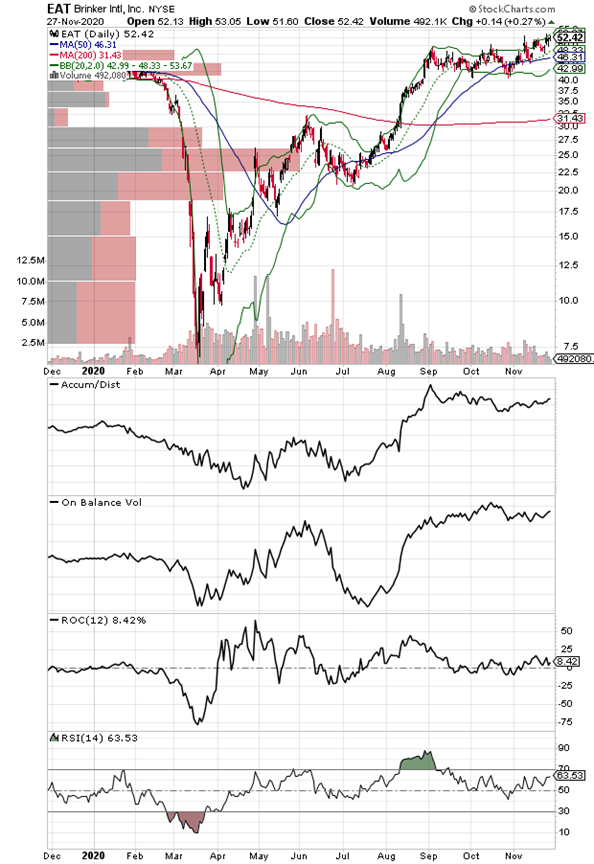 So, this whole thing began a few months back when I traveled to West Texas. Since the hotel restaurant was closed, I had to do takeout meals from nearby restaurants. Luckily, there was a Chili’s nearby and I ordered an Old-Timer burger. Now, I hadn’t been to a Chili’s in a long time, specifically, because the Old-Timer had lost its bite. The recent burgers were smaller than they used to be, and the price had gone up. This, of course, explains why over the past few years, Brinker’s stock had been down in the dumps, they lost touch with their customer’s needs; good food at a reasonable price. The bottom line is that they had lost their way and those of us who had been fans of their offerings for years just took our business elsewhere.

But here’s what happened. When I opened the bag, I saw an Old-Timer that looked like they used to; good sized, cooked just right, and actually mouthwatering. Indeed, the burger was about as good as I could remember. So, I did what I always do, I started looking at the stock. And at that time, it was just starting to turn around.

Moreover, as I dug deeper, and started going back for Old-Timers more often, I discovered that store traffic was up. People were actually dining in. More important, the take-out business was actually booming. In fact, my observations were confirmed during the recent company earnings call backing a quarter that handily beat expectations. The bottom line is that business bottomed out in September and that traffic, revenues, and order flow are on the rise.

Now, it gets interesting. While other restaurants are still struggling, Brinker, whose more upscale Maggiano’s brand is just now starting to bottom out, has added a new brand—It’s Just Wings, a virtual wings restaurant where Brinker does the cooking and Door Dash does the deliveries. According to the earnings call, the venture is on its way to doing at least $150 million in its first year, with repeat business outperforming expectations.

Technically, the stock is on the brink—pun intended—of what could be an explosive chart breakout with reliable support at the 50-day moving average, which can be used as an entry point on dips if the stock holds there. Accumulation Distribution (ADI) and On-Balance Volume (OBV) are both very encouraging and volume analysis and Volume by Price (VBP) suggesting there is no meaningful overhead resistance to contend with.

The bottom line is that as we continue through these Covid-19-influenced times, it pays to not just take a trip to West Texas, but also to get out and kick the tires a bit. Indeed, MEL is a complex adaptive system and until proven otherwise, it looks as if Brinker has found a way to adapt successfully to this Brave New World.

The New York Stock Exchange Advance Decline line (NYAD) broke out last week and followed up with several new highs, a sign that money flows into the stock market are picking up steam. We also got confirmation on the new highs from the Dow Industrials, the S&P 500, the Nasdaq Composite, and the Nasdaq 100. What this means, is that at the moment, the uptrend seems solid and the odds of higher prices are favorable. 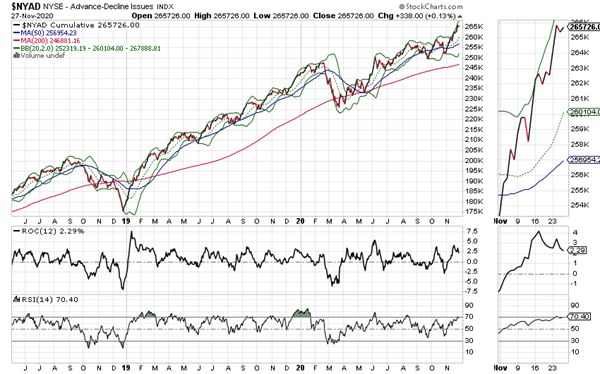 Also encouraging is the fact that the Accumulation Distribution (ADI) and On-Balance Volume (OBV) indicators for the S&P 500 (SPX) and the Nasdaq 100 (NDX) indices improved from the prior week’s softer readings.

Interestingly, this week I added the Nasdaq Composite (^COMPX) into my analysis and even that broad index is positive. Indeed things look a bit more encouraging as OBV and ADI are much stronger than would be expected given the large amounts of worrying in the market. 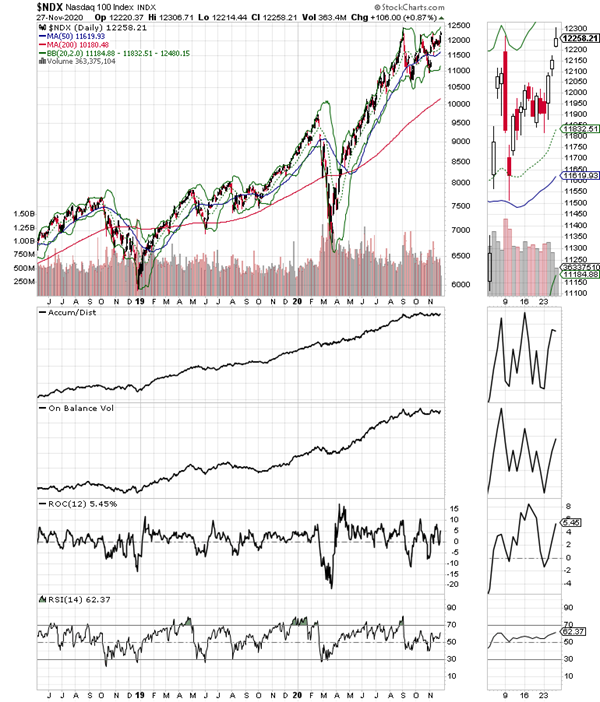 So, for now, the trend is up, and although we all know it can’t last forever, it’s foolish to fight the trend.

The stock market is picking up steam. And while that is a good thing for the bulls, there is way too much that can go crazy in a heartbeat, so some caution is warranted. Still, the Fed continues to put money into the banking system, which so far has proven to be a long-term positive for stocks. And since the Fed is not likely to change its posture for at least the next 12 months, it is plausible to consider the possibility that this bull market still has several good months left in it.

Of course, aside from the Fed, the other very reliable variable over the last six months has been stock picking and the willingness to take profits when you have big winners. In other words, the bull market is only as good as the stocks in your portfolio, the setting of precise sell stops, and the ability to see how MEL is evolving at any one time.