Current State of the State

To begin its ascent, the low for GameStop (GME) on January 26 was $80.20. The high two days later was $483. As I’m writing this on Wednesday morning, GameStop’s price was around $54, explains Jeff Greenblatt of Lucas Wave International.

Simply incredible. There is a silver lining here. On the one hand, the political activists will think twice about applying their inexperienced hands to trading. It’s a good thing institutions have been exposed to having their own bias.

On the flip side, if you don’t pay commissions, realize you are paying some other way, which ultimately is more expensive. I realize we live in strange times where even financial markets can be weaponized. But I’m old school, I have a problem with people who know extraordinarily little about trading engaging as if they were market wizards. Don’t get me wrong, they can do what they want but the reality of the situation is when inexperienced people start making money and headlines, it must be late in the game.

There is an iron rule when it comes to financial markets. Ten-year-old kids are not supposed to make $3200 trading GME, and we should not take trading advice from sports personalities. From the internet mania days, we learned by itself this condition is not the sell signal, but seasoned traders should have a problem with total neophytes making money at this game.

Let’s get back to reality.

We had a smaller degree square out last week in the Dow, which I called out at day 214 of the rally, which led to a smaller correction. At the same time, I’ve warned the bigger cycle is hitting later this month at the 233rd day of the rally since the bottom last year. 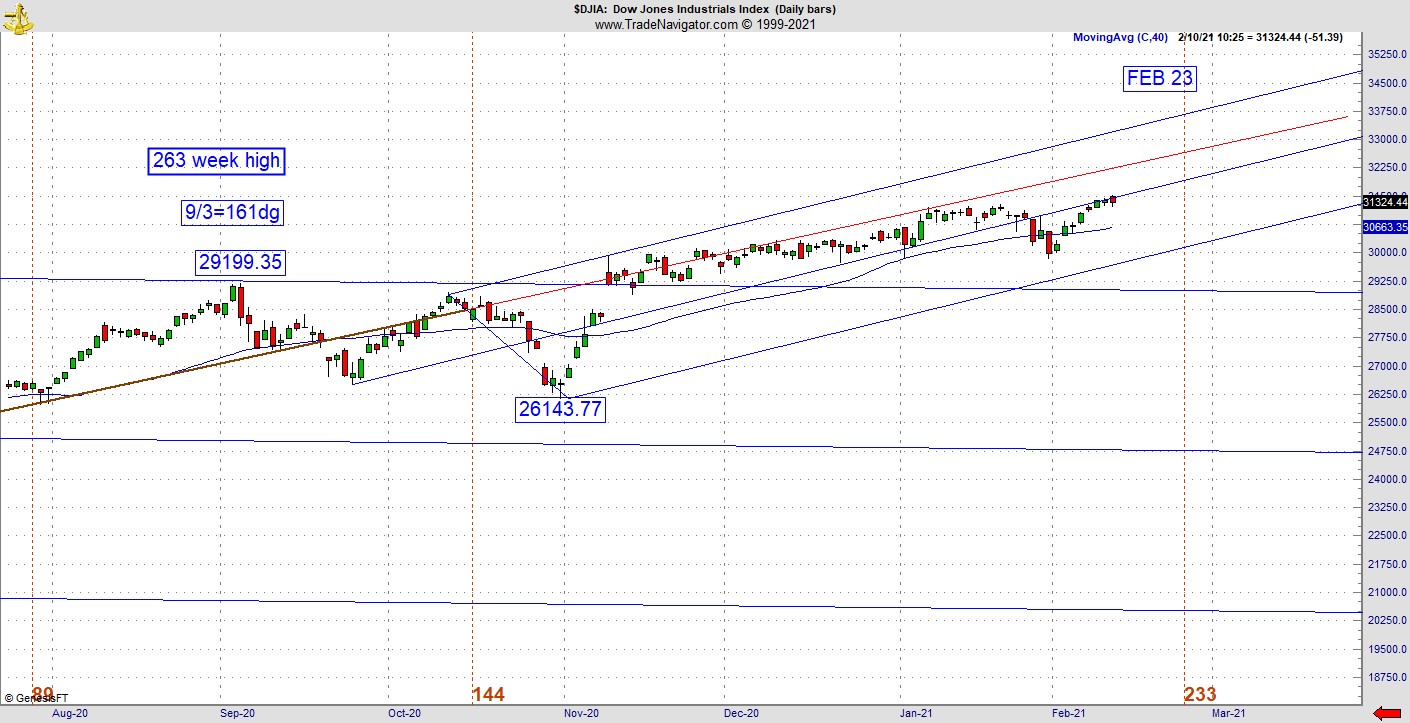 Here’s the near-term picture right now. Look at the brown line, which has that orange-colored extension. That is a magnet line that has influenced the action since June 26. Understand that magnet lines that act as support for a season will invert and become resistance and you can see how that worked out. The magnet line has been resistance while the midline of the Andrews channel was support until recently. Now resistance is in the form of this midline, then a retest of the magnet line and if it can make it through the upper channel itself. Depending on how these tests materialize may determine if the market can run out of gas when it comes to the 233-day cycle point. It appears the easy money in the stock market has been made. But don’t take it to be a sell signal, markets can hang on much longer than our bankrolls.

The next action concerned the silver market. Here’s how the attempted short squeeze has worked technically. The gap up and mania ended right at the top of the near-term Andrews channel. Now it is retesting the breakout while holding the horizontal line which has recently acted as a polarity point. 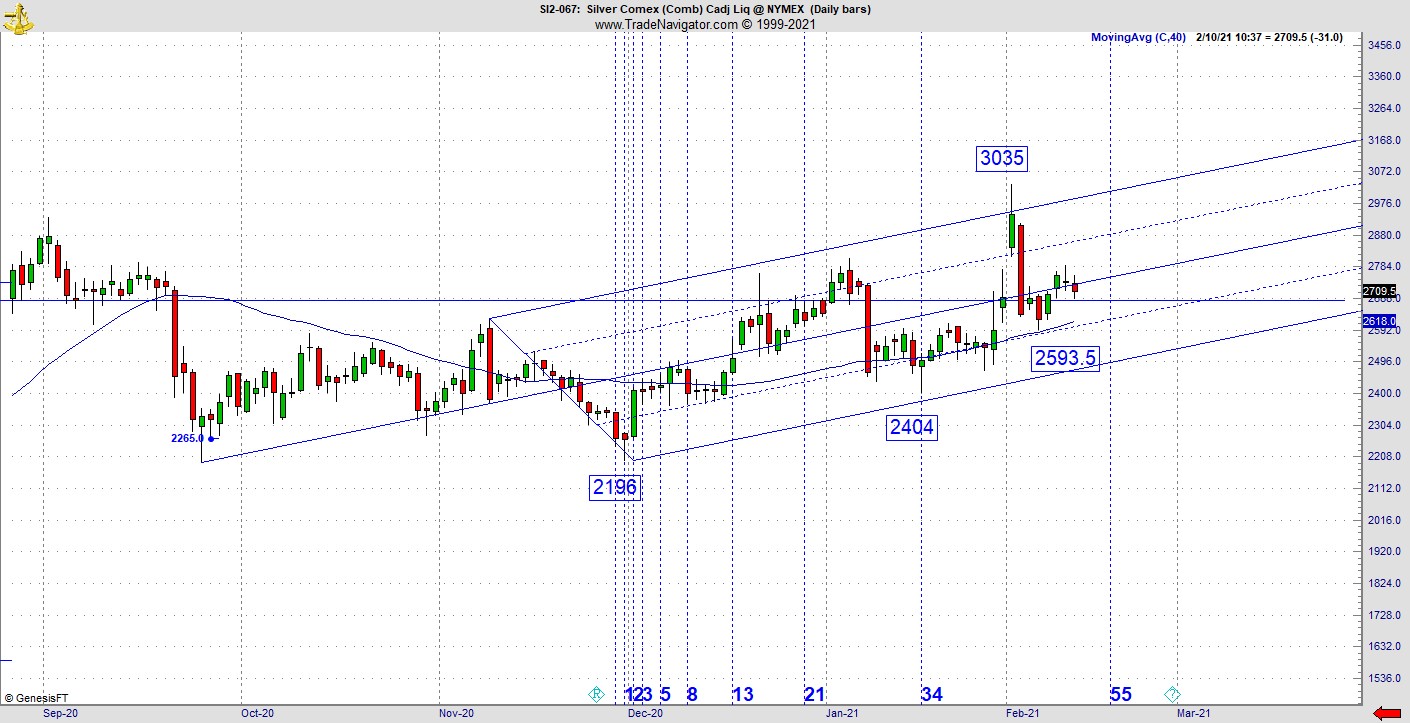 What was support back in August became resistance in January. Right now, we are where we were last summer. In one sense, it has done absolutely nothing. Considering how poorly the economy has performed, one would think the price should be higher. What usually happens after this latest reaction is a season of continued consolidation. Overall, if you are a long-term holder there is no sign precious metals have topped but it will require patience.

Finally, the easiest chart to follow at this point could be the US dollar, which got some follow through at the latest high pivot at 91.605, which was 2.675 lower than the prior high at 67 days so that Kairos was perfect. 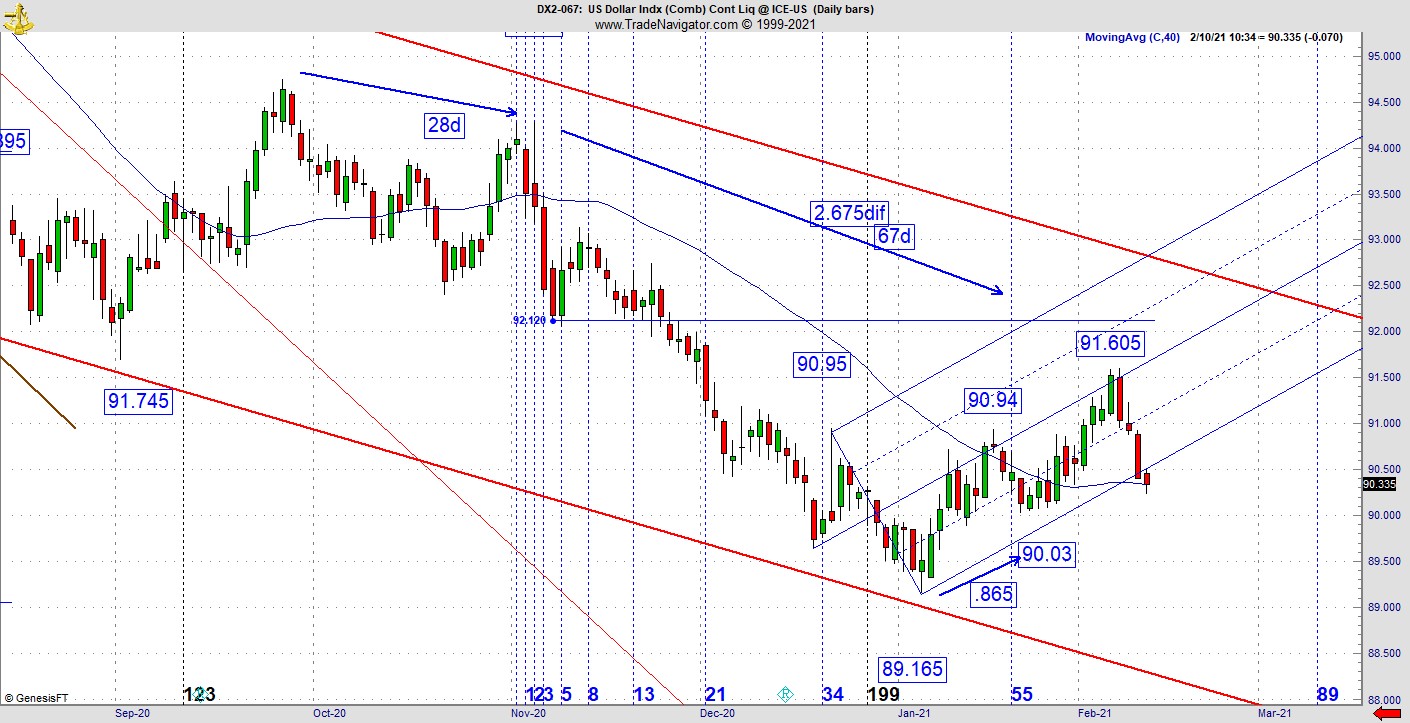 Right now, it has stalled to the downside at the bottom of the Andrews channel. If the greenback is going to turn up to get a fresh trading leg, it needs to do it soon. Odds do favor further downside, but I’ll go no further then suggest a retest of the low will be the inflection point of whether the dollar bear is truly active again. One thing I will tell you is the Kairos at these dollar high pivots has been very precise and I’ve seen the exact kind of action I’d suspect based on these square outs.

Now that I’ve spoken out about trading incompetence concerning GME, let me show how its done. There’s an adage, which states the better the move, the more the market hides its complex hand to be sure it’s not obvious. It’s true, I’ve been cataloging the setups to the better moves for quite some time. Here I’m going to show you how to catch them in real time. Here’s one of the better setups for Wednesday morning. I like what Greggory Mannarino had to say about trading. He says your job as a trader is not to pick tops or bottoms. Where else did you hear that? He says what we are supposed to do is recognize a trend and ride it even if you take small profits because they add up.

There were two incredible setups in the E-mini/E-micro. From the low at 3118 (118) there is a 222-point rise.  It dips down to 31233 at :33 after the hour. It was a nice little intraday trading leg. However, what came next was even more interesting. From the high at 340, the secondary was 318, which is a difference of 22. This comes on the heels of the 222-point range. That’s where it drops. Nobody even thinks to look at this. I work with traders all over the world. Many of the people I work with are amazed because they’ve never seen anything like this. In this case, if you rely on a retracement for your sell signal, you will miss this move. The only evidence you can sink your teeth into to understand your edge is recognizing that 22 vibration. Some of the people I’ve worked with fight it. It can’t be this easy. It can’t be what is driving the bus. 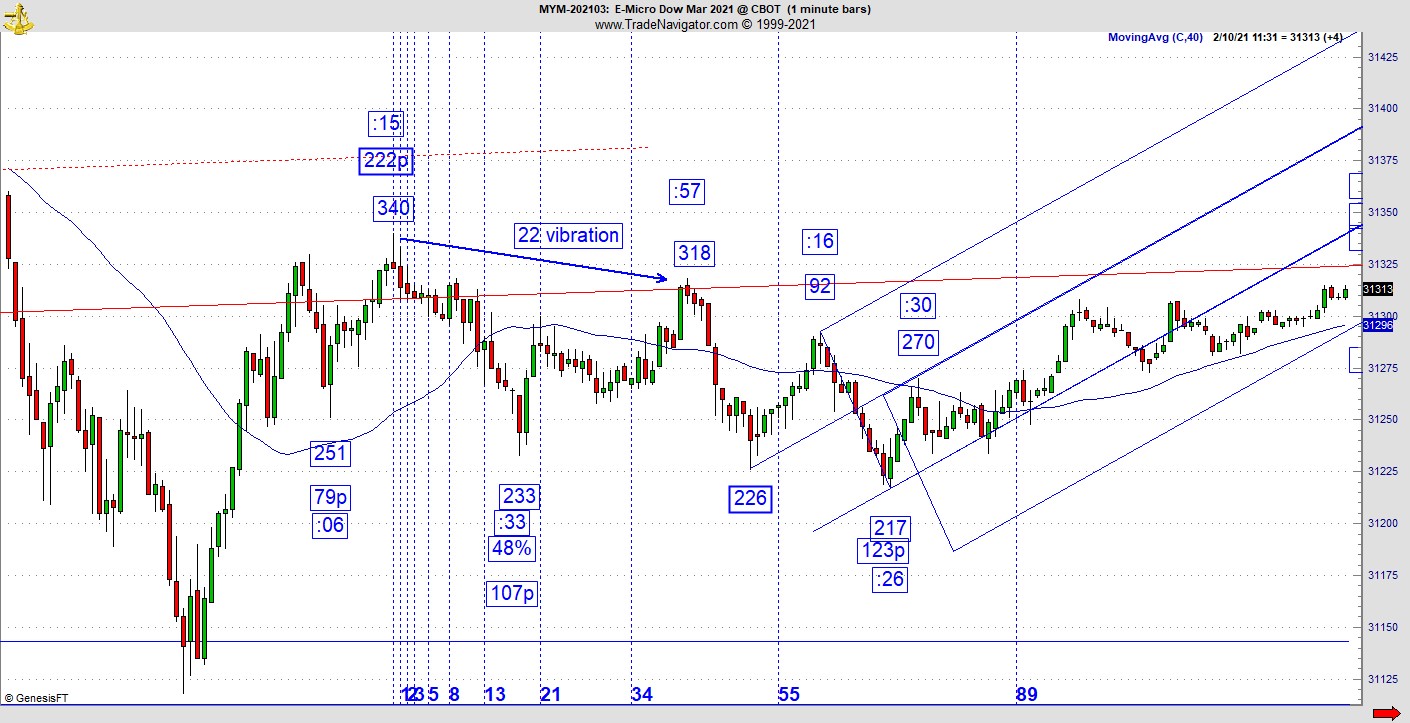 Let me be clear, this might be a simple concept, but it isn’t easy. One must develop lots of discipline and patience to wait for the patterns to set up properly. People come to trading from all walks of life. In most of them we get paid for doing activities whether it's office work, accounting, engineering, or digging ditches. In trading we don’t get paid for being busy, we get paid only for acting at the right time and performing as flawlessly as possible.