As I’ve suggested over the last two weeks, the stock market was poised for a breakout, states Joe Duarte of In the Money Options.

The odds for more gains in the short term are still well above average. As a result, I am still not bearish, but as time passes, it seems plausible that the market may change its general tone over the next few weeks.

Of course, much depends on what the Fed does, especially if it alters the way it buys bonds and delivers its QE. And there is emerging talk that changes are coming. Certainly, the biggest positive influence for stocks would be that the Fed increases the amount of money it puts into bonds, which is still an unknown.

Moreover, even if the Fed doesn’t change the amount of QE but directs its purchases toward key areas in the yield curve, the likely decline in interest rates which could result from these maneuvers could have a positive effect on key market rates, especially mortgages, which is why the homebuilder stocks are showing signs of life and the lumber stocks continue their bullish advance as I describe below.

Meanwhile, after a torrid March, volume in the options market had fallen off some, resulting in a slower trading pace for stocks early in the week, until Friday when the volume in the SPY options picked up, especially on the call buying side. This, in turn, tilted the expiration toward the bullish side as the dealers were forced to hedge their bets and, in the process, bought stock and stock index futures.

Subsequently, unless something very dramatic happens the Fed’s ongoing QE is more likely than not to keep the uptrend in stocks intact. That said, it seems that we may be nearing a point where some areas of the market will see more selling while others may see positive money flows. Thus, the bottom line remains that success will still be about selectivity.

The three weekly expirations (M,W,F) for the SPDR S&P 500 ETF (SPY) last week were mixed, with Monday and Wednesday delivering lackluster volume and generally sloppy directional conviction. But by Friday, the call buyers were more or less back in business and the directionally bullish expiration went off well for those of us long the market.

What this means is that for now, the market remains in the hands of the bulls and that the odds of higher prices remain well above average. Next week may be interesting as Friday’s monthly expiration would mark three weeks of very bullish action in the markets and could be an opportunity for the market makers to take some money off the table.

Flash isn’t always what makes a stock worth owning. And in the case of the shares of midsize IT and government contractor ASGN Inc. (ASGN) this is the take-home message for sure as the stock delivered a nice chart breakout on 4/9/21. Certainly, ASGN is not a household name, but it does have its house in order as its business recovers amidst expectations of increasing revenues due to government contracts. The company offers cybersecurity, web site design, artificial intelligence, management and related services to healthcare, government, engineering, technology, and life science sectors. 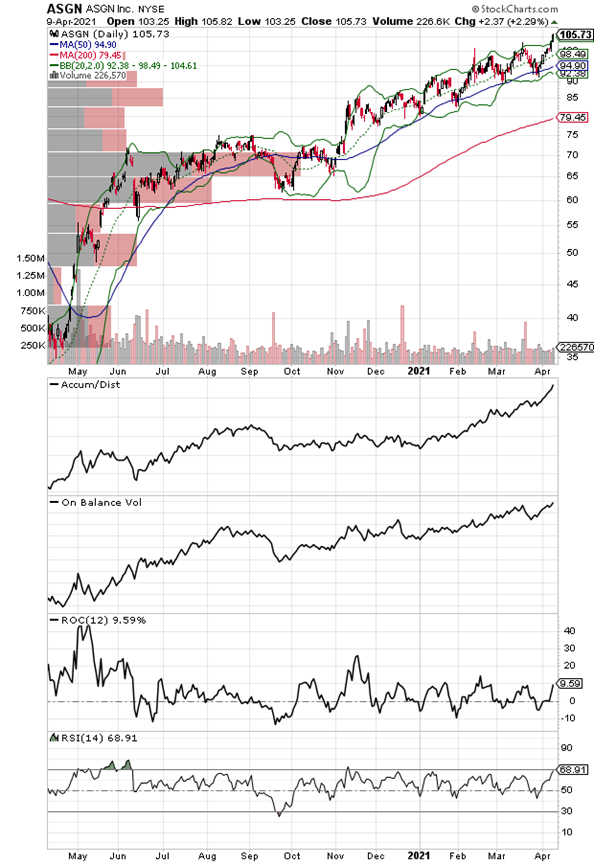 According to the company’s most recent earnings call, EBITDA and free cash flow for its most recent fiscal year were above analyst expectations but not above management’s expectations. In fact, the company’s moves during the COVID pandemic’s most troublesome period were more than adequate to continue and to deliver year-over-year growth in two of its business segments. Moreover, other areas of the business, especially due to acquisitions were able to show sequential growth and were nearing breakeven point.

Moreover, the company now expects to grow its business due to the White House’s push toward IT modernization in the government, especially in defense and social services. And, with a $2 billion contract backlog in place, and the addition of recent government contracts in place, the revenue stream should remain in good shape for some time.

The options data for ASGN is directionally bullish, which is a nice confirmation of its technicals where Accumulation Distribution (ADI) and On-Balance Volume (OBV) suggest the stock is under aggressive accumulation. A decisive move above $102 could take the stock 5-10% higher in the next few weeks, barring an all-out market meltdown.

I have positions in ASGN and MNST as of this writing.

The New York Stock Exchange Advance Decline line (NYAD) caught up to the S&P 500 (SPX) and made a series of new highs last week confirming that we are still in an uptrend for stocks. More encouraging is the fact that RSI has not moved above 70 for NYAD yet, suggesting that stocks can still climb further. Moreover, even if the 70 area is breached, the market can stay in that overbought state for some time. In fact, what we’ve seen recently is that readings above 70 are more likely to lead to consolidations not necessarily full-blown corrections. Of course, there is no guarantee that this will repeat, but it is worth noting. 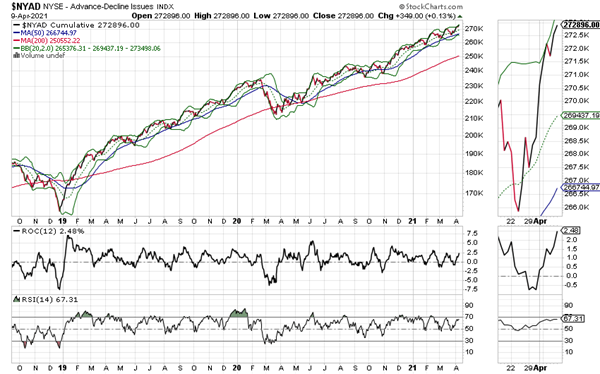 Thus, as long as NYAD continues to make new highs, remains above its 50- and 200-day moving averages and its corresponding RSI reading remains above 50, the trend remains up. This combined set of observations has been extremely reliable since 2016. 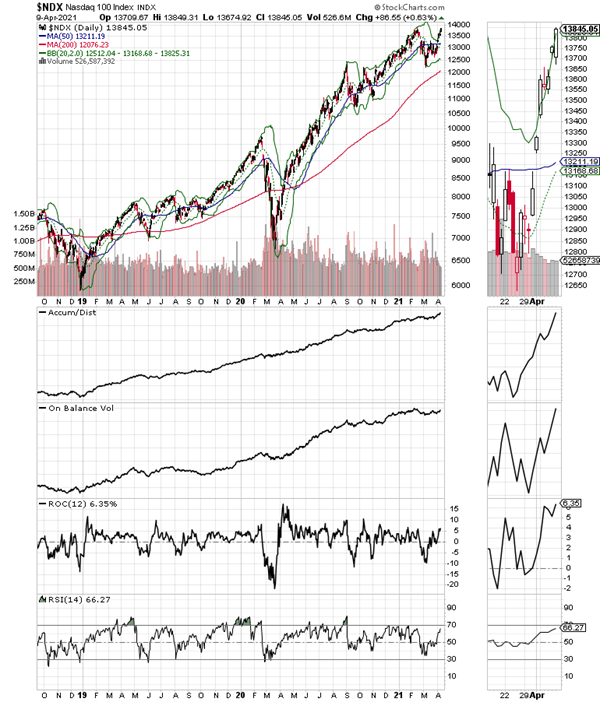 The Nasdaq 100 index (NDX), also caught up to SPX and along with NYAD has made new highs confirming the uptrend in stocks. 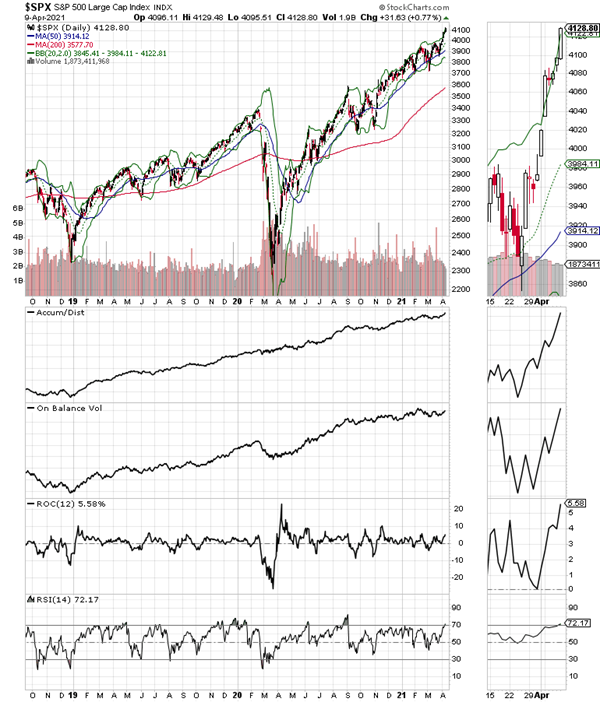 Big Move Ahead Likely in Bonds 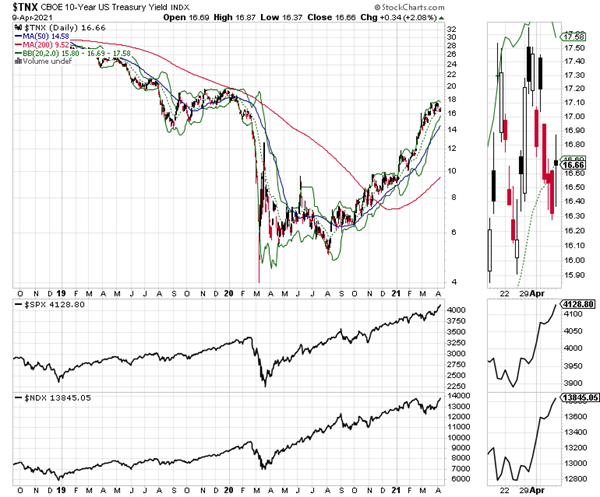 However, the US 30-Year T-Bond yield (TYX) has fallen less than TNX, which suggests traders are still concerned about inflation but given the potential for some difficulties in getting the infrastructure package through Congress, at least without some changes that could decrease its inflationary potential, TYX may consolidate in a narrower range.

Still, the key remains what happens if and when TNX reaches 2% and TYX reaches 3%, how the Fed responds, and then, of course—how stocks respond. For its own part, TYX is trading below its 20-day moving average with the Bollinger Bands shrinking and the bond ETF options delivering a neutral message. 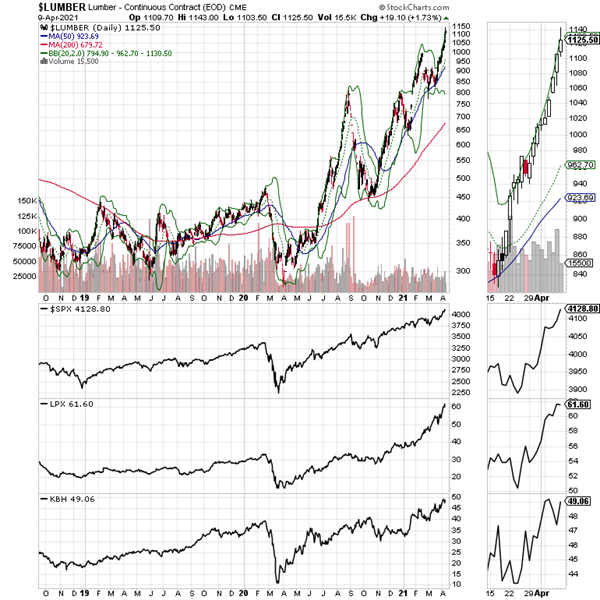 Finally, the price of lumber continues to skyrocket, which is pulling along the lumber stocks such as Louisiana Pacific (LPX) and homebuilders such as KB Homes (KBH). Indeed, supply, demand, and pricing power remain on the side of those two sectors of the economy, another example of how the markets, the economy, and people’s lives are intertwined in the MEL system.

To learn more about bonds, lumber, and homebuilders and more check out my recent Money Show presentation: The Trade of the Year. Check it out here.

I own shares of LPX and KBH as of this writing.